Making sure the issue becomes the story: problematizing the media coverage of sexual harassment at Makerere University 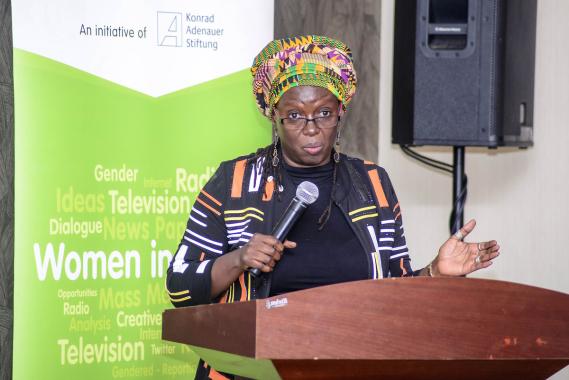 After a short introduction of women in media and the idea of the project by its Co-Convener Donnas Ojok, the audience welcomed Professor Sylvia Tamale, law professor and head of the committee investigating sexual harassment at Makerere University. Tamale presented key findings of the report on the investigation of sexual harassment at Makerere University, which identified the campus environment, abuse of power, lack of awareness, poor academic monitoring, abuse of alcohol and drugs and fear of jeopardizing careers as main causes for sexual harassment. Tamare underlined moreover, that the committee found no casual relation between the women’s dress codes and sexual harassment.

In a moderated question-answer session, Prof. Tamale shared her insights in how to dismantle patriachal pieces in society, how the committee investigating sexual harassment holds stakeholders in Makerere University accountable and how society can work on the role of women in media. Furthermore Prof. Tamare pointed out, that sexual harassment is not limited to Makerere universal but is a universal problem:

“We are talking about deeply rooted system, that women right organizations have been fighting for decades. We have to look at it like fighting different battles from different fronts. Whenever you try to explain sexism, replace sex with race and it will be easier to understand. Take for example an everyday situation in your workplace: If you are reminded of your skin color every single day, it is racism. It is the same with sexism: If your colleagues comment on cloths every morning, it’s sexism. But always remember, it has to be unwanted.”

Baine underlined the findings of the report on sexual harassment in Makerere. She mentioned that current structures, which tend to protect the harasser more than the victim, have to be changed but change is taking to long. Not the pain and justice of the victim but the fear of reputational damage and jeopardizing careers are still in the center of discussion. Additionally, power relations between students and lecturers make especially female students more vulnerable to sexual harassments added Baine, as the case of former student Rachel Njoroge shows.

In an emotional statement, Njoroge shared her story as a victim of sexual harassment by a former staff member of Makerere University. Njoroges described how her story became viral when pictures of evidence were leaked without her consent. Unintentionally, she was put into the spotlight and became a public figure.

“I could sleep because of stressed. I suffered from Trauma. I got people who were there for me. I could not convince the public, because everyone already had their own story. I wanted to go the media and tell them my version of the story, but Raymond told me: Don't mess with the little evidence you have. And that’s what I did. When you Google my name, it's all in the Internet. But I don't regret anything that I did, because I didn't do anything wrong. I am no longer a student. But what about the current students? I saved so many girls from this man.”

Investigative Journalist Raymond Mujuni accompanied many cases like Njoroges. He outlined, that media houses are always looking for stories that sell. Victim shaming and telling of sexual harassment as love stories are common. Mujuni stressed the importance of responsibility of the public and journalists to call media houses out. Furthermore, Mujuni encouraged journalists to handle cases of sexual harassments as sensitive as possible: “As a journalist you have to protect the victim to such an amount, that it almost seems unbalanced. You have to make sure the issue becomes the story, not the person becomes the person.”

Overall, the event created a safe space that enabled organizations, University representatives and individuals to talk about a sensitive topic. Therefore, the theme night was a success. 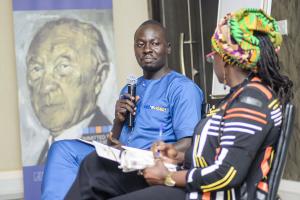 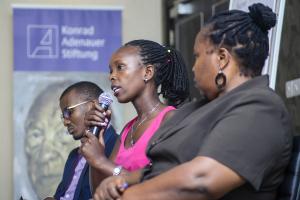 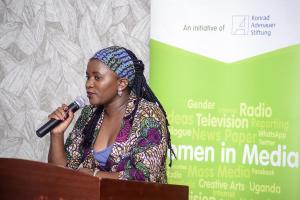 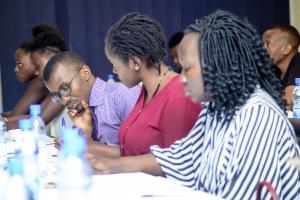