In South Sudan, cultural diversity is often identified as one of the main problems in the ongoing civil war. Yet, culture is also one of the most underestimated social tools in conflict resolution. Because of this, members of different South Sudanese groups came together in Kampala to talk about the positive role of cultural diversity in South Sudan and how to use it to make the freshly signed Khartoum Declaration work.
24. September 2018 Bestellinformationen 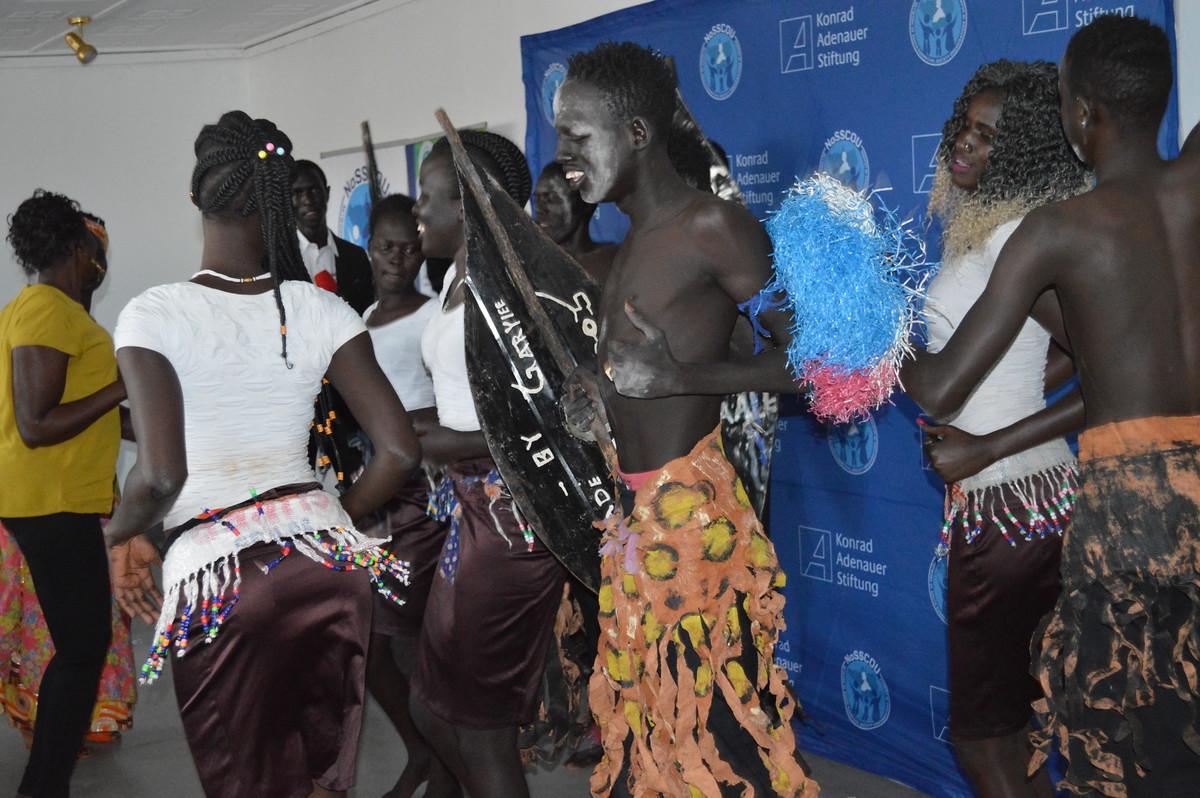 “Cultural diversities can be easily blamed for conflict. But we don’t share this thought. We think that it’s an asset and can help South Sudan to acquire peace. And what this country needs the most is peace!”, said KAS Programme Officer Donnas Ojok on Friday, the 21st September, in a cultural dialogue in the Uganda National Museum.

Daniel Joul, lawyer and Executive Director of Joth Mayardit Centre for Peace and Justice (JOCR) agreed but also underlined the difficulties that come along with Culture: “Different cultures have different values, but all cultural values mean respecting human rights within the context of their own culture. Those cultural values keep us from killing each other. In South Sudan, the division in cultures and tribes is leading our thoughts and overpowering our capabilities to recognize the individuals within our cultures. And this has become a problem.”

In the absence of a common South Sudanese culture, Joul encouraged the South Sudanese to start identifying cultural similarities rather than to focus on the differences: “Right now, our cultures prevent us from pursuing what’s best for the whole country. We have turned our politics to matters of cultural conflicts. First we should decide on the similarities, then we can set the law! Therefore, the government should enable an intercultural dialogue as a precondition of democracy!”

Finally, Joul also acknowledge three main obstacles in the process: “First, people lack confidence in culture, second there is a lack of political will, which was already one of the reasons why ARCCS and the CPA failed, and third there is the lack of human resource and experts who are familiar with cultures.”

Within the panel discussion, Anyieth Job, a South Sudanese Anthropologist, opined that “there is no need to force 64 different tribes in South Sudan to conform to singular cultural practices, but rather these tribes can come together in their diversity to work together for peace and progress of the country.” Representative of the South Sudanese Development Agency Grace Andrua suggested to: “put together a common culture by a common language and a national dress code.

Community leader Lawrence recommended to change the deeply entrenched ethnicization of politics in South Sudan by education: “We need to educate the young ones about the values of cultural diversity and unity. We also need to educate South Sudanese in a different practice of culture, so we can become one country”.

Contrary to the common believe that South Sudanese don’t want to interact, the event showed that people are eager to engage. During the Q&A session, one participant blamed the government for intermingling politics and culture: “There is no misconception that one must first be a vice president or the president if their tribe are to have a share of the national cake. And this is not a good thing.”

One of the most outstanding conversations during the public dialogue was the role played by youth and women as preservers of culture. Amani Peace, a South Sudanese human rights activist, was emphatic about the need for the young generation of South Sudan to desist from holding on to negative cultural perceptions about other tribes. “Our parents tell us not to marry a Dinka, not to marry a Nuer... We need to stop living like our parents life and start living our own if we are to overcome the differences that separate us.“ Amani advised young South Sudanese to marry from other tribes if they are to truly appreciate the beauty and advantages of cultural diversities.

The event was closed by the performance of two South Sudanese cultural groups, who shared some insights into the traditional dances of the Nuer. All in all, the event organized in partnership with the International Youth for Africa (IYA), the Network of South Sudan Civil Society Organizations in Uganda (NoSSCOU) and the Makerere University South Sudanese Student Association (MUSSSA), was largely successful. It showed that there is a big interest and need for further engagement of different South Sudanese communities. 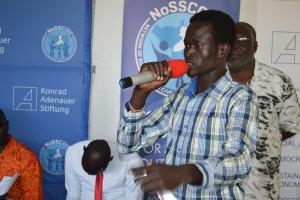 "South Sudan has a common identity!" - said one of the Audience in the Q&A session. 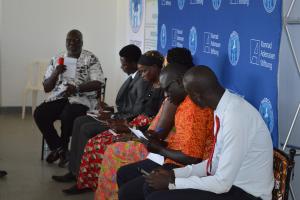 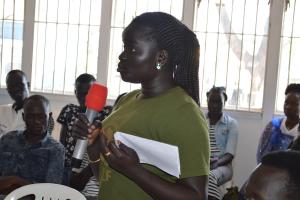 Machot Gai, representative of the Presbyterian Church in Kampala, talks about language as a tool for creating a common South Sudanese identity