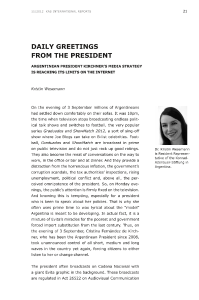 Daily Greetings From The President

According to Argentinean law, the government can transmit on television and radio broadcasters in grave, exceptional or institutionally significant circumstances. Nestor Kirchner, Mrs. Fernández de Kirchner’s predecessor and deceased husband, spoke to citizens by nationwide broadcast twice in his time in office between 2003 and 2007. The current president has made 52 of these broadcasts in the last three years. Opposition organisations have used the social networks Twitter and Facebook to call on people to disrupt the broadcasts with noise 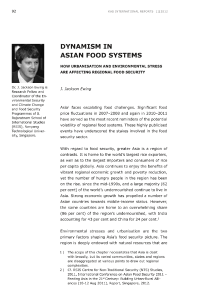 How Urbanization and Environmental Stress Are Affecting Regional Food Security

Asia faces escalating food challenges. Environmental stresses and urbanization are the two primary factors shaping Asia’s food security picture. The region is deeply endowed with natural resources that are valuable for agriculture, yet environmental stresses continue to threaten many key environmental systems and, by extension, future food production. Increased constraints on natural resources in Asia, such as land degradation and water scarcity, put severe pressure on agricultural sustainability and food security in the region. 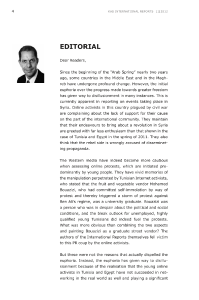 Since the beginning of the “Arab Spring” nearly two years ago, some countries in the Middle East and in the Maghreb have undergone profound change. However, the initialeuphoria over the progress made towards greater freedom has given way to disillusionment in many instances. This is currently apparent in reporting on events taking place in Syria. Online activists in this country plagued by civil war are complaining about the lack of support for their cause on the part of the international community. 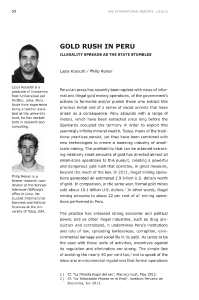 Illegality Spreads As The State Stumbles

In 2011, illegal mining operations generated an estimated 2.9 billion U.S. dollars worth of gold. Illegal mining operations can be found wherever there is gold, which is most of the Peruvian territory. In fact, a recent study found that illegal mining takes place in 21 of Peru’s 25 regions. The government has taken some tentative steps to face this problem, but with the political instability it is confronted with, has become passive and thus taken some steps backwards 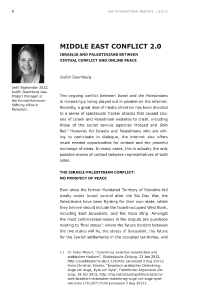 Israelis and Palestinians Between Virtual Conflict and Online Peace

The ongoing conflict between Israel and the Palestinians is increasingly being played out in parallel on the internet. Recently, a great deal of media attention has been devoted to a series of spectacular hacker attacks that caused dozens of Israeli and Palestinian websites to crash, including those of the secret service agencies Mossad and Shin Bet. However, for Israelis and Palestinians who are willing to participate in dialogue, the internet also offers much needed opportunities for contact and the peaceful exchange of ideas. 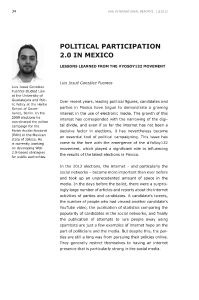 Lessons Learned From The #YoSoy132 Movement

In the 2012 elections, the internet – and particularly the social networks – became more important than ever before and took up an unprecedented amount of space in the media. The role played by Web 2.0 in the 2012 elections in Mexico cannot be assessed without bringing the #YoSoy132 movement into the equation. This phenomenon brought together the two elements of “youth participation” and “Web 2.0 tools” to enliven the political debate during the election campaign. 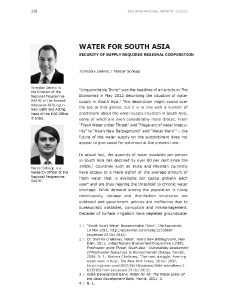 Decades of surface irrigation have decimated groundwater reserves in South Asia, and the water supply capabilities of the urban centres are becoming ever more overstretched. Added to this is the impact of climate change that is being felt already. It now seems that a threshold has been reached where regional solutions are indispensable. However, in spite of the frequently invoked cultural similarities, there has been very little regional integration in policy, economic and social areas. 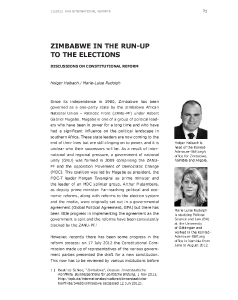 Zimbabwe in the Run-Up to The Elections

As a result of international and regional pressure, a government of national unity (GNU) was formed in 2009 comprising the ZANU-PF and the opposition Movement of Democratic Change (MDC). Far-reaching political and economic reforms, along with reforms to the election system and the media, were originally set out in a governmental agreement but there has been little progress in implementing the agreement as the government is split and the reforms have been consistently blocked by the ZANU-PF. However, recently there has been some progress. 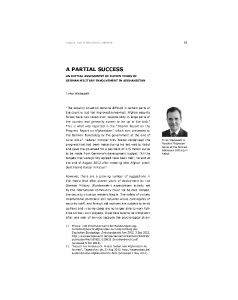 There are a growing number of suggestions in the media that after eleven years of deployment by the German army (Bundeswehr) expectations initially set by the international community could not be met. Indeed, the security situation remains fragile. However, it would be unfair to ignore the partial successes that have been achieved. In some regions at least, stability is possible, but it requires concentrated effort and continuity. Nobody wins if Afghanistan once again descends into chaos. Realistic assessments are needed. 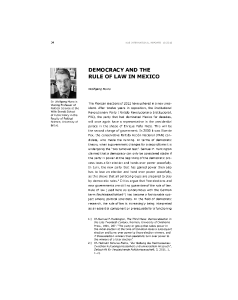 Democracy And The Rule of Law in Mexico

Modern Mexico officially laid the foundations for the rule of law with its constitution of 1917. From a legal positivist point of view, Mexico meets all the requirements of a constitutional state under the rule of law. However, all observers are unanimous in their belief that, despite these high standards, Mexican rule of law is in reality a morass of inefficiency, uncertainty and corruption.