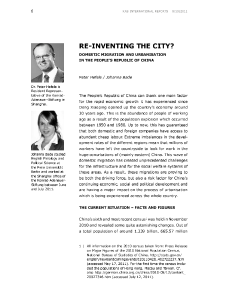 Domestic Migration and Urbanisation in the People’s Republic of China

Extreme imbalances in the development rates of the different regions mean that millions of workers have left the countryside to look for work in the huge conurbations of (mainly eastern) China. This wave of domestic migration has created unprecedented challenges for the infrastructure and for the social welfare systems of these areas. As a result, these migrations are proving to be both the driving force, but also a risk factor for China’s continuing economic, social and political development. 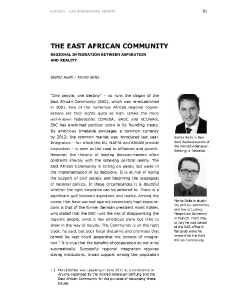 Regional Integration in East Africa – the Gap Between Aspiration and Reality

“One people, one destiny” – so runs the slogan of the East African Community (EAC), which was established in 2001. EAC has enshrined political union in its founding treaty. Its ambitious timetable envisages a common currency by 2012; the common market was introduced last year. Integration is seen as the road to affluence and growth. However, the rhetoric of leading decision-makers often contrasts sharply with the sobering political reality. 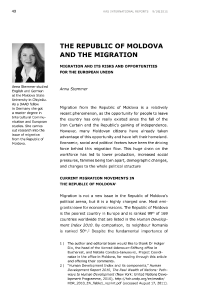 The Republic of Moldova in Focus: Migration and its Risks and Opportunities for the European Union

Migration from the Republic of Moldova is a relatively recent phenomenon, as the opportunity for people to leave the country has only really existed since the Republic’s gaining of independence. However, many Moldovan citizens have already taken advantage of this opportunity and have left their homeland. This huge drain on the workforce has led to lower production, increased social pressures, families being torn apart, demographic changes, and changes to the whole political structure. 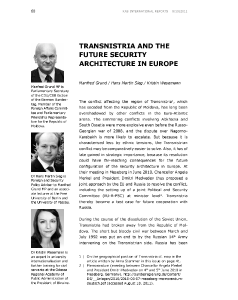 Transnistria and the Future Security Architecture in Europe

The disagreements affecting the region of Transnistria, which has seceded from the Republic of Moldova, has long been overshadowed by other conflicts in the Euro-Atlantic arena. However, the Transnistrian conflict has gained in strategic importance, because its resolution could have far-reaching consequences for the future configuration of the security architecture in Europe: Transnistria became a test case for future collaboration with Russia. 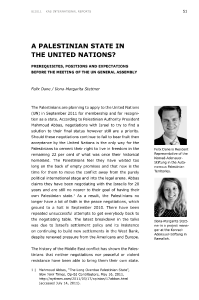 A Palestinian State in the United Nations?

Prerequisites, Positions and Expectations Before the Meeting of the UN General Assembly

The Palestinians are planning to apply to the United Nations (UN) in September 2011 for membership and for recognition as a state. According to Mahmoud Abbas, negotiations with Israel to try to find a solution to their final status however still are a priority. Still, the Palestinians feel that now is the time for them to move the conflict away from the purely political international stage and into the legal arena. Now they are trying to go down the route of international law. 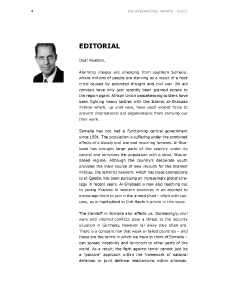 Alarming images are emerging from southern Somalia, where millions of people are starving. Somalia has not had a functioning central government since 1991. The population is suffering under the combined effects of a bloody civil war and recurring famines. A military solution alone could not solve the problems in Somalia. The acts of piracy off the region's coasts and the acts of terrorism on the mainland must be tackled via development policy measures. 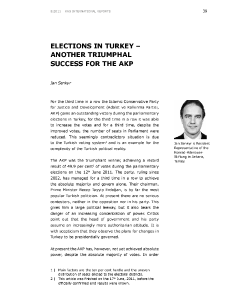 Another Triumphal Success for the AKP

The AKP was the triumphant winner during the parliamentary elections on the 12th June 2011. The party, ruling since 2002, has managed for a third time in a row to achieve the absolute majority and govern alone. Their chairman, Prime Minister Recep Tayyip Erdoğan, is by far the most popular Turkish politician. At present there are no serious contesters, neither in the opposition nor in his party. This gives him a large political leeway, but it also bears the danger of an increasing concentration of power. 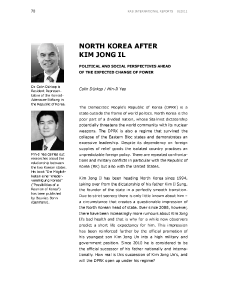 Kim Jong Il has been heading North Korea since 1994. Ever since 2008, however, there have been increasingly more rumours about his bad health, reinforced further by the official promotion of his son Kim Jong Un into a high military and government position. Since 2010 Kim Jong Un is considered to be the official successor of his father nationally and internationally. How real is this succession, and will the DPRK open up under his regime? 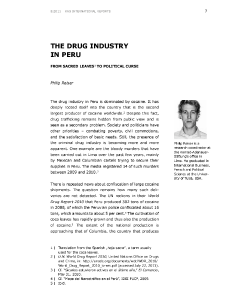 The Drug Industry in Peru

From the Holy Leaves to a Political Curse

The drug industry in Peru is dominated by cocaine. It has deeply rooted itself into the country that is the second largest producer of cocaine worldwide. Despite this fact, drug trafficking remains hidden from public view and is seen as a secondary problem. 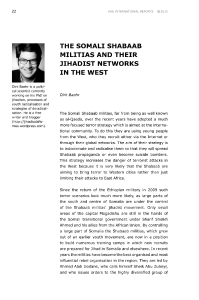 The Somali Shabaab Militias and Their Jihadist Networks in the West

The Somali Shabaab militias over the recent years have adopted a much more focused terror strategy which is aimed at the international community. To do this they are using young people from the West, who they recruit either via the Internet or through their global networks. The aim of their strategy is to indoctrinate and radicalise them so that they will spread Shabaab propaganda or even become suicide bombers. This strategy increases the danger of terrorist attacks in the West. Dirk Baehr