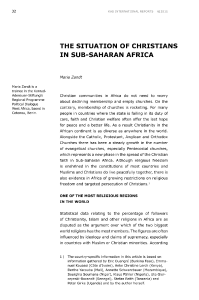 The Situation of Christians in Sub-Saharan Africa

Christian communities in Africa do not need to worry about declining membership and empty churches. On the contrary, membership of churches is rocketing. As a result Christianity in the African continent is as diverse as anywhere in the world. Although religious freedom is enshrined in the constitutions of most countries and Muslims and Christians do live peacefully together, there is also evidence in Africa of growing restrictions on religious freedom and targeted persecution of Christians. 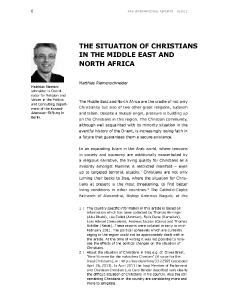 The Situation of Christians in the Middle East and North Africa

The Middle East and North Africa are the cradle of not only Christianity but also of two other great religions, Judaism and Islam. Despite a mutual origin, pressure is building up on the Christians in this region. The Christian community, although well acquainted with its minority situation in the eventful history of the Orient, is increasingly losing faith in a future that guarantees them a secure existence. 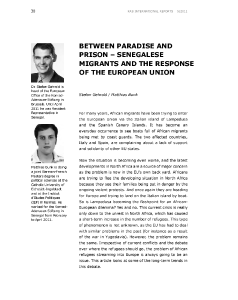 It has become an everyday occurrence to see boats full of African migrants being met by coast guards. The two affected countries, Italy and Spain, are asking other EU states to show their support by taking in some of these African refugees. In order to avoid uncontrolled and unsustainable migration to Europe and to promote the development of human resources in Africa, it is crucial to strengthen the European-African partnership. Senegal is playing a key role in this process. 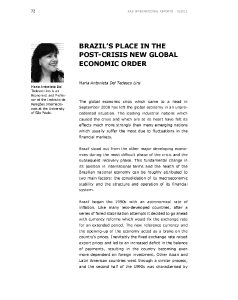 The global economic crisis which came to a head in September 2008 has left the global economy in an unprecedented situation. The leading industrial nations which caused the crisis and which are at its heart have felt its effects much more strongly than many emerging nations. Brazil is taking an increasingly important role in the discussions about a new global financial and monetary system. Its influence among developing countries is also likely to keep growing. 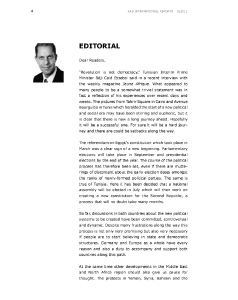 The pictures from Tahrir Square in Cairo and Avenue Bourguiba in Tunis which heralded the start of a new political and social era may have been stirring and euphoric, but it is clear that there is now a long journey ahead. Hopefully it will be a successful one. For sure it will be a hard journey and there are could be setbacks along the way. Germany and Europe as a whole have every reason and also a duty to accompany and support both countries along this path. 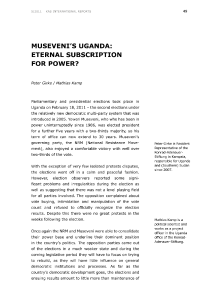 Parliamentary and presidential elections took place in Uganda in February – the second elections under the relatively new democratic system. Yoweri Museveni, who has been in power since 1986, was re-elected president with a two-thirds majority, so his term of office can now extend to 30 years. By and large the elections went off in a peaceful fashion. The initial reaction of the opposition parties was to blame the ruling party’s manipulation of the voting for their poor showing. 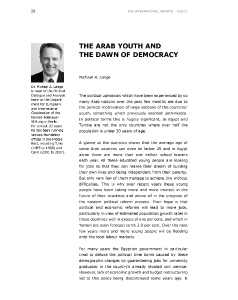 The Arab Youth and the Dawn of Democracy

The political upheavals which have been experienced by so many Arab nations over the past few months are due to the political mobilisation of large sections of the countries’ youth. In political terms this is hugely significant, as Egypt and Tunisia are not the only countries where over half the population is under 30 years of age. Most of the youthful demonstrators clearly came from the ranks of the middle classes, who had been suffering from the effects of the financial crisis. 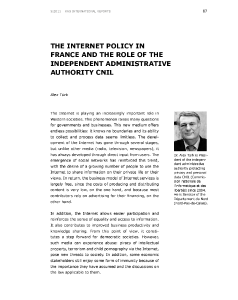 The Internet is playing an increasingly important role in Western societies and it raises many questions for governments and businesses. The specific action of the State for the establishment of more or less developed mechanisms for monitoring the internet must be conducted with respect for the privacy of individuals. On all these issues, the CNIL-Commission is leading the effort for the development of the Internet with respect for the rights and freedoms of individuals. 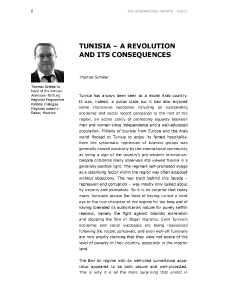 Tunisia – A Revolution and its Consequences

On January 14, 2011 the Tunisians won a great victory. Within just four weeks the desire for freedom, democracy and dignity succeeded in toppling a dictator from his pedestal. Many people in other countries have followed the events in Tunisia with interest, sympathy and even excitement. Tunisia’s revolution has started a wave of change across the whole Arab world. Furthermore, the changes in Tunisia have opened the door to new opportunities to strengthen Euro-Mediterranean relations. 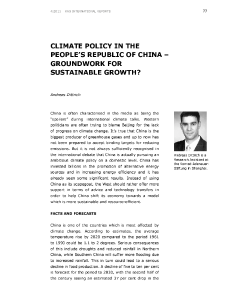 China is often characterised as being the “spoilers“ during international climate talks because it has not been prepared to accept binding targets for reducing emissions. But it is not always sufficiently recognised that China is actually pursuing an ambitious climate policy on a domestic level and that it has already seen some significant results. The West should offer more support in terms of advice and technology transfers in order to help China shift its economy towards a more sustainable model.