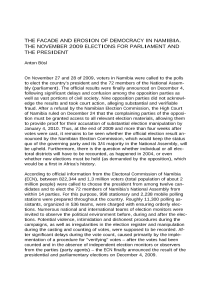 The Facade and Erosion of Democracy in Namibia

The November 2009 Elections for Parliament and the President

On November 27 and 28 of 2009, voters in Namibia were called to the polls to elect the country’s president and the 72 members of the National Assem-bly (parliament). The official results were finally announced on December 4, following significant delays and confusion among the opposition parties as well as vast portions of civil society. 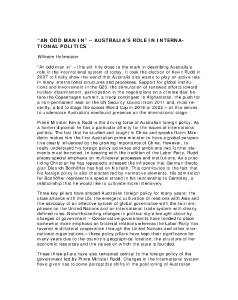 ”An Odd Man in” – Australia’s Role in International Politics

”An odd man in” – this still hits close to the mark in describing Australia’s role in the international system of today. It took the election of Kevin Rudd in 2007 to finally show the world that Australia also wants to play an active role in many international structures and processes. 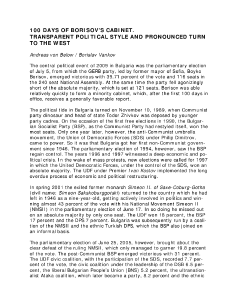 Transparent Political Style and Pronounced Turn to the West

The central political event of 2009 in Bulgaria was the parliamentary election of July 5, from which the GERB party, led by former mayor of Sofia, Boyko Borisov, emerged victorious with 39.71 percent of the vote and 116 seats in the 240 seat National Assembly. At the same time the party fell agonizingly short of the absolute majority, which is set at 121 seats. Borisov was able relatively quickly to form a minority cabinet, which, after the first 100 days in office, receives a generally favorable report. 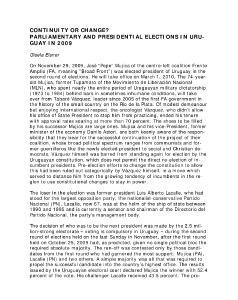 Parliamentary and Presidential Elections in Uruguay in 2009

On November 29, 2009, José ”Pepe” Mujica of the centre-left coalition Frente Amplio (FA, meaning ”Broad Front”) was elected president of Uruguay in the second round of elections. He will take office on March 1, 2010. The 74-year-old Mujica, former Tupamaro of the Movimiento de Liberación Nacional (MLN), who spent nearly the entire period of Uruguayan military dictatorship (1973 to 1984) behind bars in sometimes inhumane conditions, will take over from Tabaré Vázquez, leader since 2005 of the first FA government in the history of the small country on the Río de la Plata. 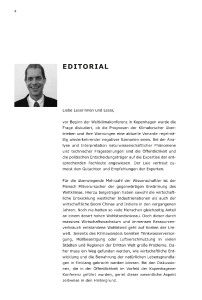 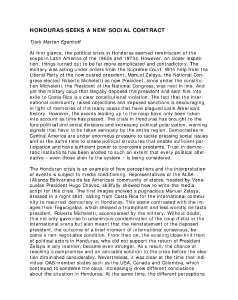 At first glance, the political crisis in Honduras seemed reminiscent of the coups in Latin America of the 1960s and 1970s. However, on closer inspection, things turned out to be far more complicated and contradictory. The military was acting under orders from the Supreme Court. With help from the Liberal Party of the now ousted president, Manuel Zelaya, the National Congress elected Roberto Micheletti as new President, since under the constitution Micheletti, the President of the National Congress, was next in line. 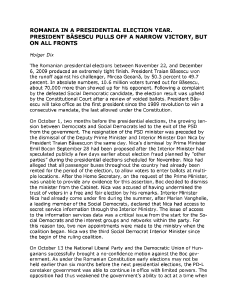 Romania in a Presidential Election Year

President Băsescu Pulls Off a Narrow Victory, but on All Fronts

The Romanian presidential elections between November 22, and December 6, 2009 produced an extremely tight finish. President Traian Băsescu won the runoff against his challenger, Mircea Geoană, by 50.3 percent to 49.7 percent. In absolute numbers, 10.6 million voters turned out for Băsescu, about 70,000 more than showed up for his opponent. Following a complaint by the defeated Social Democratic candidate, the election result was upheld by the Constitutional Court after a review of voided ballots. 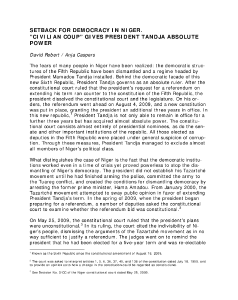 Setback for Democracy in Niger 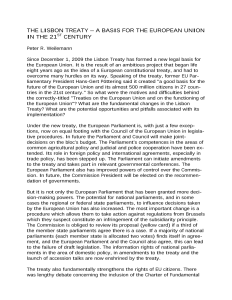 A Basis for the European Union in the 21st Century

Since December 1, 2009 the Lisbon Treaty has formed a new legal basis for the European Union. It is the result of an ambitious project that began life eight years ago as the idea of an European constitutional treaty, and had to overcome many hurdles on its way. 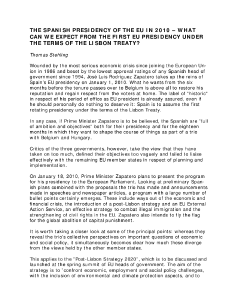 The Spanish Presidency of the EU in 2010

What Can We Expect from the First EU Presidency Under the Terms of the Lisbon Treaty?

Wounded by the most serious economic crisis since joining the European Union in 1986 and beset by the lowest approval ratings of any Spanish head of government since 1994, José Luis Rodriguez Zapatero takes up the reins of Spain’s EU presidency on January 1, 2010. What he wants from the six months before the tenure passes over to Belgium is above all to restore his reputation and regain respect from the voters at home.