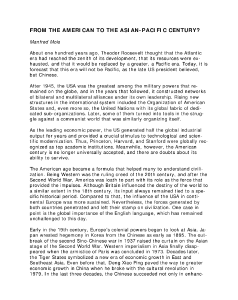 From the American to the Asian-Pacific Century?

About one hundred years ago, Theodor Roosevelt thought that the Atlantic era had reached the zenith of its development, that its resources were exhausted, and that it would be replaced by a greater, a Pacific era. Today, it is forecast that this era will not be Pacific, as the late US president believed, but Chinese. 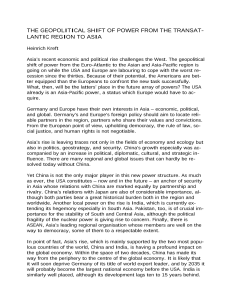 The Geopolitical Shift of Power from the Transatlantic Region to Asia

Asia’s recent economic and political rise challenges the West. The geopolitical shift of power from the Euro-Atlantic to the Asian and Asia-Pacific region is going on while the USA and Europe are labouring to cope with the worst recession since the thirties. Because of their potential, the Americans are better equipped than the Europeans to confront the new task successfully. What, then, will be the latters’ place in the future array of powers? The USA already is an Asia-Pacific power, a status which Europe would have to acquire. 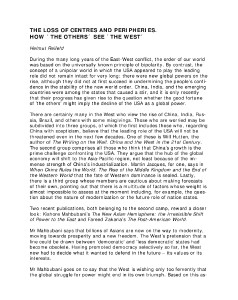 The Lost of Centres and Peripheries. How ’the Others’ see ’the West’

During the many long years of the East-West conflict, the order of our world was based on the universally known principle of bipolarity. By contrast, the concept of a unipolar world in which the USA appeared to play the leading role did not remain intact for very long: there were new global powers on the rise, although they did not at first succeed in undermining the people’s confidence in the stability of the new world order. 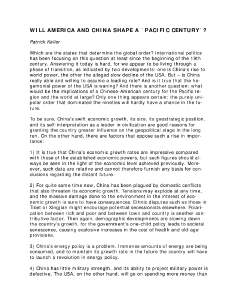 Will America and China Shape a ’Pacific Century’?

Which are the states that determine the global order? International politics has been focusing on this question at least since the beginning of the 19th century. Answering it today is hard, for we appear to be living through a phase of transition, as indicated by two developments: one is China’s rise to world power, the other the alleged slow decline of the USA. But – is China really able and willing to assume a leading role? And is it true that the hegemonial power of the USA is waning? 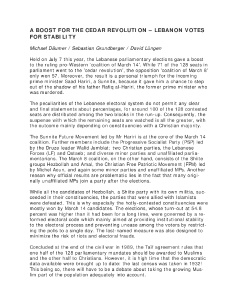 A Boost for the Cedar Revolution – Lebanon Votes for Stability

Held on July 7 this year, the Lebanese parliamentary elections gave a boost to the ruling pro-Western ’coalition of March 14’. While 71 of the 128 seats in parliament went to the ’cedar revolution’, the opposition ’coalition of March 8’ only won 57. Moreover, the result is a personal triumph for the incoming prime minister Saad Hariri, a Sunnite, because it gave him a chance to step out of the shadow of his father Rafiq al-Hariri, the former prime minister who was murdered. 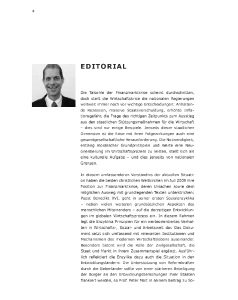 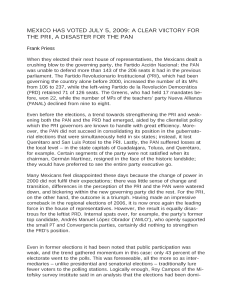 A Clear Victory for the PRI - A Disaster for the PAN

When they elected their next house of representatives, the Mexicans dealt a crushing blow to the governing party, the Partido Acción Nacional: the PAN was unable to defend more than 143 of the 206 seats it had in the previous parliament. The Partido Revolucionario Institucional (PRI), which had been governing the country alone before 2000, increased the number of its MPs from 106 to 237, while the left-wing Partido de la Revolución Democrática (PRD) retained 71 of 126 seats. The Greens, who had held 17 mandates before, won 22. 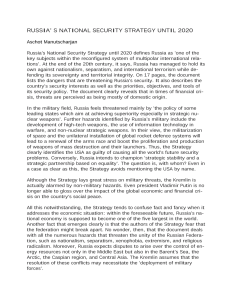 Russia’s National Security Strategy until 2020 defines Russia as ’one of the key subjects within the reconfigured system of multipolar international relations’. At the end of the 20th century, it says, Russia has managed to hold its own against nationalism, separatism, and international terrorism while defending its sovereignty and territorial integrity. On 17 pages, the document lists the dangers that are threatening Russia’s security. It also describes the country’s security interests as well as the priorities, objectives, and tools of its security policy. 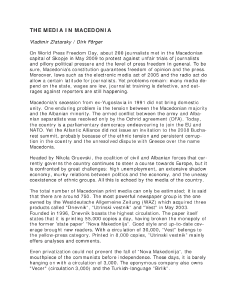 The Media in Macedonia

On World Press Freedom Day, about 200 journalists met in the Macedonian capital of Skopje in May 2009 to protest against unfair trials of journalists and pillory political pressure and the level of press freedom in general. To be sure, Macedonia’s constitution guarantees freedom of opinion and the press. Moreover, laws such as the electronic media act of 2005 and the radio act do allow a certain latitude for journalists. Yet problems remain: many media depend on the state, wages are low, journalist training is defective, and outrages against reporters are still happening. 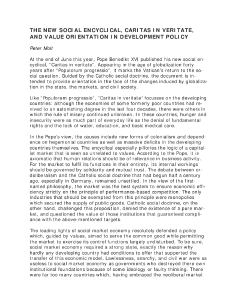 The New Social Encyclical, ”Caritas in Veritate”, and Value Orientation in Development Policy

At the end of June this year, Pope Benedikt XVI published his new social encyclical, ”Caritas in veritate”. Appearing in the age of globalization forty years after ”Populorum progressio”, it marks the Vatican’s return to the social question. Guided by the Catholic social doctrine, the document is intended to provide orientation in the face of the changes induced by globalization in the state, the markets, and civil society.