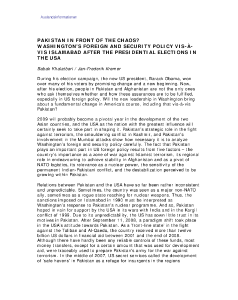 Pakistan in front of the Chaos?

During his election campaign, the new US president, Barack Obama, won over many of his voters by promising change and a new beginning. Now, after his election, people in Pakistan and Afghanistan are not the only ones who ask themselves whether and how these assurances are to be fulfilled, especially in US foreign policy. Will the new leadership in Washington bring about a fundamental change in America’s course, including that vis-à-vis Pakistan? 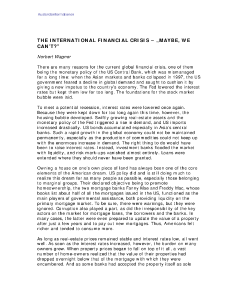 There are many reasons for the current global financial crisis, one of them being the monetary policy of the US Central Bank, which was mismanaged for a long time: when the Asian markets and banks collapsed in 1997, the US government feared a decline in global demand and sought to cushion it by giving a new impetus to the country’s economy. The Fed lowered the interest rates but kept them low for too long. The foundations for the stock market bubble were laid. 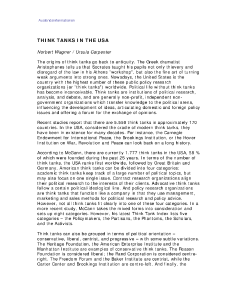 Think Tanks in the USA

The origins of think tanks go back to antiquity. The Greek dramatist Aristophanes tells us that Socrates taught his pupils not only thievery and disregard of the law in his Athens ”workshop”, but also the fine art of turning weak arguments into strong ones. Nowadays, the United States is the country with the highest number of these public policy research organizations (or ”think tanks”) worldwide. 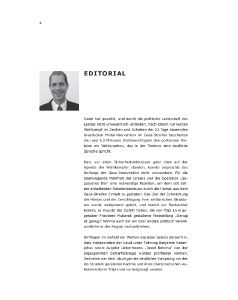 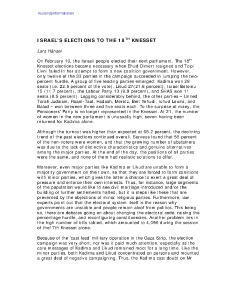 Israel's Elections to the 18th Knesset

On February 10, the Israeli people elected their next parliament. The 18th Knesset elections became necessary when Ehud Olmert resigned and Tzipi Livni failed in her attempt to form a new coalition government. However, only twelve of the 33 parties in the campaign succeeded in jumping the two-percent hurdle. 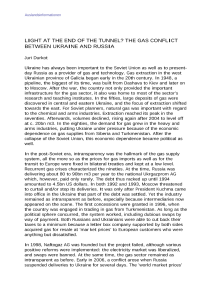 Light at the End of the Tunnel?

The Gas Conflict Between Ukraine and Russia

Ukraine has always been important to the Soviet Union as well as to presentday Russia as a provider of gas and technology. 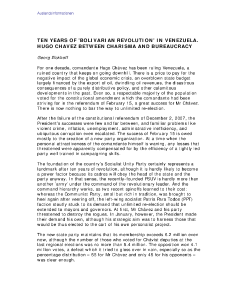 Hugo Chávez Between Charisma and Bureaucracy

For one decade, comandante Hugo Chávez has been ruling Venezuela, a ruined country that keeps on going downhill. There is a price to pay for the negative impact of the global economic crisis, an overblown state budget largely financed by the export of oil, dwindling oil revenues, the disastrous consequences of a purely distributive policy, and other calamitous developments in the past. 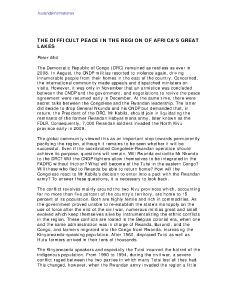 The Difficult Peace in the Region of Africa's Great Lakes

The Democratic Republic of Congo (DRC) remained as restless as ever in 2008. In August, the CNDP militias resorted to violence again, driving innumerable people from their homes in the east of the country. 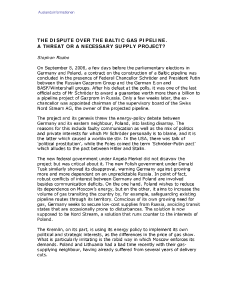 The Dispute Over the Baltic Gas Pipeline.

A Threat or a Necessary Supply Project?

On September 8, 2008, a few days before the parliamentary elections in Germany and Poland, a contract on the construction of a Baltic pipeline was concluded in the presence of Federal Chancellor Schröder and President Putin between the Russian Gazprom Group and the German E.on and BASF/Wintershall groups. 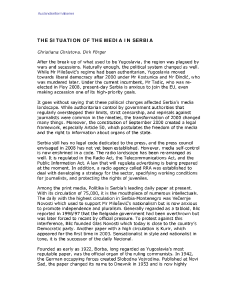 The Situation of the Media in Serbia

It goes without saying that these political changes affected Serbia’s medialandscape. While authoritarian control by government authorities thatregularly overstepped their limits, strict censorship, and reprisals againstjournalists were common in the nineties, the transformation of 2000 changedmany things.