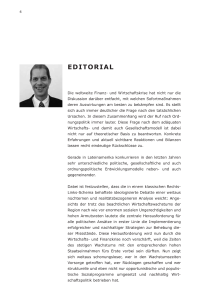 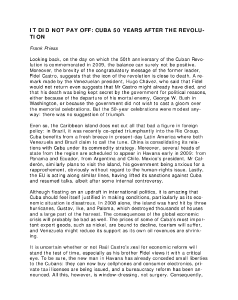 It Did not Pay off - Cuba 50 Years after the Revolution

Looking back, on the day on which the 50th anniversary of the Cuban Revolution is commemorated in 2009, the balance can surely not be positive. Moreover, the brevity of the congratulatory message of the former leader, Fidel Castro, suggests that the icon of the revolution is close to death. 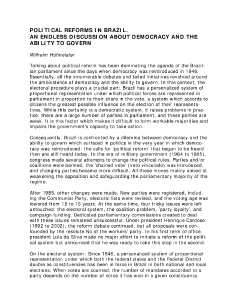 Talking about political reform has been dominating the agenda of the Brazilian parliament since the days when democracy was reintroduced in 1946. Essentially, all the innumerable debates and failed initiatives revolved around the ambivalence of democracy and the ability to govern. 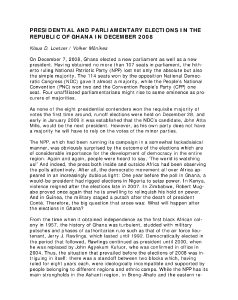 On December 7, 2008, Ghana elected a new parliament as well as a new president. Having obtained no more than 107 seats in parliament, the hitherto ruling National Patriotic Party (NPP) lost not only the absolute but also the simple majority. The 114 seats won by the opposition National Democratic Congress (NDC) gave it almost a majority, while the People’s National Convention (PNC) won two and the Convention People’s Party (CPP) one seat. 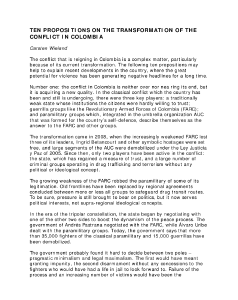 Ten Propositions on the Transformation of the Conflict in Colombia

The conflict that is reigning in Colombia is a complex matter, particularly because of its current transformation. The following ten propositions may help to explain recent developments in the country, where the great potential for violence has been generating negative headlines for a long time. 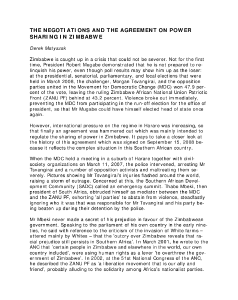 The Negotiations and the Agreement on Power Sharing in Zimbabwe

Zimbabwe is caught up in a crisis that could not be severer. Not for the first time, President Robert Mugabe demonstrated that he is not prepared to relinquish his power, even though poll results may show him up as the loser: at the presidential, senatorial, parliamentary, and local elections that were held in March 2008, the challenger, Morgan Tsvangirai, and the opposition parties united in the Movement for Democratic Change (MDC) won 47.9 percent of the vote, leaving the ruling Zimbabwe African National Union Patriotic Front (ZANU PF) behind at 43.2 percent. 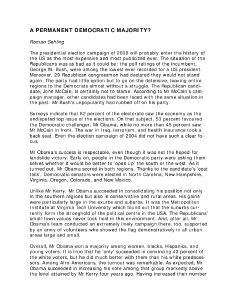 The presidential election campaign of 2008 will probably enter the history of the US as the most expensive and most publicized ever. The situation of the Republicans was as bad as it could be: the poll ratings of the incumbent, George W. Bush, were among the lowest ever recorded for a US president. 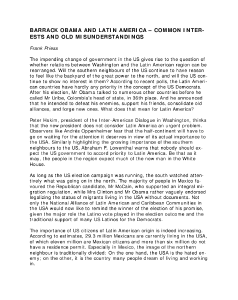 The impending change of government in the US gives rise to the question of whether relations between Washington and the Latin American region can be rearranged. Will the southern neighbours of the US continue to have reason to feel like the backyard of the great power to the north, and will the US continue to show no interest in them? According to recent polls, the Latin American countries have hardly any priority in the concept of the US Democrats. After his election, Mr Obama talked to numerous other countries before he called Mr Uribe, Colombia’s head of state, in 36th place. And he announced that he intended to defeat his enemies, support his friends, consolidate old alliances, and forge new ones. What does that mean for Latin America? 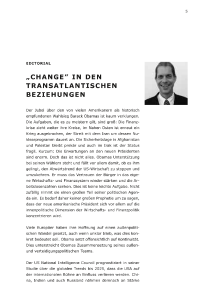 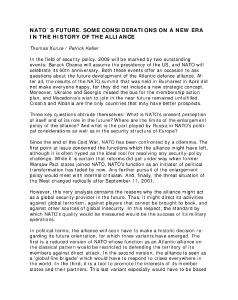 NATO's Future. Some Considerations on a New Era in the History of the Alliance

In the field of security policy, 2009 will be marked by two outstanding events: Barack Obama will assume the presidency of the US, and NATO will celebrate its 60th anniversary. Both these events offer an occasion to ask questions about the future development of the Atlantic defence alliance. After all, the results of the NATO summit that was held in Bucharest in April did not make everyone happy, for they did not include a new strategic concept.