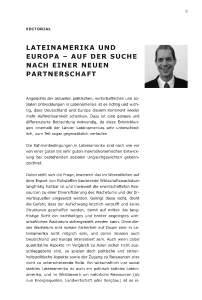 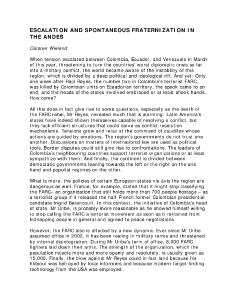 Escalation and Spontaneous Fraternization in the Andes

When tension escalated between Colombia, Ecuador, and Venezuela in March of this year, threatening to turn the countries’ worst diplomatic crisis so far into a military conflict, the world became aware of the instability of this region, which is divided by a deep political and ideological rift. And yet: Only one week after Raúl Reyes, the number two in Colombia’s terrorist FARC, was killed by Colombian units on Ecuadorian territory, the spook came to an end, and the heads of the states involved embraced or at least shook hands. 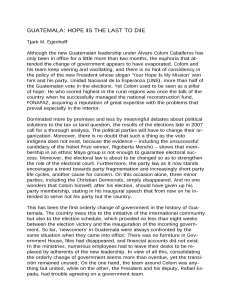 Guatemala: Hope is the last to die

Although the new Guatemalan leadership under Álvaro Colom Caballeros has only been in office for a little more than two months, the euphoria that attended the change of government appears to have evaporated. Colom and his team keep veering and vacillating, and there is no hint of consistency in the policy of the new President whose slogan ’Your Hope Is My Mission’ won him and his party, Unidad Nacional de la Esperanza (UNE), more than half of the Guatemalan vote in the elections. 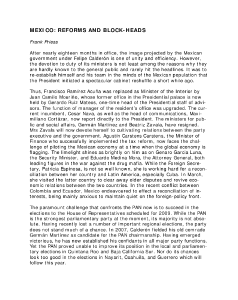 After nearly eighteen months in office, the image projected by the Mexican government under Felipe Calderón is one of unity and efficiency. However, the devotion to duty of its ministers is not least among the reasons why they are hardly known to the general public and rarely hit the headlines. It was to reestablish himself and his team in the minds of the Mexican population that the President initiated a spectacular cabinet reshuffle a short while ago. 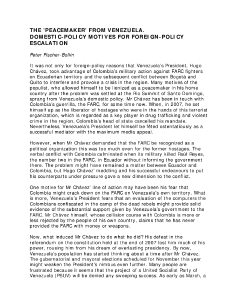 The Peacemaker from Venezuela

It was not only for foreign-policy reasons that Venezuela’s President, Hugo Chávez, took advantage of Colombia’s military action against FARC fighters on Ecuadorian territory and the subsequent conflict between Bogotá and Quito to interfere and provoke a crisis in the region. 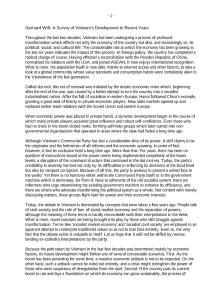 A Survey of Vietnam's Development in Recent Years

Throughout the last two decades, Vietnam has been undergoing a process of profound transformation which affects not only the economy of the country but also, and increasingly so, its political, social, and cultural life. The considerable rate at which the economy has been growing in the last six years indicates the impact of this process. In foreign policy, the country has completed a radical change of course: Having effected a reconciliation with the People's Republic of China, normalised its relations with the USA, and joined ASEAN, it now enjoys international recognition 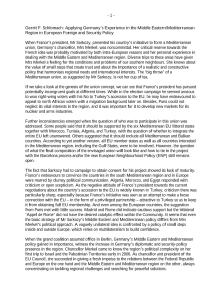 When France’s president, Mr Sarkozy, presented his country’s initiative to form a Mediterranean union, Germany’s chancellor, Mrs Merkel, was noncommittal. Her critical reserve towards the French idea was probably motivated by both intra-European reasons and her personal experience in dealing with the Middle Eastern and Mediterranean region. Diverse trips to these areas have given Mrs Merkel a feeling for the conditions and problems of our southern neighbours. 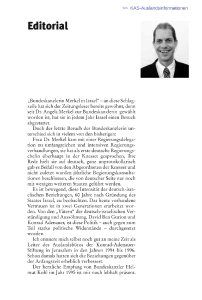 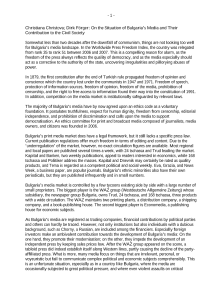 Somewhat less than two decades after the downfall of communism, things are not looking too well for Bulgaria’s media landscape. In the Worldwide Press Freedom Index, the country was relegated from rank 35 to rank 51 between 2006 and 2007. This is a compelling reason for alarm, as the freedom of the press always reflects the quality of democracy, and as the media especially should act as a corrective to the authority of the state, uncovering irregularities and pillorying abuses of power. 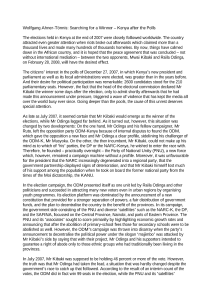 Searching for a Winner – Kenya after the Polls

The elections held in Kenya at the end of 2007 were closely followed worldwide. The country attracted even greater attention when riots broke out afterwards which claimed more than a thousand lives and made many hundreds of thousands homeless. By now, things have calmed down in the African country, and it is hoped that the peace agreement that was concluded – not without international mediation – between the two opponents, Mwai Kibaki and Raila Odinga, on February 28, 2008, will have the desired effect.