by Gerhard Wahlers
Political parties are a pillar of the democratic system. They assume central functions such as promoting citizen participation in political life and shaping public opinion. They have a major impact on our country’s political development and serve as an interface between state organs and the public. Parliamentary democracy is ultimately always party democracy.
December 1, 2020 4 Ordering Information

Developments under way in modern societies, such as increasing polarisation of political positions and the digitalisation of many areas of public and private life, present parties with enormous challenges﻿, which they must find creative ways of overcoming.

Digitalisation in particular offers opportunities: Parties today have a much wider variety of options for integrating people, disseminating information about their own positions, and appealing to potential voters. Social media has long been indispensable to electoral campaigns. But parties must continue to communicate with their voters on all channels. A good digital campaign is a prerequisite in every corner of the world. Yet, it by no means replaces traditional forms of campaigning﻿, such as classic canvassing, as Frank Priess notes in his article.

Technical developments are not the only force influencing politics. Societal change is also becoming visible in the party landscape in many places. New parties are being founded to challenge established ones. This is not a new phenomenon in itself, but, as Franziska Fislage shows in her description of the situation in Europe, the speed at which new parties are achieving success is. New parties ﻿benefit from developments that we have observed for quite some time: declining party loyalty, increasing voter volatility, and the ﻿fading of old political lines of conflict. New parties provide a feeling of being different – and their success is often fuelled by the decline of trust in political institutions.

The difficulty of building sustainable trust in the political system in the first place can be observed in Tunisia. Ten years after the revolution and the overthrow of dictator Ben Ali, the political mood there is sober, as Holger Dix writes. He identifies several trends that challenge fledgling democracies and mak﻿e it difficult for them to establish themselves. This includes growing scepticism towards democracy, political parties’ loss of importance as party system fragmentation advances, and political instability that manifests itself in frequent changes of government.

Parties in Latin America ﻿are also coping with loss of trust. ﻿The continent is experiencing increasing political polarisation, which charismatic populist leaders are capitalising on - despite the long traditions of many Latin American parties. China sees the weakness of Latin American parties as an opportunity to exert influence. Beijing is systematically expanding its relations to Latin American parties and harnessing its economic influence to drive partners into political and geostrategic dependency. Europe must not remain indifferent to this development, as Sebastian Grundberger notes. An especially good example of a party fighting to maintain its position can be observed in Mexico: The Partido Acción Nacional (PAN) has a long and varied history. Prior to the decisive 2021 elections, it enjoys the distinction of being the strongest opposition party and faces the challenge of renewing itself to a certain extent. It needs a convincing platform and must field politically experienced, credible candidates and forge strategic alliances, as Hans-Hartwig Blomeier and Ann-Kathrin Beck write.

Unlike Latin America, ﻿﻿sub-Saharan Africa is home to greatly fragmented party systems. The parties themselves are largely indistinguishable from one another in their platforms and only weakly anchored in society. They also often depend on a strong leader figure – not least for funding. However, in their article Benno Müchler and Christoph Schmidt warn against focusing solely on deficits. It is important to bear in mind the political players who do not engage in politics merely as a business to gain access to state resources for self-enrichment.

New parties, clientele parties, mainstream parties. Even though the situation varies greatly from place to place and deficits are frequent, it remains clear that the democratic process is secure only where there is some party variety and parties are free to act, have meaningful platforms, and can communicate and lead. That is why strengthening democracy always entails strengthening parties. 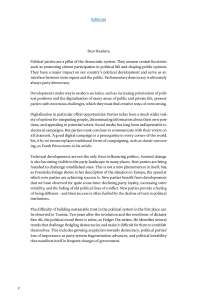