by Dr. Gerhard Wahlers
It has been now more than nine months since the Russian invasion of Ukraine radically changed the perceived threat for many people in Europe. In Germany, too, people have had to face up to questions of war and peace that seemed to be consigned to the past – many for the first time in their lives.
December 6, 2022 4 Ordering Information

How would we respond to an attack? Can we, as Germans, Europeans, and partners in the Western alliance, deal militarily with a now openly imperialist Russia? What if someone else were in the White House in this situation? Have we become too economically dependent on authoritarian states, and are we at risk of further adversity from China, too? Until recently, such problems were almost exclusively the domain of politicians and academics, but since February, they have become the focus of intense public debate. For many, these matters are no longer abstract but existential. Security experts are the new virologists.

In this issue of International Reports, we ask military historian Sönke Neitzel whether German society is prepared for conflict, and talk to him about unrealistic calls for peace. We also discuss the lack of debate about how war continues, unfortunately, to be used as a political means, but also how citizens may be more resilient than their government gives them credit for.

The German government, embodied by the Chancellor, took a well noted step shortly after Russia’s invasion of Ukraine by announcing a Zeitenwende in security policy, including a 100-billion-euro package for the Bundeswehr. This was certainly important, writes Philipp Dienstbier, but the project has a flaw: it is merely catching up on the investment that will enable Germany to finally deliver on the promises made to its Western allies following the annexation of Crimea eight years ago. Meanwhile, in June, NATO once again ramped up its expectations of its members – and Germany is at risk of breaking its recent pledges to defend the alliance yet again.

In turn, the credibility and effectiveness of this alliance is heavily dependent on the United States. Looking west across the Atlantic, there is currently an overall sense of relief at the Biden administration’s close coordination with European partners regarding the war in Ukraine, but this is tinged by concerns about what may lie in store after 2024. Don’t just look at Trump! This is the appeal of Paul Linnarz, whose article focuses on structural changes in the US electorate. Particularly among Republican voters, there is a growing desire to scale back their country’s international engagement. Accordingly, Europeans would be well advised to take their security more firmly into their own hands.

This is accentuated by the fact that the US has long viewed China as its main rival in the coming decades, and is shifting its attention from Europe to Asia. In his article, Johann Fuhrmann analyses what role the People’s Republic could play in relations with Western countries, and what lessons we can learn from the experience with Russia for our future relations with Beijing.

Economic ties with China have repeatedly been subject to critical examination. In economic terms, is Germany in the clutches of autocrats? In his article, Jan Cernicky weighs up the risks and benefits of a closely interwoven global economy and makes a clear appeal: as many restrictions as absolutely necessary, but as much free trade as possible.

Finally, Magdalena Jetschgo-Morcillo, Sebastian Enskat, and Maximilian Römer look at the role of democratic emerging countries in the debate about Russia’s war on Ukraine. They point out that states such as Brazil, India, and South Africa are not willing to interpret this conflict as a clash between democracy and autocracy, and to adopt a clear position. The authors urge Western countries to be more responsive to the specific needs and interests of these emerging nations rather than pressurising them to choose between “good” and “evil”.

The situation in Ukraine is changing from day to day, and it is hard to predict when and how the war will end. But the fundamental conflict between our free societies and an increasingly authoritarian Russia that is aggressive towards the outside world is likely to remain – as part of a wider confrontation between the countries that have established our existing liberal world order, and the revisionist powers that seek to tear it down. And although that confrontation is also a systemic conflict between democracies and authoritarian states, we have to ask ourselves whether we are wise to distinguish between opponents and allies based solely on this criterion. For in order to persist in this conflict, we must, on the one hand, strengthen our resilience and continue to defend our liberal values with confidence. But on the other hand, we will also have to win partners who may not yet be the perfect incarnation of these values. To have an honest debate on that fact and then act accordingly: that may well be the most important task Western foreign policy is facing today. 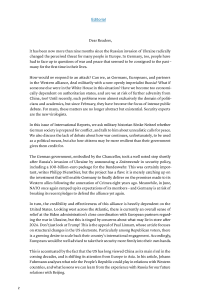