by Dr. Gerhard Wahlers
Will we work only a few hours a week one day because robots and algorithms do most of our work for us? How will digitalisation change our interactions, political decision-making processes, and geopolitical contexts? Prediction is very difficult, especially about the future. Nevertheless, the contributions to this issue do not limit themselves to the current state of digitalisation, but venture a look into the digital future.
April 16, 2018 1 Ordering Information

Will it be permanently dark in the factories of the future – because the autonomous machines working there do not need any light? Will we work only a few hours a week one day because robots and algorithms do most of our work for us? How will digitalisation change our interactions, political decision-making processes, and geopolitical contexts? Prediction is very difficult, especially about the future. Nevertheless, the contributions to this issue do not limit themselves to the current state of digitalisation, but venture a look into the digital future.

There is no doubt that digital progress will continue to change our lives, and especially the way we work. This prospect causes some to hope for a better balance between work and private life. Others fear that people will be replaced by machines and become unemployed. In his contribution to this issue, Aljoscha Burchardt explains what hopes are realistic and what fears are justified.

Going beyond unrealistic hopes and exaggerated fears, it is certain that as the use of artificial intelligence increases, it becomes more important to agree on binding rules for this usage. Olaf Groth, Mark Nitzberg, and Mark Esposito make this clear in their contribution and call for an international Magna Carta for the age of cognitive machines.

The Society 5.0 concept in Japan pursues the goal of a fully networked society. Its initiators hope to solve the urgent demographic and economic problems of the island state. Franz Waldenberger analyses the likelihood of success.

Nowhere is it more evident that digitalisation is changing political decision-making processes than in social media. The fact that anyone in the world can network and exchange ideas with anyone else has its downsides too, as Torben Stephan explains. The challenge for policymakers is to promote the positive elements of digital participation while containing the negative ones.

Using Kenya as an example, Jan Cernicky and Antonie Hutter show that digitalisation has the potential to contribute to increasing freedom and justice. In Kenya, with its dynamically growing digital economy, the young – and numerically superior – digital natives face a social and political elite for whom the internet is generally new territory. Whether the younger generation can use the internet as a space for open discourse, ensuring more participation, remains to be seen.

So far, the connections between digitalisation processes and both the international energy and raw material markets have tended to attract less attention than is warranted. The current epochal change in global energy systems is interacting with the digital revolution in many ways. In his contribution, Peter Hefele analyses the opportunities and risks of a digitised energy economy and shows what geopolitical power shifts might result.

Blockchain technology is already receiving a great deal of attention in connection with Bitcoin, the digital currency. In his contribution, Christian Hübner shows that its potential goes far beyond cryptocurrencies. It may even be an alternative to weak government institutions like those we find most commonly in emerging and developing countries.

No one can yet conclusively say whether dark factories will become a normality, people will disappear from production processes, or political decision-making processes will take place only digitally. However, even today, there can be no doubt that our future will unfold in digital space. Therefore, there is no way to avoid the necessity of making this space our own so that we can actively shape our digital future, with all its potential, in the way we want. 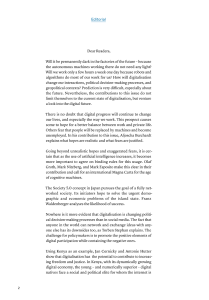