by Dr. Gerhard Wahlers
Some 30 years ago, Boutros Boutros-Ghali – who went on to become UN Secretary General – predicted that the wars of the future would be fought over water. His prediction has not yet come true, but when we look at the various regions of the world, it is clear water is becoming an increasingly scarce resource that is indeed at the centre of many conflicts – or is at least exacerbating them significantly.
October 18, 2017 3 Ordering Information

RM (Reuters, Bildnr. GM1DWFKRJXAA)
Cadets from a maritime college during a military parade in Manila 2007.

This is particularly true of the Middle East, one of the world’s most arid and unstable regions. The situation in the Gaza Strip is certainly dramatic, but unresolved water issues are also causing conflicts between Israelis and Palestinians in the West Bank, as Marc Frings and Johannes Lutz discuss in their contribution to this issue. The recent resurgence of the Israeli-Palestinian Joint Water Committee is a sign that both parties are prepared to take pragmatic action. Nevertheless, there is a risk of further destabilisation of the region if no mutually acceptable solution can be found to the water issue.

In Africa, conflicts could also intensify if the continent’s extremely scarce water supplies continue to be used so unsustainably. In his article, Daniel El-Noshokaty highlights the potential supraregional disaster that could threaten Africa's largest freshwater lake. The livelihoods of more than 30 million people depend on Lake Victoria, but water pollution, resource exploitation, and the region's dramatic population growth are all putting massive pressure on the lake's ecosystem. The countries concerned will have to significantly increase their national efforts and work together more closely if the risk of an acute water shortage is to becountered effectively.

In contrast to Africa, Latin America is one of the world’s water-richest regions. However, the distribution of water is extremely uneven, meaning the problem of water supply is largely a problem of distribution. Gunter Rieck Moncayo and Maximilian Wichert discuss how the struggle to find solutions revolves around the regulatory question of whether a publicly or privately owned body is the best way to guarantee a safe and equitable supply of drinking water. The authors conclude that an appropriate institutional framework and proportionate regulations are more important for a functioning water policy than whether a supplier is a private company or state-run.

The challenges in Southeast Asia are of a completely different nature. Here, water has become a major security issue. Rabea Brauer and Frederick Kliem use the example of the Mekong to illustrate how Chinese power plays lie at the heart of numerous conflicts. China has built many dams in the upper reaches of the river, and as a result can “turn off the tap” for countries that lie downstream. With this in mind, the authors stress how important it is for all countries bordering the Mekong, including China, to be involved in a regulated system for working together on water-related issues.

Overall, the articles on this issue’s key topic highlight the enormous potential for conflict inherent in the scarce yet vital resource that is water. At the same time, cross-border water resources open up numerous opportunities for countries to work together. These opportunities must be systematically expanded if we are to prevent future wars being waged over water. 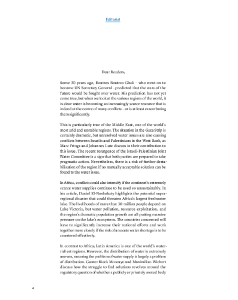