by Gerhard Wahlers
Democracy is not a matter of course, as a glance beyond our immediate horizon illustrates. To paraphrase Konrad Adenauer, democracy must be filled with life every day and, where necessary, defended vigorously, both internally and externally.
July 13, 2017 2 Ordering Information

RM (Reuters, Bildnr. RTXDS5O)
Confidence vote: Senator Tommaso Barbato is being removed from a session at the Italian Senate.

Democracy is not a matter of course, as a glance beyond our immediate horizon illustrates. To paraphrase Konrad Adenauer, democracy must be filled with life every day and, where necessary, defended vigorously, both internally and externally. 50 years after his death, this dictum by the first chancellor of the Federal Republic of Germany holds true now more than ever, as is shown by Christopher Walker in his article for this issue. He illustrates that for some time now, we have been witnessing how authoritarian regimes are attempting to increasingly expand their influence beyond their own borders. There is a need to take decisive and swift action to put an end to this “globalisation of authoritarianism”.

In his “Interjection”, Frank Priess also sees cause for concern in view of these developments. Nevertheless, he believes that one should not overlook the many positive developments made in advancing democracy and the rule of law that have taken place throughout the world since World War II, and he commends trying to take a differentiated view.

A look at Latin America illustrates the importance of strong civil societies for democratic structures to develop and persist; after a phase during which mainly socialist-style governments dominated the continent, the Western-liberal idea is once again on the rise. Kristin Wesemann and David Brähler describe how civil societies are putting pressure on their governments and the established political parties to allow them a greater say.

According to Edmund Ratka, authoritarian rulers will, in the long term, not be able to survive in the Arab world either. Instead, political fate will be determined by an increasingly networked younger generation seeking personal freedom and economic opportunities, partly as a natural result of demographic developments. However, Tunisia is the only country in which democratic change has so far flourished to some degree. Despite persisting corruption and an unstable security situation, the country continues to act as a “beacon of hope”, showing that there is a way to negotiate social conflicts in a peaceful manner and to balance power relationships through dialogue.

Watched closely by the international public, Myanmar too has been undergoing a process of opening up since 2010, reaching its preliminary peak at the end of 2015 with the first democratic elections since a quarter of a century. According to Norbert Eschborn, the governing party of Nobel Peace Prize Laureate Aung San Suu Kyi is, however, finding it difficult in practice to fulfil the high expectations for genuine democratic change among its own population and the international public.

The fact that a functioning democracy requires more than regular elections is not least illustrated by the situation on the African continent. Here, a number of aging long-time rulers exemplify the critical state of democracy. Many Sub-Saharan countries are characterised by a mixture of democratic and authoritarian tendencies. Mathias Kamp concludes that ultimately, the future of democracy in Africa will primarily be determined by the social developments in the respective countries – regardless of external support.

Particularly in places where suppression and despotism reign instead of freedom and democracy, there is a need for an instrument such as the International Criminal Court. As Franziska Rinke et al. show in their article, its operational capability remains limited although it has been 15 years since its founding as some major states have still not joined and others even intend to leave. However, political will is central to the success of the democratic idea, and consequently, the role that the court will be able to play in future will depend crucially on receiving support from strong member states.

Free elections, strong civil societies, mechanisms of peaceful conflict resolution and instruments for enforcing the principles of the rule of law – the articles on the key topic of this issue illustrate the diverse elements of liberal democracy. In addition, they remind us that we must not take achievements in this area for granted, but instead need to bring them to life afresh every day and defend them vigorously, both internally and externally and – to paraphrase Konrad Adenauer – make a conscious decision to choose freedom. 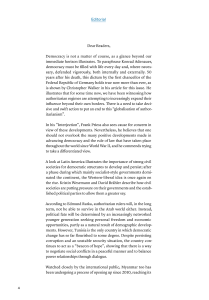