A girl walks over a muddy road.

The fight against climate change is not merely a question of ecological necessity but a question of economic reason. It is a question of generational equity, a question of compassion and a question of humanity and its future. These are the aspects Angela Merkel reminded her audience of when she addressed the 21st UN Climate Change Conference (COP21) at the end of 2015. Against this backdrop, the “Paris Agreement” has been welcomed by all sides, and rightly so. However, the reasons as to why this agreement came about pertain mainly to its non-binding and procedural character, as Jasper Eitze stresses in his article on the key topic of this issue. At the same time, he underscores Germany’s unique role and recommends giving due attention to the cost factor. It will be important to seek closer cooperation with its European and international partners.

In their article, Peter Hefele, Johannes Vogel and Eric Lee show that energy production, climate change and security are closely intertwined with one another, taking the Asia-Pacific Region as an example. They maintain that particularly with respect to the connection between climate change and migration, reliable identification of cause and effect is virtually impossible. This does not alter the fact that German development policy should make efforts to improve the capability of poorer sections of society in particular to adapt to climate change and thus mitigate climate migration. However, there is still a lack of suitable early warning systems whereby energy and climate-related sources of conflict could be identified in good time so that an appropriate response can be taken.

In his article on Latin America, Christian Hübner focuses on the security dimension of climate change. In this context, climate change exacerbates crises, for instance by increasing risks inherent in the power supply situation, fuelling conflicts about water and land as well as intensifying the urbanisation pressures, which are strong already – not to mention hurricanes, melting glaciers, droughts and flooding.

The African continent is gravely afflicted by climate change, as Oliver Ruppel and Arne Wulff show in their article. However, the situation is further exacerbated above all by the fact that many African countries are among the so-called fragile states. It is obvious that these countries are hardly in a position to mitigate the effects of climate change, let alone take effective measures to combat its causes. The remit of European Development Cooperation must entail supporting the affected countries in developing the necessary technical, human and above all political capabilities as to enable them to take part in the fight against climate change to begin with.

All six member states of the Gulf Cooperation Council continue to rank among the 15 largest CO2 emitters worldwide. However, as Gidon Windecker and Sebastian Pfülb explain in their article, there are now indications of a tentative shift towards renewable energy production. Concerns pertaining to energy security and economic prosperity in view of shrinking oil revenues constitute the motives behind that shift. Nonetheless, the change in attitude towards energy issues could also bring about structural changes in politics and society.

For Kazakhstan too, vast reserves of natural resources have not only been a blessing, but also a curse. In their article, Thomas Helm and Nicolas Scholz illustrate how falling prices on the international natural resource markets have caused the Kazakh economy to slide into crisis. The government, which had relied on the sale of fossil fuels and other natural resources for long, is now attempting to steer a new course, and looking mainly to renewable energies in doing so. If the transformation of the Kazakh economy into a modern industrial society is to be successful, the country will still need to rely on fossil fuel extraction for the time being as that is the only way to fund such an undertaking without risking social unrest and societal resistance.

All in all, the articles on the key topic of this issue primarily illustrate the complexity of the interaction between energy production, climate change phenomena and efforts to ensure security in different regions around the world. The fight against climate change is no doubt one of the main challenges of our time – a challenge which, to be overcome, will require consideration of questions of energy security and aspects of economic policy as well as, in particular, coordination within Europe and the transatlantic alliance. 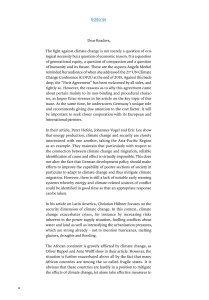