On May 7th and 8th, the Harry S. Truman Research Institute for the Advancement of Peace at Hebrew University and KAS Israel co-organized an expert workshop on “Energy in the EasternMed: Transcending Geography, Time, and Money”. Its purpose was to investigate the implications of recent offshore energy discoveries in the Eastern Mediterranean – discoveries which are widely recognized as a game-changer, in both the global energy arena and in the geopolitics of the Middle East. 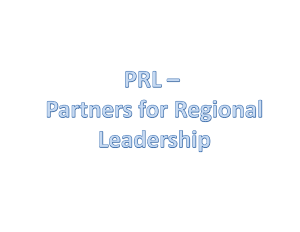 From Power Games to Participation

A Partners for Regional Leadership Project

From May 1-3, 2014, Palestinian, Jordanian and Israeli high school students came together with their teachers to participate in a workshop on non-violent communication at the Newe Shalom kibbutz in the center of Israel. 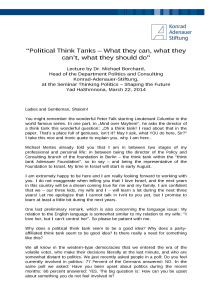 On April 9, 2014, KAS Israel, the Geneva Initiative and the S. Daniel Abraham Center for Strategic Dialogue at the Netanya Academic College jointly hosted a conference on the key questions of the current peace talks and the regional implications of the establishment of a Palestinian state. More than 230 participants followed the two top-class panel discussions. The demand made by the Netanyahu government – that the Palestinians had to explicitly acknowledge Israel as a Jewish state – played a significant role in the course of the conference. 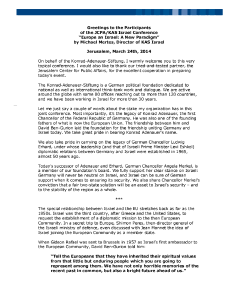 Is the EU an enemy of Israel?

On March 24, 2014, KAS Israel and the conservative Jerusalem Center for Public Affairs (JCPA) jointly organized an all-day symposium on “Europe and Israel: A New Paradigm”. The symposium revealed considerable prejudices and a lack of information that parts of the right side of the political spectrum in Israel bear towards the EU, such as the misperception that the EU is hostile against Israel and driven by anti-Semitic sentiments. 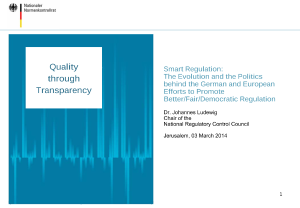 The Evolution and the Politics behind the German and European Efforts to Promote Better, Fair and Democratic Regulation

On 3 March 2014, Dr. Johannes Ludewig, Chairman of the German National Regulatory Control Council (NKR) at the Federal Chancellor's Office in Berlin and Member of the EU High Level Group on Administrative Burdens, gave a lecture on “Smart Regulation” at the Hebrew University of Jerusalem – a subject on which he had held discussions with representatives of the Israeli parliament and the legal service of the Knesset earlier on the same day.

Areas of Limited Statehood, Non-State Armed Groups and the Transformation of the Middle East

Israel is increasingly surrounded by areas of limited statehood where, to varying degrees, central authorities compete for security, as well as political, economic, and ideational power with a range of armed non-state governors. This was the key issued addressed by a workshop jointly organized by the International Institute for Counterterrorism (ICT) and KAS Israel. The workshop was held at the IDC Herzliya campus, starting with a public lecture event on the evening of the 11th of February 2014, and continuing in a round-table discussion for the next two days. 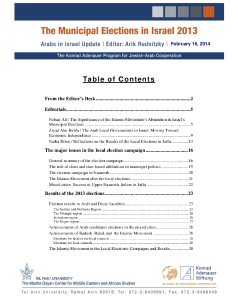 A special issue in the “Arabs in Israel Update” series

This issue is published by the Konrad Adenauer Program for Jewish-Arab Cooperation at the Moshe Dayan Center for Middle Eastern and African Studies, Tel Aviv University. It summarizes the results of the municipal elections in Israel’s Arab and Druze towns held on October and November 2013.