in partnership with the Israel Democracy Insitute

Great Power Competition in the Mediterranean

The Konrad-Adenauer-Stiftung Israel and the Maritime Policy & Strategy Research Center, University of Haifa cordially invite you to attend a Zoom panel with

Contending with Relics of an Offensive Past: Between Presentism and Preservation

The Konrad-Adenauer-Stiftung Israel and The Israel Council on Foreign Relations, cordially invite you to attend a Zoom conversation

From Storytelling to Activism

On February 24-25th the Konrad-Adenauer-Stiftung in Israel held a two-day seminar. More than fifty Palestinian and Israeli high-school students participated in it. The seminar aimed to enable the students to emerge from their personal and national narratives in order to find a common ground between the two peoples and eventually to become more active in their communities. 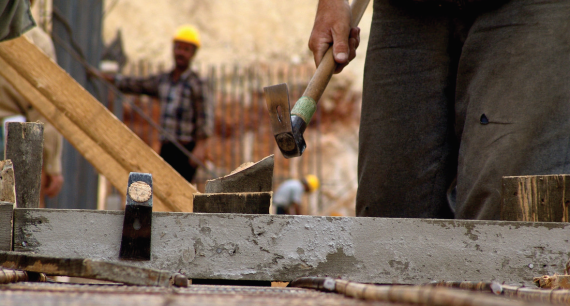 Left behind or Poor by choice?

The Working and the Poor Conference

Together with the Economics and Society Program at the Van Leer Institute, The Konrad Adenauer Stiftung hosted a conference on the "Working Poor". This growing phenomenon was discussed in the conference in depth from varying and contradicting perspectives. Possible solutions were presented by experts in the field and decision makers, including our keynote speaker Prof. Ronnie Schöb from the Freie Universität Berlin. While no clear cut answer was agreed upon, the conference brought up some very important issues regarding labor policy, education, wages and government responsibility. 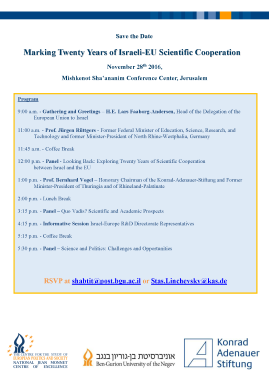 The Konrad-Adenauer-Stiftung in cooperation with The Center for the Study of European Politics and Society at the Ben-Gurion University of the Negev marked last November twenty successful years of Israeli-EU scientific cooperation in a special conference which was held at the Mishkenot Sha’ananim Conference Center in Jerusalem.

Reviewing the EU role in the Middle East

YOUTH COLLABORATION OF PEACE AND SUSTAINABILITY

On October 26th-28th the Konrad-Adenauer-Stiftung hosted in cooperation with the Eastern Mediterranean International School (EMIS) the yearly Youth Collaboration of Peace and Sustainability Conference (YOCOPAS). The conference took place in HaKfar HaYarok and ten Israeli and Palestinian schools participated in it. The goal was “to enhance peace and sustainability in the middle east through networking of local and international students and educators as an accelerator for change”.

Launch of the Kollek-Adenauer Program

The Konrad-Adenauer-Stiftung Israel launched on November 30th the joint Kollek-Adenauer-Program in cooperation with the Jerusalem Institute for Policy Research. The program intends to bring together experts of Jerusalem from different sectors such as academics, urban planners, municipality worker and representatives of local civil society to examine the viability of shared spheres for Jews and Arabs in the city.

KAS Israel organized a workshop discussing the implications of Article 6 of the Paris Climate Convention for international markets in general and Israel in particular. The meeting took place in the KAS Jerusalem office on the 26th of September. In the framework of the workshop Israeli and German experts discussed the following agenda items: The Evolution of Article 6 - Cooperative Approaches - Transfers of Mitigation Outcomes – Exchange of Carbon Units - Development of Standards and Guidelines - Accounting Rules - Carbon Pricing - Implications for Israel.

The Konrad-Adenauer-Stiftung Israel in cooperation with the Geneva Initiative hosted a seminar in Italy for young Palestinian and Israeli leaders and journalists to discuss the current situation of the Israeli-Palestinian conflict and its consequences. 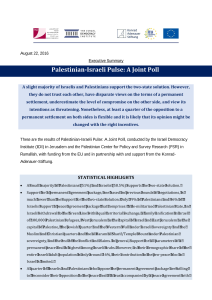 The Palestinian-Israeli Pulse: A Joint Poll

Only a small majority of Palestinians (51%) and Israelis (59%; 53% of Jewish Israelis and 87% of Arab Israelis) supports a two-state solution to the Israeli-Palestinian conflict.So reports the new Palestinian-Israeli Pulse: A Joint Poll, published today by the Israel Democracy Institute (IDI) in Jerusalem and the Palestinian Center for Policy and Survey Research (PSR) in Ramallah, with funding from the European Union (EU) and in partnership with and support from the Konrad-Adenauer Stiftung in Ramallah and Jerusalem.

On the occasion of the exhibition "From Stars to Persecuted - German-Jewish Football players in the Shadow of the Swastika" of Goethe Institut Israel, The Konrad Adenauer Stiftung hosted on July 5th in the First Station in Jerusalem a panel-discussion about "Football, Reconciliation and Peace - How can football bridge between peoples?