Launch of the Kollek-Adenauer Program

The Konrad-Adenauer-Stiftung Israel launched on November 30th the joint Kollek-Adenauer-Program in cooperation with the Jerusalem Institute for Policy Research. The program intends to bring together experts of Jerusalem from different sectors such as academics, urban planners, municipality worker and representatives of local civil society to examine the viability of shared spheres for Jews and Arabs in the city.
December 15, 2016 Ordering Information

The program will consist of about twenty experts and will meet for several sessions. Each of the meetings will be dedicated to another aspect of shared existence in Jerusalem, such as: Psychological elements of Jewish-Arab interaction, international comparison of Urban Planning in divided cities, Historical observation of Jewish-Arab relations in Jerusalem, the role of civil society, economical elements and labor market etc. The goal is to create a policy plan to strengthen and multiply functioning shared spheres in the city.

On November 30th the expert group met for the first session. The director of KAS-Israel, Dr. Michael Borchard has opened the meeting with greetings and mentioned the ambitious goal of the program but also emphasized the necessity of strengthening coexistence in Jerusalem as the most eminent problem we need to solve. After finished his word each member has introduced oneself and raised the most urgent issues for Jewish-Arab shared existence in Jerusalem; can we discuss shared existence in a city of extreme inequality in living standards, political rights and civil status between the two national groups? Can we promote shared spaces before solving the deep poverty and distress problems of East-Jerusalem? How to handle Jewish and Arab elements that reject, politically or religiously, any shared existence?

Nevertheless the main assumptions of the Kollek-Adenauer program were iterated. First, there are already in Jerusalem spaces of shared existence and the goal is to enable them to function positively. Second, the promotion of shared spaces can improve the relations between the different communities, reduce hostility, mistrust and fears and to increase the social and economic potential of the city. Third, promoting shared spaces is relevant whether the political status quo shall continue or there will a division of sovereignty in the city.

After the expert meeting the public event has begun. More than seventy guests came to hear the words of the renowned Jerusalemite author, A.B. Yehoshua. The evening started with the greetings of director manager of the Jerusalem Institute for Policy research, Mr. Lior Schillat. He thanked the partnership with the team of the Konrad-Adenauer-Stiftung and especially Dr. Michael Borchard as its director. According to Schillat there is almost no encounter between Jews and Arabs inside cities like Tel Aviv or Ramallah. On the contrary, in Jerusalem there is encounter of different populations and groups in hospitals, playgrounds, parks and schools. The Jerusalem Institute for Policy Research is not only engaged in such encounters but it also supports and promotes the exchange and relations between the Jewish and Arab residents of Jerusalem. With shared spheres in its city planning the city of Jerusalem can promote such exchange. Relations between Jews and Arabs take place from the bottom-up and joint interests can be the reason for encounter and exchange.

After Mr. Schillat praised Dr. Michael Borchard the project as an especially exceptional one. He spoke about his personal experience in his encounter between Christians, Jews and Muslims in Jerusalem. His children play together with Jews and Muslims in a football field and so an exchange of different groups takes place already in a young age. Moreover Mr. Borchard emphasized the similarities between the former mayor of Jerusalem, Teddy Kollek, and the first Chancellor of Germany, Konrad Adenauer. As before the latter became the German chancellor he was the lord mayor of the city of Cologne. Through the projects of the Kollek-Adenauer program, in form of discussions and workshops, KAS and JIPR follow the heritage of Kollek and Adenauer and contribute to a better coexistence of both peoples. Exactly right now as the Israeli-Palestinian peace process stagnates it is even more important to make progress in society levels. Dr. Borchard finished his speech with a quote of Konrad Adenauer: “When the others believe that one is at the end, only then it is time to start” and with this he called both the Israelis and the Palestinians not to give up their fight for a peaceful two-state Solution.

Next to come was Mr. Bastian Schroeder from the Konrad-Adenauer-Stiftung in the Palestinian Territories. In his speech Mr. Schroeder addressed the physical and mental separation between Israelis and Palestinians. According to his words, Jerusalem plays a special role as it considered to be one of the most controversial and contentious areas in this land. In order to avoid conflicts between Israelis and Palestinians opportunities of mutual exchange must be created. It is crucial however that these shared spaces will respect both groups equally and inclusively. Only this way mutual trust can be built. As a negative example mentioned Mr. Schroeder that construction of the light train in Jerusalem. The Palestinian side was not involved in its construction, what made it among them to a paramount political issue. For these reasons it is very difficult for the Arab residents of Jerusalem to look optimistically towards success of shared spheres. Still, Mr. Schroeder regards the project to be right and significant.

After the opening words the former director of the Jerusalem Institute for Policy Research, Ms. Ora Ahimeir, started the main part of the evening. Ms. Ahimeir spoke in her speech about how she almost forty years ago, together with the mayor Jerusalem then, Teddy Kollek, established the institute. Today she looks back proudly on the developments of the institute throughout these years. Back then the founders of the institute asked themselves how different people could live together in one city and how each one of them could become an equal part of it. The goal was to create a joint future for all. Therefore the founders oriented themselves towards comparable European cities to Jerusalem and how they overcame their conflicts. The ideology of the institute was and still is to create places of encounter and exchange, where people are equal, regardless their background.

A.B. Yehoshua was the last to give his key-note speech. The theme was Jerusalem as a laboratory for attainable Bi-Nationalism. The renowned author was critical towards the current situation of the peace process. Yehoshua stressed that since 1967 he was an advocate of the two-state solution but the recent developments had made doubt that such a solution is still viable. All the attempts to reach an agreement between Israel and the Palestinians have failed and nationalism in Israel is increasing in the last years. For these reasons A.B. Yehoshua does not adhere anymore to the two-state solution. Reality looks differently nowadays and therefore we must search after alternative solutions. For Yehoshua a binational state could be an option to promote peace between Israel and the Palestinians. However a binational state could function only with a successful coexistence and therefore shared spheres are of paramount significance in order to support the exchange between the different groups. Only full equal rights between the Jewish and Arab residents of Jerusalem can serve as a foundation for such a proposal. 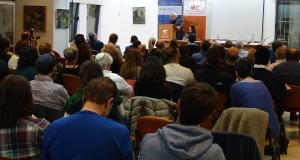 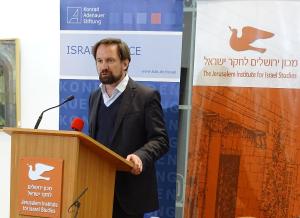 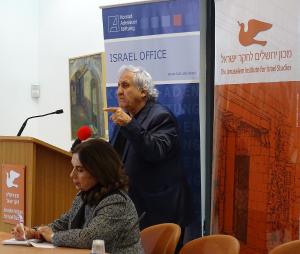