From July 13-19, 2013 the Konrad Adenauer Foundation and the American Jewish Committee hosted a joint study and dialogue seminar entitled “Israel at 65: Between domestic change and regional instability. The goal of the program was to bring together twelve young leaders from Germany and the U.S to create a deeper understanding of Israel and its neighbors for the transatlantic relations.
July 25, 2013 Ordering Information

The first leg of the program (July 13 to 15) was based in Tel Aviv, and the second part (July 15-19) was in Jerusalem with a half day in Ramallah. Upon their arrival in Jerusalem, participants were able to experience the city at a particular moment of religious observation: with the Muslims observing Ramadan,the month of fasting and Jews observing the fast day of Tisha B’av. On the evening of Tisha B’av, AJC/KAS participants witnessed first-hand the intensity of the Old City and the co-existence of Jews and Muslims within its walls. There, thousands of Jews prayed at the Western Wall for Tisha Ba’av while the evening also brought the celebratory breaking of the Ramadan fast in the Muslim quarter.

Saturday evening, former Kadima MK Yohanan Plesner highlighted the recent changes in Israel’s political system from the recent election and gave participants an insider’s perspective of the political culture in Israel. On Sunday, July 14, with the continued topic of Israel’s domestic reform agenda, television Journalist David Witzhum (Channel 1) gave a comprehensive introduction from the Israeli perspective in the morning. Participants then went to Jaffa, Tel Aviv’s ancient port city to visit the organization Physicians for Human Rights – Israel. At the open clinic, participants came to learn more about PHR-Israel and how they strive to promote a more fair and inclusive society in which the right to health is applied equally for all.

Participants returned to Tel Aviv for an afternoon session with Arik Rudnitzky, who is the director of the Konrad Adenauer Program for Jewish-Arab Cooperation at Tel Aviv University. Mr. Rudnitzky took the time to explain the situation in Israel of the Arab minority and the issues facing this group. In the evening, the German-American group met with Dr.Benedikt Haller, the German ambassador in Tel Aviv who discussed the development and current state of German-Israeli relations.

On July 15, 2013 Dr. Amichai Magen, a lecturer at the Lauder School of Government in Diplomacy and Strategy discussed if the Arab Spring could lead to an Islamic winter. His main point is that one interprets the dynamics of the Middle East as a crisis of statehood. The session was followed by meeting with Dr.Yossi Beilin, who was one of the architects of the Oslo Agreement and who shared his thoughts of the necessity and feasibility of a two-state solution.

In the afternoon, the seminar participants went south to the Israeli town of Sderot. There, they met with Captain Kobi Harush who explained the stressful situation residents of Sderot, a town that borders Gaza, have faced for many years. The participants returned to Jerusalem where they had a strategic tour of Jerusalem and to learn more about the unique political situation within area A,B, and C in the West Bank and between East and West Jerusalem.

On the morning of July 16, the AJC-KAS delegation went to Ramallah to gather another view on the Israeli-Palestinian Conflict.

Dr. Sami Adwan, Professor of Education at ' 'Bethlehem University,' 'presented the results of his Palestinian-Israeli-American community study. Asking the question “Are we victims of our own narratives?”. His presentation featured the Israeli and Palestinian Narratives of the conflict from how they are taught in schools.

Following Dr. Adwan’s intriguing presentation was Dr. Khalil Shikaki, the director of the Palestinian Center for Policy and Survey Research (PSR) and a longstanding partner of the Konrad-Adenauer-Stiftung. Dr. Shikaki presented the findings of a recent joint Palestinian-Israel poll reflecting the opinions the current potential for Peace Talks in the region. The poll found that while the majority of both sides still believed in a two-state solution, it also highlighted the scepticism of both populations that such a reality could exist in the next five years. It also reflected that while most Palestinians were in favour the return to the 1967 borders and a settlement freeze, most Israeli’s were still against these negotiating terms.

The visit to Ramallah was concluded with a discussion with Lucy Nusseibeh, who is the director of the Institute of Modern Media (IMM) at Al Quds University. Mrs. Nusseibeh spoke to the delegation about the role of women in Palestinian society and politics. She also touched upon the role of women in Israeli society in moderating and resolving conflict. Mrs. Nusseibeh spoke of the importance that women should be encouraged and empowered to articulate their roles publicly. She pointed out that Palestinian women traditionally have a stronger sense of self-confidence than in other Arab societies.

The next stop was Petah Tikwa, where participants went to meet with Ofra Strauss, CEO of the Strauss Group, which is one of the largest and most successful Israeli companies and also a company that extends its reach into the world market. Ofra Strauss not only is a business woman but also a philanthropist, spanning her influence in the world of Corporate Social Responsibility in Israel as well as serving as president of Jasmine,an NGO that supports Jewish and Arab women to create small businesses in Israel. The foundation “Jasmine,” emerged from a joint project of KAS Israel and the “Center for Jewish-Arab Economic development” and is a partner of KAS Israel.

Ofra Strauss spoke about the need for domestic reforms in Israel and described the many civil society initiatives in Israel as engines of social, economic and cultural innovation. A family business founded by Richard and Hilda Strauss from Rheinhessen Nieder-Olm in the 1930s, Strauss does not aspire for short term success but honors a corporate philosophy that is focused on sustainability.

Day 5: From Sorrow to Hope

The topic of the next day (Wednesday, July 15th) was called From Sorrow To Hope. Participants of the delegation spent most of the day at world research center for Holocaust research and museum:Yad Vashem. One of the trip’s main highlights and perhaps one of the most meaningful was the opportunity to speak in detail with two contemporary witnesses: Marta Weiss, a Auschwitz survivor, and Gabriel Bach, Deputy Prosecutor of the Eichmann trial in 1961 and former Israeli Supreme Court Judge. Finally, the participants learned about global holocaust education at the International School for Holocaust Studies. The impressionable day at Yad Vashem gave the participants much needed time for reflection together in the evening.

In the late afternoon, the participants visited the Knesset where they had the opportunity to join a guided tour, which included a brief stay in the visitor area of the plenary assembly room. The MKNachman Shai, now the co-chairman of the Israeli-German Parliamentary League of the Knesset, took the time to meet and discuss certain topics with the delegation such as the necessity of a two-state solution, commenting that this would be the only way to guarantee the continued existence of a Jewish and democratic state.

On Thursday, July 18th participants visited the Jerusalem office of the American Jewish Committee and met with the AJC Director of interreligious affairs, Rabbi David Rosen. Rabbi Rosen touched upon the relations between Jews, Muslims and Christians in Israel and discussed intra-Jewish pluralism particularly on the differences between the Orthodox and the ultra-Orthodox. He discussed how all three religions must learn to cope with the modern secular life and also how Jewish Orthodoxy must find ways to unite with loyalty and open- mindedness. He also commented that by intergrating the ultra-orthodox communities into mainstream life in Israel such as army service and into the labor market, the greater the chance they have to succeed as a community.

The acting dean of St. George’s Cathedral, Revd. Cannon Hosam Naoum also joined the discussion at the AJC on religion in Israel. Revd. Cannon Hosam Naoum spoke about the situation of the Christian minority in Israel and the fact that most of Europe is not even aware that there are Arab Christians native to the Holy Land. He also discussed how being an Arab-Christian is between the two mainstream populations (Jews and Muslims)which gives him a unique opportunity to serve as a bridge between Jews and Muslims.

The participants continued from these insightful meetings at the AJC to the Israel museum’s internationally acclaimed exhibition of Herod the Great and then continued with a visit to the excavated site of the Herodian which rounded out the day in understanding the historical and ancient foundation to the current hot topics that Jerusalem faces.

In the early evening, the group met with Ambassador Dr. Dore Gold, President of the Jerusalem Center for Public Affairs (JCPA. KAS Israel and the JCPA have been working together since the 1990s. Dr. Gold discussed with participants his experience as Israel’s ambassador to the United Nations and how easy it is to organize majorities against Israel in international organizations. Amongst other things, he discussed the Goldstone report and the weaknesses in the report which ultimately led to the retraction of the report from Goldstone himself but Israel suffered from irreparable damage the report caused internationally.

During the last morning of the tour, seminar participants and organizers took a moment to review and evaluate the program and their experience within the program. The goal of the program was that all participants from Germany and the United states received a deeper understanding of the importance of Israel and its neighbours for transatlantic relations. It was raised that more joint-reflection time would have been valued but the program generally received a positive evaluation. 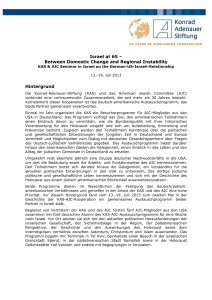