From Sarona to Salon Berlin

The Konrad-Adenauer-Stiftung in cooperation with The Centre for the Study of European Politics and Society organized a Study Day in Tel-Aviv for students of the Konrad Adenauer Division for European Studies. During the day the students learned about the history of Germans in Tel-Aviv Yaffo starting with a tour about the Templer settlers at the Sarona Colony, continuing with a lecture about German cuisine and finishing with a political briefing at the German Embassy.
June 5, 2016 Ordering Information

Our study day started with a two and a half informative tour in the former Templer colony of Sarona. Paule Kedem-Rakower, an expert on history, told the students about the fascinating and relatively unknown story of the German Templer settlement in Sarona. Besides learning about their unique role and contribution to the development of Tel Aviv, the students learned about their political and militaristic importance of Sarona during the first years of Israeli independence. The students learned that after the Templers were expelled from Palestine during the Second World War, the settlement became a British army base, and later, after the war of independence in 1948, it was transformed into a government and army complex of offices. The tour also allowed the students to understand the roots of the German Jewish immigration prior to Israel’s establishment and gave them a better understanding of the great mark the Germans have left in Tel Aviv in various fields and places.

Finally, following the lecture by Tom Franz, the students were hosted by the Embassy of the Federal Republic of Germany in Tel-Aviv and met with Ms. Monika Iwersen, Deputy Head of Mission at the Embassy.

At the Embassy, the students were first welcomed and briefed by the Dr. Michael Borchard, Head of the KAS office in Israel. Dr. Borchard spoke the vast activity of the Konrad-Adenauer Stiftung and about the long running cooperation with The Centre for the Study of European Politics and Society at the Ben Gurion University. Dr. Borchard told the students about importance that KAS sees in strengthening the ties between the Israel society and the European Union in future years, as we are expected to see more challenges ahead with the younger generation.

Following Dr. Borchard’s introduction, Ms. Iwersen gave the students an overview of the German institutions and organizations operating in Israel today in various fields. That way, the students got to learn about a wide range of activity, such as the political foundations, the cultural relations, the economic ties, the scientific and academic exchange programs and the volunteer organizations.

After Ms. Iwersen’s introduction, the students had the opportunity to ask questions and have an open discussion about different relevant topics regarding the Israeli-German-European relationship. Among the topics that were discussed were the German position regarding product labeling from Israeli settlements in the West Bank, the role of the political foundations in the eyes of the German public, the Holocaust education in Germany and much more. Overall, the discussion was very fruitful, honest and interesting, and touched upon different and personal perspectives that the students had to offer.

Finally, after a long and successful day, the study tour was concluded with a German style lunch in the local beer garden in Sarona, during which the student got to taste some of the German experience through the Bavarian kitchen. 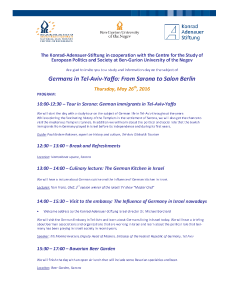 Germans in Tel-Aviv: From Sarona to Salon Berlin 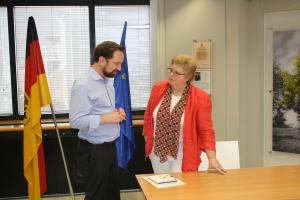 Dr. Michael Borchard the Konrad-Adenauer-Stiftung Israel director along with Ms. Monika Iwersen, Deputy Head of Mission, Embassy of the Federal Republic of Germany 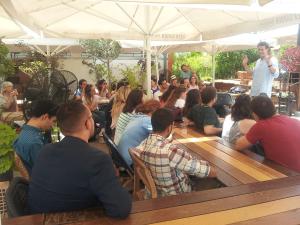 Lecture by Tom Franz about the Germnan Kitchen influence in Israel 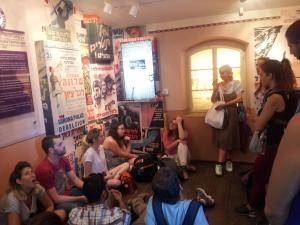 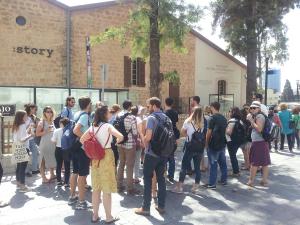 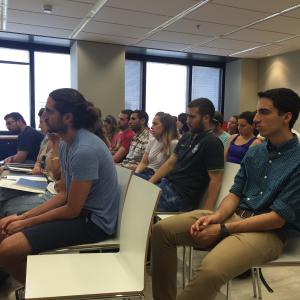 Ben Gurion students listening to the briefing of Ms. Iwersen