On the occasion of the exhibition "From Stars to Persecuted - German-Jewish Football players in the Shadow of the Swastika" of Goethe Institut Israel, The Konrad Adenauer Stiftung hosted on July 5th in the First Station in Jerusalem a panel-discussion about "Football, Reconciliation and Peace - How can football bridge between peoples?
July 6, 2016 Ordering Information

The event was introduced by Anna Jandrey, the deputy head of KAS Israel. In her opening words she emphasized the power of sport in general and football in particular. “In sport things like skin color and religious, cultural and ethnic background do not play a significant role. What matters are the physical abilities, the motivation and ambition”. Football brings people together and contributes to mutual understanding and to overcoming religious and cultural barriers. Finally Anna Jandrey has referred to the exhibition of Goethe Institute and to the football-cooperation between Germany and Israel.

Prof. Dr. Lorenz Peiffer (University of Hannover) had summarized the history of Jewish football players in Germany before and during Nazism. With his opening speech he led the discussion over to the panelists; Prof. Moshe Zimmermann (Hebrew University), the football player Walaa Hussein and Dvir Zivan from Peres Center for Peace. The moderator was the known Israeli journalist Tal Heinrich.

The participants of the panel have discussed whether football functions nowadays as a connecting or disconnecting element in society and in the Israeli-Palestinian conflict. Dvir Zivan alluded the successful youth activities of the Peres Center for Peace, which use football and sport in general to surmount differences and to bridge between Israelis and Palestinians. From the beginning the youth and children are motivated to work towards a common goal, to cooperate and to coalesce as an intercultural team.

Walaa Hussein which plays simultaneously in the Israeli female football league and in the Palestinian national team has pointed out that such initiatives, mostly for young Israeli and Palestinian women, are still very rare. In this relation, she referred to her own burdensome way, the lack of recognition and the danger of exclusion and racism in football. Nevertheless, according to Walaa Hussein, football can contribute to reconciliation as long as all players would be equally supported and respected.

This statement was supported by Prof. Moshe Zimmermann, which used current examples to show that football crosses national and transnational borders and can be understood as an element of cultural transfer. The discussion was finished with the realization that football can contribute to reconciliation and that the cooperation between Israelis and Palestinians on the sport levels must be more intensive. 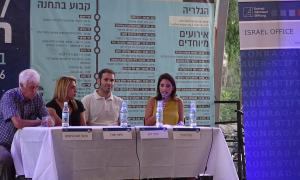 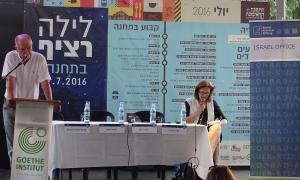