Gaza on the Edge

In collaboration with our partner EcoPeace, KAS Israel invited participants of the diplomatic community in Israel to learn about the trans boundary pollution of the Mediterranean Sea, the Wadi Hanoun and cross border pollution on land from Gaza to Israel.
October 26, 2017 Ordering Information 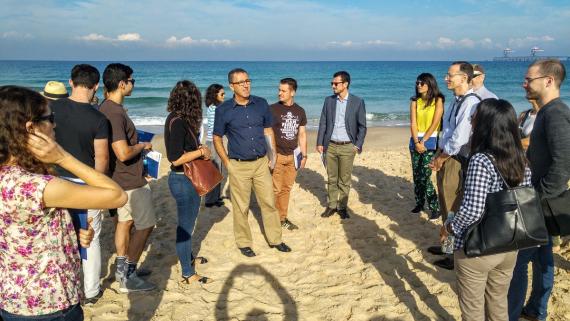 The Gaza Strip and the surrounding Israeli municipalities are located on the Coastal Aquifer, a major water resource for both sides. The Gaza Strip is currently facing a dire humanitarian crisis with potentially devastating implications for the local population and neighboring communities in Egypt and Israel. Around 97 % of the natural water extracted from the Coastal Aquifer – the main source of water in the Strip – has been declared unfit for human consumption by WHO standard, due to high salinity levels and contamination by nitrates caused by release of untreated sewage. Lack of clean water for domestic use and unsafe sanitary conditions pose a serious public health threat to the region.

Together with EcoPeace, KAS Israel brought the international community to these hotspots to discuss the challenges and posed very real solutions to make this issue a solvable one.

The first stop of the study tour was the Zikim beach, which lies between Gaza and the Israeli city of Ashdod. There, Gidon Bromberg, director of EcoPeace, introduced participants to the reality that while a conflict divides Israelis and Palestinians, our Ecosystem has no boundaries. Participants were briefed on the current situation of the coastal aquifer and were shown images of how the water on these beaches are polluted. The next stop was the extremely polluted Wadi Hanoun. Where Gazans have begun pumping sewage into Nahal Hanun, which crosses Israel and empties in the sea. Bromberg explained to participants the urgent environmental hazard, which began to pollute groundwater from the coastal aquifer. With no wastewater facilities in Gaza, the water pollution continues to increase at dramatic rates.

Another stop on the tour was at the Anzak Observation point. Where the waste issue was pointed out in terms of how illegal landfills were being handled across the board and how these activities directly affect the health of Israelis as well. 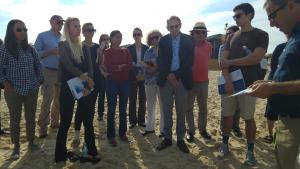 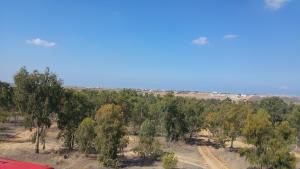