by Afaf Maraqa, Otmar Oehring
The Workshop on “Youth Strategy to Combat Societal Violence in Jordan” was organized by Konrad-Adenauer-Stiftung and Action on Societal Violence- KAFA. It was attended by around 45 young men and women from nine governorates of Jordan.
December 17, 2013 Ordering Information

The Workshop on “Youth Strategy to Combat Societal Violence in Jordan” was organized by Konrad-Adenauer-Stiftung and Action on Societal Violence-KAFA. It was attended by around 45 young men and women from nine governorates of Jordan. The age group was 17-30. The participants are either students or professionals in various fields, have varying degrees of experience in voluntary work and had received training by Jordanian and international NGOs. Four members of the Jordanian Youth Parliament also participated.

Objectives of the workshop:

To bring together young men and women from the various governorates of the north, south and centre of Jordan to formulate a strategy and a plan of actions which they will implement in their cities and towns in order to decrease societal violence.

The proceedings of the Workshop

By breaking up the group into groups, the facilitator moved the participants into formulating their vision (“Towards Jordan free of societal violence”) and mission: (To create a complimentary and cooperative environment in Jordan to reduce societal violence through awareness raising and capacity development).

The participants agreed that the target groups for their work will be the following:

•Upper and lower houses of parliaments

•Local communities, including home makers and the un-employed

They also identified the groups which may be of assistance and support to their work:

•Government institutions in Amman and the governorates

The group afterwards carried out a SWAT analysis of its internal and external environment and defined its objectives and its strategies for 2014-2015. It also identified its action plan for 2014. (The drafting of these is currently being finalized and will be submitted with the strategy document.)

The immediate next steps are:

•To finalize the strategy document, print it and officially announce it to the media

•Arrange visits to the possi-ble supporting groups to in-troduce the strategy to them and garner their support to the action plan items.

•Nominate coordinators for the groups in the various areas of Jordan. These will function as focal points of contact with KAFA and will assist in the organization of the group members on the ground

•Solicit funding for the activities, either from local institutions/companies or international donors.

A secret Facebook page has already been established for the participants and administered by KAFA. Steps to follow are already being discussed and the members of the group are showing enthusiasm for the work ahead. 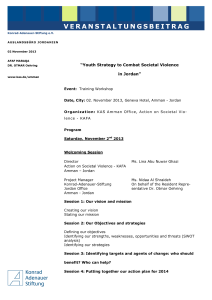