Visit of Leading Journalists from Egypt, Jordan and the Palestinian Territories

From April, 3-10, 2011 six leading journalists from Egypt, Jordan and the Palestinian Territories joined Dr. Martin Beck, Resident Representative of the KAS Amman, in visiting the media cities of Berlin and Hamburg, Germany. There, the journalists had the opportunity to engage with German journalists on a professional level and to discuss a variety of issues with leading representatives of German politics.
June 7, 2011 Ordering Information

In early April, six leading journalists from Egypt, Jordan and the Palestinian Territories joined Dr. Martin Beck, Resident Representative of the Konrad-Adenauer-Stiftung (Amman) and Viktoria Kleber, participant of the Journalist Academy of the Foundation in visiting the media cities of Berlin and Hamburg, Germany. The targets of the trip were to introduce the Arab journalists to the German media environment, to engage with German journalists on a professional level and to enable them to discuss a variety of issues with leading representatives of German politics. The Arab journalists not only came from different countries, but also from different journalistic areas. From Egypt, there were Rania El-Malky, publisher of the English-speaking daily newspaper Daily News Egypt and Shahira El-Rafei, editor in chief of the largest Egyptian daily newspaper Al-Ahram. The Palestinian Territories were represented by May Ahmad Mustafa Al-Bakri, a TV host at the Palestine Broadcasting Cooperation (PBC), and Souleiman Muhammad Qous, a leading journalist from the daily newspaper Al-Quds. Finally, Aida Tawil, editor in chief of the website www.women.jo and Lina Ejeilat, blogger, reporter for Reuters and lecturer for digital media at the Jordan Media Institute came from the Hashemite Kingdom of Jordan.

The Arab delegation met with the following dialog partners in Hamburg and Berlin:

-Olaf Schiel (Editor of the Politics Section of the BILD Hamburg)

-Joachim Hörster, MP (Chairperson of the Parliamentary Group for Arabic-speaking countries of the Middle East, Berlin)

-Dr. Guido Heinen (Director of the Press and Communications Department of the German Parliament)

-Ruprecht Polenz, MP (Chairperson of the Committee on Foreign Affairs of the German Parliament)

-Gabriele Baumann (Teamleader for domestic programs of the Konrad-Adenauer-Stiftung, Berlin)

The Media across the Middle East face similar social and political challenges and especially in the context of the current Arab uprisings, professional and independent journalism in the Middle East is increasing in importance and gaining new possibilities. The uprisings in Tunisia and Egypt have shown the power and relevance of internationally oriented media, such as private TV channels and the Internet.

The Egyptian, Palestinian and Jordanian media play an increasingly supportive role as serious and independent forces in political news coverage as they provide a more critical social discourse and are able to have an impact on public opinion. However, various political obstacles remain.

In this political and social context, the first aim of the visit was to strengthen the relations and the mutual understanding between German and Arab media representatives.

In addition, it was not a coincidence that five of the six participants were women. There is a need to improve the status and experiences of women in media-related jobs in the Middle East. The KAS highly supports networking between female journalists in Arab countries in order to improve the status of women in the media and to strengthen gender-specific perspectives.

The third overarching aim of this visit was the promotion of regional networking and cooperation. In addition to cross-cultural dialogue, the journalists’ visit of the KAS was aimed at collaboration in order to contribute to a durable, independent journalism and to promote freedom of the media.

The visit of the Arab journalists to Germany focused on two main aspects: first, the German media system and, second, German foreign policy in the Middle East.

Talks with Representatives from the media

The visit started with an introduction to the German media landscape and the operating mode of the media system by Hermann-Dieter Schröder of the Hans-Bredow-Institute for Media Research of Hamburg University. While explaining the operating mode, he emphasized the role allocation between public and private media.

Talks and visits of different media offices in Hamburg and Berlin gave insights into the routines of the editorial departments, but above all into the political and social diversity of the German media landscape. The participants were presented a large range of media: ranging from the NDR and the Deutsche Welle to the BILD and taz, including the Spiegel.

NDR news editor Marjan Parvand discussed the pros and cons of public broadcasting and the use of new media such as Facebook and Twitter with the Arab journalists. Her own migration background led to conversations about the integration of ethnically diverse journalists in the German media system.

Daniel Steinvorth and Catherine Stockinger from the Spiegel introduced the publishing company and its range of products. The following conversation revolved around the news coverage of the Arab uprisings. The Arab journalists positively perceived the English-speaking website of spiegelonline and its recent news coverage. The delegation showed particular interest in the distribution of company shares. Over 50% of Spiegel Publishing is owned by staff members, which strengthens the independence of the Spiegel. The Egyptian journalists were particularly interested in this model.

During the visit to the Axel-Springer publishing house and the BILD editorial office in Hamburg the journalists were able to take part in an editorial meeting. Olaf Schiel explained how the editorial staff of Axel-Springer Publishing is contractually bound to support the right to exist of the Israeli people. This is linked to the personal past of Axel Springer, the founder of the publishing house. This contractual tie was criticized by the group because it could lead the journalists to be one-sided and pro-Israeli in their reporting.

The tour of the daily newspaper taz showed that it is possible to reach a secure place in the German media landscape without extensive financial means. According to Steffen Grimberg, this requires idealism, creativity, and the ability to occupy a market gap. The Arab journalists found the organizational structure of the taz as well as the way ownership is divided interesting.

During the discussion at the Deutsche Welle, participants focused on tactics to deal with financial cuts and how budget concerns might affect Arabic language programs. This was followed by a critique of the coverage the Deutsche Welle provided of the Arab uprisings.

Thomas Habicht, a free-lance columnist, who specializes on Berlin, talked about the relations journalists in the capital have with politicians. He explained that knowledgeable sources are necessary in order to have early access to information. Mr Habicht also spoke about the informal understandings that exist between journlists and politicians. For example, journalists avoid asking about politicians’ private lives and do not quote statements given in confidence.

During the talks with the German blogger Lorenz Matzat, some of the journalists explained that a blog in the Arab World can have a far greater importance than it can in Germany. In fact, in the Arab region, a blog is often the most important means of free expression. In Germany, however, there exist many outlets through which freedom of expression may be exercised.

To provide insights into the vocational training of German journalists, Rudolf Porsch gave a presentation on the Axel-Springer Academy. He focused on new media training related to blogs, videoblogs, and Facebook.

At the German Press Council, Ella Wassin introduced the German media principles, the so-called press codex, implying a personal duty to respect these principles. Although the Arab delegation did welcome the idea of a press council, they seemed skeptical of the effects if a similar institution were to be established in the Arab World.

Talks with Representatives from the Political Sphere

The second focus of the delegation’s visit was directed towards German politics. Participants met experts who work in both media and politics and also representatives with a political focus on German foreign policy towards the Middle East.

Dr. Guido Heinen presented the press and communication work of the German Parliament. After attending the federal press conference, government spokesperson Steffen Seibert took the time to meet with the Arab delegation. They discussed the reasons a journalist might change to a career in politics. Mr. Seibert gave insights into the close and trustful collaboration with Angela Merkel. He talked about the ability to have a direct influence in politics. This was followed by a debate on the German abstention from the intervention in Libya, which was generally criticized by the Arab journalists. The Palestinians were particularly interested in whether Germany will support the planned creation of a Palestinian state. Mr. Seibert made it clear that Germany, due to its past, is bound to protect Israel’s right to exist and it will remain one of Israel’s closest partners. The creation of a Palestinian state could only be accepted under certain conditions.

Another highlight was the meeting with Ruprecht Polenz, Chairperson of the Committee on Foreign Affairs of the German Parliament. Mr Polenz explained the German interests in the Middle East and made it clear that Germany was committed to ensuring Israel’s security. He said that Israel needs to have a consolidated place in the Middle East with secure borders and recognition as a legitimate state by all its neighbors. The Arab journalists showed understanding of the German position. However, they critically asked why German support didn’t end there. The delegation pointed to Israel’s breach of international law and the denial of the Palestinian’s right to self-determination. The Egyptians were interested to know what influence the future Israeli-Egyptian relationship will have on the relationship between Germany and Egypt. Mr Polenz answered that peaceful relations with Israel would also be advisable to Egypt. The collaboration between Germany and the Palestinian government under Hamas was a question that was of particular interest to the Palestinian journalists. Mr Polenz assured that Germany will work with any Palestinian government, as long as it is democratically elected, it distances itself from violence and it doesn’t question Israel’s right to exist.

Ruprecht Polenz, Chairperson of the Committee on Foreign Affairs of the German Parliament

During the talks with the Members of Parliament Jürgen Klimke and Joachim Hörster, the group was able to discuss previously mentioned topics: the German abstention from the UN vote regarding the Libya intervention, the German role in the support of the project to build a Palestinian state, and the relationship between Germany and Israel.

The Jordanian participants also used the opportunity to discuss German foreign policy towards the Hashemite Kingdom with the parliamentarians.

Throughout their visit, the group of Arab journalists seized the opportunity to meet and exchange ideas with representatives of German media and politics. The dialog partners also showed a great interest in the developments in the Arab region and benefitted from the assessme nts made by the Middle Eastern. The Arab delegation will be able to take home the impressions and insights they gained during their visit and will contribute to the progress of an independent media landscape there. 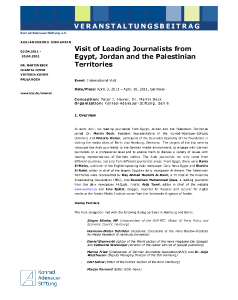 Visit of Leading Journalists from Egypt, Jordan and the Palestinian Territories (Pdf)
Download