Civic education - A vehicle for change

On Saturday, November 27 and Sunday, November 28, 2021, the Jordan Office of the Konrad-Adenauer-Stiftung, in cooperation with its partner, the Jordanian Centre for Civic Education (JCCE), hosted a two-day conference on "Preventing Radicalization Through Education - A Regional Perspective." As panelists, three guests from Tunisia, Egypt and Palestine, in addition to Jordanian political analysts, educators, government officials, academics and religious figures took part in the discussions.
December 16, 2021 Ordering Information

The conference was held under the patronage of the Jordanian Minister of Political and Parliamentary Affairs, Musa Al-Ma'aytah, who in his welcoming address emphasized the role of pluralism and dialogue between different social groups in Jordanian society. He said that for the establishment of party political work and pluralistic structures, it is important to develop a civic culture that contributes to the consolidation of dialogue and inclusion of women and youth on the basis of appropriate legislation. Edmund Ratka, head of the KAS Jordan office, affirmed that political education is the basis for democratic processes.

During the various discussion rounds, experts, teachers and young people from Jordan and other Arab countries spoke about ways in which civic education can strengthen Jordanian society. According to the participants, civic education is an essential step toward modernizing the country by preparing citizens for the future and promoting tolerance and diversity.

In connection with this, the importance of political will was emphasized, in addition to the interaction of various social actors. For example, policy should aim to promote inclusive civic engagement in which women and youth contribute equally to political reform. Following participants’ perspectives policymakers must take sustainable steps to promote free thinking and knowledge gain. Here, according to participants, the support of teachers played a key role.

In order to understand Jordanian society as a whole, a glance at identity and religion is also useful. In particular, social heterogeneity and tribal structures deeply rooted in society have an impact on the country's political landscape. Political education could help establish civic structures and improve the party landscape the participants agreed. In addition, religion plays a significant role in Jordanian society. According to the panelists, this should encourage citizens to approach each other and work together for peace.

Finally, the participation of women in public life was discussed. In particular, the prejudices and entrenched gender roles stemming from tradition and religion make it difficult for women to gain a foothold in Jordanian politics, for instance. As a result of specific support for women and a growing awareness of gender inequalities among the population, changes could be seen in the long run. 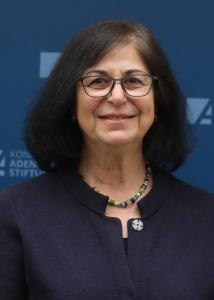