The workshop “Women and Media“, organized by KAS Amman and First Media Company took place in Amman on February 11th 2012. The main goal of this workshop was the identification and analysis of the severe difficulties of women in gaining leadership positions in the Jordanian media sector. The different sessions targeted the various reasons for this problem and aimed for solutions eventually leading to gender equality.
March 9, 2012 Ordering Information

President of South North Center For Dialogue and Development

Women in the media have proven themselves to be as competent, qualified, and ambitious as their male counterparts – in some cases even more so. Recent statistics show that the majority of journalism students in Jordan’s universities are female. Yet, at them same time, men still overwhelmingly hold senior positions in media organizations. This shows the urgent need to address the causes which hinder women from reaching senior management positions in such a vital sector.

Under the patronage of the former Minister of Political Development, HE Dr. Sabri Rbeihat, the First Media Company and Konrad Adenauer Stiftung Amman/ KAS Amman organized a workshop entitled “Women and the Media.” It aimed to highlight and discuss the main challenges women face while advancing their careers in the media. The workshop succeeded in bringing together media professionals and students to address this issue, find solutions, and offer recommendations.

Ms. Nidaa Shraideh, moderator of the workshop, indicated that over the last thirty-eight years only seven women were offered a chair position in the Jordanian Press Association, although the Jordanian constitution ensures the equality between the two sexes in rights and duties.

Mr. Maher Madieh, Director of First Media Company, commended the crucial role women play in the media. He added that he would like to see more women in senior positions and that the rapid changes in media – particularly in the field of social media – will help to bring about this vision through a higher number of jobs in the sector.

Dr. Martin Beck, Resident Representative of KAS Amman, began by commending the new but valuable partnership between First Media Company and KAS Amman. He stressed the importance of the media’s role as a reflection of society and culture. Because of this, he added, there should be adequate representation of both genders in decision making positions.

HE Dr. Rbeihat, began by noting that the Arab culture is traditionally Bedouin which is highly dependent on male labor and patriarchal in nature. This, he stated, is the main cause of women’s delayed entrance into most working sectors. He attributed the modest representation of women in senior positions in media to cultural obstacles, not legislative shortcomings. He closed his speech by offering a positive view of social media and its influence on increasing women’s achievements in media.

HE Dr. Nabeel Al Shareef, former Minister of Information and Communications Technology, acknowledged the fact that women suffer from gender discrimination in the media. However, he also praised the long list of the Jordanian female media figures that are very well known on both Arab and international levels. These women are a credit to female journalists everywhere and demonstrate competency in high positions.

HE Dr. Al Shareef commented on the negative portrayal of women by the very same organizations which prevent them from equal standing in the work environment. He considered what he called “the media feminine symbolic representation” to be an extremely dangerous form of gender discrimination – as some media organizations are keen to hire a certain number of females for insignificant positions as required for the quorum. The problem is exacerbated by women who legitimize such acts by accepting these positions, and hence, contribute to a ‘simulated’ representation.

HE Dr. Al Shareef recounted his experience as the editor-in-chief for one of the largest daily newspapers. He held women accountable, to some extent, who accepted secondary positions and provided multiple examples from his years in the industry. HE Dr. Al Shareef concluded by noting that the seven most popular blogs in the country are operated by women – an indication of a promising future for female media specialists.

Session 2: The ‘Gender Gap’ in the Media

Ms. Suhair Jaradat, a journalist and one of the only seven women to be a chair in the Jordanian Press Association, fascinated the participants with accounts of the obstacles and challenges she faced during her career and how she overcame them. Ms. Jaradat provided statistical indicators of women’s representation in the media sector. Whereas 19% of Jordanian Press Association members are female, only 1% of them hold senior management positions. She also noted that this partially stems from women’s underrepresentation in political life.

Ms. Alia Idriss, media expert working at Jordan Television, stressed that there is a gap between the reality and the media topics related to women. She provided examples of media programs which propagate this notion – particularly those shows which focus on fashion and cooking – contributing to the marginalization of women while neglecting sensitive and pertinent issues.

Ms. Idriss presented some suggestions to activate the role of women in the media through:

-Changing Media stereotyping of women as housewives and mothers only.

The workshop was fruitful in terms of discussing the obstacles facing women in reaching high positions in the media, especially with the presence of many female youth media specialists who discussed related issues with the speakers and tried to propose solutions and recommendations to the different problems.

Links about the workshop: 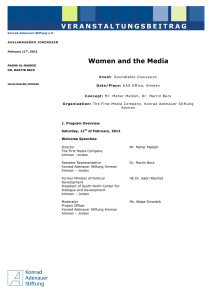