Women’s Rights in Society and Politics

Director of the Lebanese Council of Women

As women of many different countries still face discrimination and unequal legal position before the law, the implementation of women's human rights worldwide is becoming more and more important. With the declaration of International Women’s Year in 1975 by the UN General Assembly and the ratification of various international conventions and human rights instruments such as the Convention on the Elimination of All Forms of Discrimination against Women in 1979, many governments have embarked upon the road towards committing to genuine gender equality. Yet, abuses, discrimination and violence against women are still common around the world, also in the Arab World, where the women’s right of participation in public life is restricted and when they do not enjoy legal equality, in particular in terms of family law provisions.

KAS Amman organized on October 11 until 13, 2010, a joint workshop with the Jordanian Center for Civic Education Studies (JCCES) in Beirut to dis-cuss with women representatives of governmental and non-governmental organizations how to bring about the empowerment of women in all spheres of life and how to better promote women's human rights issues among women form different Arab countries. During the three day workshop 22 women form Jordan, Iraq, Lebanon and Syria were trained in different aspects of women’s political participation and the legal and social status of Arab women.

Mona El Alami, Director of JCCES, welcomed the KAS representatives, the trainers and participants. She gave a short overview over the work of JCCES and then focused on the key topics of the workshop. She pointed at the growing importance of the subject of women’s rights in international politics and emphasized that the topic is gain-ing recognition as an important tool to foster values such as justice, peace, equality, tolerance and respect for human dignity among students and trainers. It is crucial to promote the implementation of human rights and women’s human rights education in specific throughout all education systems.

Dr. Martin Beck, Resident Representative of KAS Amman, first presented the key topics of the workshop. He pointed out that there is an increasing need of training courses to raise awareness about women’s rights and that the workshop will outline ways to promote the role of women in politics and society in the Arab world.

Dr. Aman Kabbara Chaarani, Director of the Lebanese Council of Women, pointed out that political action became an important means to campaign for citizen's access to political rights such as the right to vote or to run as candidates, to form political parties or socio-political movements.

Through organizing petitions, media or education campaigns women can fight against the suppression of women's human rights. Dr. Chaarani stated that women have made some achievements in the field of education, health and politics through the quota system. Some Arab governments, such as in Lebanon or Jordan, have taken steps to increase women’s participation in poli-tics introducing a quota system that entails that women represent a mini-mum level in parliament.

She emphasized, however, that if the institutional framework of parliament is weak, women might experience difficulties in influencing policy making and challenging the political agenda. Then, she discussed one of the key international conventions to secure equal rights of women, that is the Convention on the Elimination of All Forms of Discrimination against Women (CE-DAW), which was adopted in 1979 by the UN General Assembly.

Although many Arab states have either signed and ratified or acceded to the international bill of women’s rights, gender inequality is still a pressing problem in most Arab countries.

Amara Benromdhane, regional advisor in human rights and trainer of the workshop, presented at the beginning of the first session his training plan. He started his training introducing the con-cept of equality, which holds that all people should be treated as equals on all dimensions, for example socially, religiously, culturally, politically and economically.

He said that equality is a key prerequisite for any kind of social, political or economic development and that in order to enhance development work people should first address problems of inequality. He subsequently discussed the question of how the Islamic Law - extracted from Qur’an and Sunna (Fiqh) - deals with the concept of gender equality.

Afterwards he divided the participants into five different working groups which worked on the underlying causes of gender inequality, the concept of political participation and how to fight gen-der disparity in the political, social, cultural and economic sphere. The par-ticipants also discussed ways of com-bating the marginalization of poor and socially excluded women.

During the last part of the first work-shop day, the participants collected the results of the working groups and discussed the main points. In order to encourage the active participation of women in politics and society, governmental economic and social policies should guarantee women’s equality in decision-making and powersharing to foster women’s advancement and development.

By implementing legal systems aimed at eliminating the discrimination against women, governments should ensure equal legal protection of women and create an enabling environment where women enjoy all fundamental freedoms and human rights. Another major point is that discriminating societal attitudes and community practices ought to be changed in order to fight violence against women. Finally, equal access to women to education, employment and health care should be strengthened.

On the second workshop day the trainer, Mr. Amara Benromdhane, focused first on family dynamics and the status of women. Since women have assumed new economic roles nowadays, their position within the family structure has been deeply affected.

The traditional roles of family members, especially those of women, have been called into question as new living arrangements between parents, children and other relatives have shaped common forms of households.

Many Arab women have become more autonomous and some even gained acceptance as the head of the family or breadwinner. In many Arab countries there is, however, no true equality be-fore the law between men and women.

Regarding inheritance for example, the Islamic law allots women only half the share of inheritance available to men who have the same degree of kinship. Furthermore, on the basis of a decision by the Federal Supreme Court in the UAE, a husband has the right to castigate his wife and children with physical violence. Mr. Amara Benromdhane concluded that there is an urgent need to promote judicial reform to ensure equal legal protection and to fight violence against women in the Arab world.

He then discussed ways of how to en-hance women's leadership. He said that reforming electoral processes, support-ing political parties and strengthening parliaments, judiciaries and the civil service would help increasing the role of women in public office.

Nevertheless, many women lack financial security and may not afford to run for elections. Often, they are not encouraged in their political aspirations by their families and encounter hostility. To better integrate gender equality in democracy-building, the ratio of women in political parties and decision making bodies must increase and political parties should focus more on women issues. He added that women's organizations play a key role in advocating women's rights issues on the political level.

In the following, Mr. Amara Benromdhane discussed with the participants the role of women in education. He underlined that the stereotypical image of women in textbooks is seen as an important source for the concept of the conservative role of women in family and society.

One reason is that women do not take part actively enough in the develop-ment of school text books, other teaching material and school curricula. Furthermore, women’s literature is almost totally excluded from school curricula. During the last part of the second workshop day the expert discussed to-gether with the participants the role of women in the media.

The media plays a major role in shaping public opinion and transmitting a certain image of the status of women in the Arab world. Women are generally depicted as unskilled, traditional housewives who are submissive to men and busy with their children and their daily chores. Usually, the media does not report on success stories of Arab business women or on social or economic problems that poor marginalized women face in every day life.

The participants underlined that the media should better reflect the true role that modern women play in society.

Mr. Amara Benromdhane opened the third workshop day reviewing the discussion findings of the previous two workshop days. He subsequently started a discussion on Islam, family and the status of women. In Islam, the family unit is regarded as the most important nucleus of society. Islam’s so-cial system is based on the family and the family itself is deeply embedded in Islamic societal and governmental structures. Despite the many changes Muslim families face, the family institution remains strong.

He discussed with the participants the role of women in the Muslim family, the privileges of men and the positions of women in society and politics depend-ing on different national contexts. The participants intensely debated the various state policies, religious practices and the processes of social and economic change within which Arab women individually or collectively try to cope with the challenges of their daily lives. In the end, each participant gave a short summery of problems or achievements of women in her respec-tive country.

During the joint workshop with the Jordanian Center for Civic Education Studies, the participants were trained in women's human rights issues and women empowerment on the political, social, economic and cultural level. The participants were provided with different ways of promoting gender equality and women participation in politics and the public service. The workshop offered an opportunity for female representatives of Jordanian, Iraqi, Lebanese and Syrian organizations to come together and exchange opinions and experiences in the field of women’s rights in the Arab world. The very lively and productive discussions showed that many Arab women still lack opportunities of free debates on women issues and the participants therefore highly appreciated the intensive exchange of views on current women’s human rights topics. They emphasized that the training helped increasing the awareness on all different aspects of women empowerment.

The workshop was a success in terms of familiarizing the female political and social leaders with different aspects of enhancing women’s rights in society and politics. The participants commented positively on the quality and efficiency of training by Amara Ben-romdhane, as well asthe organization of the workshop. 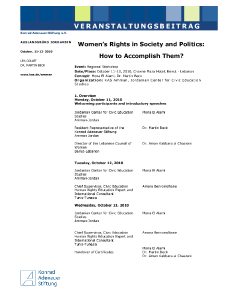