Opening of the German week: KAS presents the “Wahl-o-Mat”

Opening of the German Week at the Jordan Museum
September 18, 2017 Ordering Information 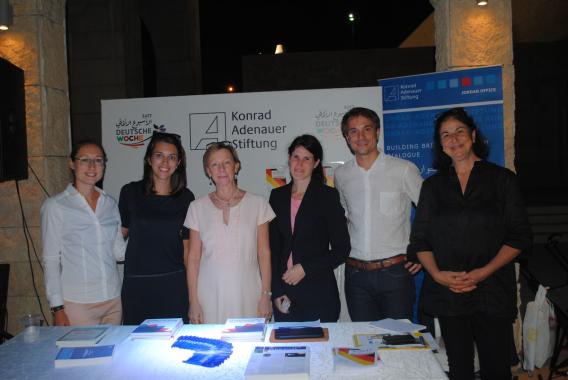 The German week 2017, taking place from 16th-21st September under the patronage of H.R.H Princess Sumaya bint El Hassan and H.E. Dr. Saleh Al-Kharabsheh, Minister of Energy and Mineral Resources, had its grand opening at the Jordan Museum on 16th September 2017.

Celebrating the long-standing partnership between Germany and Jordan, the German week tries to bring to awareness the presence of various German organizations in Amman and their role in strengthening the Jordanian civil society. The opening of the German Week included a market place with many German organizations, ranging from political foundations such as the Konrad Adenauer foundation to the German Jordanian University and the Goethe Institute among many others.

Facilitating civic involvement and promoting democracy are among the main aims of KAS in Jordan and led to a participatory approach at the market place. The upcoming federal election in Germany on 24th September served as a starting point for presenting the “Wahl-o-Mat”, an online tool to identify which party one shares the most political views with. In addition, interested visitors took the chance to receive information about the German election system and the parties most likely to become a member of the parliament.

The Konrad Adenauer Foundation will further contribute to the German week by conducting a workshop on political satire in Jordan in cooperation with Imdad Media Centre on Thursday, 21st September 2017, 3:30 – 5:30 pm.