by Dr. Otmar Oehring, Imke Haase
Jordan has recently witnessed a noticeable rise in incidents of societal violence. These acts of violence manifest in different ways, ranging from verbal acts of violence and vandalism to shootings or even murder. To face this grievance, the book “Societal Violence in Jordan: Reasons and Solutions” sheds light on the factors of the violence from different perspectives, whether the political, economical or social one.
April 16, 2014 Ordering Information

Presentation of the Main Ideas in the Book

Jordan has recently witnessed a noticeable rise in incidents of societal violence. These acts of violence manifest in different ways, ranging from verbal acts of violence and vandalism to shootings or even murder. To face this grievance, the book “Societal Violence in Jordan: Reasons and Solutions” sheds light on the factors of the violence from different perspectives, whether the political, economical or social one. The book is the outcome of the cooperation between the Non-Profit-Organization Action on Societal Violence – KAFA and KAS Jordan Office that organized a training workshop organized in September 2013. The ideas and concepts developed in this workshop aimed at fighting serious challenges of societal violence are now published in one book. Above all, practical approaches to solve the rising societal violence in Jordan should be pointed out.

Ms. Nidaa Al Shraideh, Project Manager at KAS Jordan Office and moderator of the book launch, welcomed all guests and authors of the book “Societal Violence in Jordan: Reasons and Solutions”. She stressed the relevance of the topic and highlighted the importance of the successful cooperation with KAFA. The book is the result of a seminar on societal violence in Jordan which was organized by KAFA and KAS Jordan Office in 2013 and encompasses the working papers presented by specialists in their respective fields of politics, economics, sociology, as well as the role of the Jordanian Ministry of Interior in this regard. Furthermore, it includes the final report and recommendations of the seminar. Ms. Al Shraideh thanked KAFA and all authors for their important contributions to the book and thus, advancing the topic.

Mrs. Lina Abu Nuwar, Director of KAFA, stated that the recent increase of societal violence in Jordan will on the short run infringe on human rights, affect social cohesion and livelihoods and obstruct the educational process as it increasingly occurs at universities and schools. In addition, on the long run, it will hamper development in all areas, including political reform towards genuine democratisation. Thus, the book presents a major response to this emerging phenomenon. She thanked the speakers at the seminar as well as all participants for enriching its deliberation and rendering the event a big success. She further thanked KAS Jordan Office for its continuous support of their work.

Dr. Otmar Oehring, Resident Representative of KAS Jordan Office, thanked Mrs. Lina Abu Nawar and KAFA for the successful cooperation on this topic and stressed the invaluable and unique relationship between the two organizations. He emphasized the need to address societal violence as a major challenge to Jordan in order to prevent the diminishment of the rule of law and instability of the country. The latest rise of violent events in Jordan shows the urgency of identifying both causes of violence and possible solutions. For him, the book “Societal Violence in Jordan: Reasons and Solutions” presents an important step to meet the increasing phenomenon of societal violence as the book points out ways to solve the issue from different perspectives.

Presentation of the Main Ideas in the Book

Former Minister of Political Development and member of the Jordanian Senate, HE Musa Al Maaitah pointed especially to the political reasons for the increased violence and introduced a definition, as well as manifestations, reasons and solutions of societal violence from a political perspective. He suggested that the strength of sub identities, whether in tribal, ethnic, or religious forms, has contributed to the failure in developing a political culture in Jordan. HE Musa Al Maaitah considers the decrease of the rule of law and the one-man-one-vote election law as one of the main reasons for the increased societal violence in Jordan. Thus, to solve the problem of societal violence the rule of law regarding all individuals in society must be promoted and consolidated.

Dr. Khaled Wazani, Senior Economist and Strategist, referred in the following session to societal violence from an economic perspective and reviewed the economic status quo in Jordan. According to Dr. Al-Wazani, the most important economic reason for societal violence is particularly the unequal distribution of wealth- in forms of income and rate of unemployment. Further reasons are the financial and administrative corruption, the level and quality of investment in human capital, the presence of a soft state and the weakness of the rule of law. To solve the problems from an economic point of view he mentioned (amongst others) the importance of improving the education system, the need to focus on transparency and the qualitative investment in human capital at all levels of human productivity.

Subsequently, Dr. Jihad Al-Muheisen, Director of the Al-Mashreq Al-Jadeed Research Centre, spoke about the social perspective of societal violence. He focused on violence from an Islamic and legal point of view by linking these two concepts with the concept of an oppressive state. Dr. Al-Muheisen emphasized that in oppressive states violence is a tool for the oppressor and the oppressed and the presence of tensions between the state and the society contributes to the creation of violence. He also raised the question of the origins of societal violence- whether it is inherent in Jordan or merely the result of political, social, and economic conditions.

All in all, the following recommendations can be retained:

•Focus on concepts of transparency, accountability and integrity of the Jordanian economy

•Review policies and the current government's economic programs on unemployment, to provide sustainable new jobs and improve the standards of living

•Qualitative investment in human capital at all stages of human production

•Improvement of the education system, especially at the primary level, whereby curricula would include lessons on societal violence

•Raising campaigns on the reasons and results of societal violence

•Apply the arms and ammunition law

The books will be distributed in universities and along organizations of the civil society and other relevant institutions which are involved in this topic to raise public awareness of societal violence in Jordan. 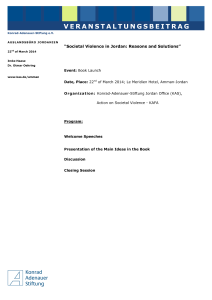