Toward a Sustainable and Digital Future of ASEAN? - Foundation Office Cambodia

Toward a Sustainable and Digital Future of ASEAN?

The Diplomatic Briefing is a biannual collection of categorized opinion pieces and short articles from an extended network of the scholarly community and regional experts, covering a wide range of issues from international relations, to sub-regional affairs, to foreign policy, to economic and trade, and beyond. Subscribe to Diplomatic Briefing for regular information about the publication.
February 1, 2021 Ordering Information

Toward a Sustainable and Digital Future of ASEAN?

The Diplomatic Briefing is a biannual collection of categorized opinion pieces and short articles from an extended network of the scholarly community and regional experts, covering a wide range of issues from international relations, to sub-regional affairs, to foreign policy, to economy and trade, and beyond. Under the new initiative of the Konrad-Adenauer-Stiftung (KAS) Cambodia and the Cambodian Institute for Cooperation and Peace (CICP), the Diplomatic Briefing aspires to serve the diplomatic community, policymakers, and interested stakeholders by providing insightful analysis of the latest trends and challenges in the arenas of regional and international politics and diplomacy. Furthermore, this publication provides a platform for intellectual exchange and grants emerging Cambodian scholars an opportunity to publish their research work.

The United Nations has unanimously adopted the Sustainable Development Goals (SDGs) in 2015 “as a universal call to action to end poverty, to protect the planet and ensure that all people enjoy peace and prosperity by 2030”. The 2030 Agenda for Sustainable Development Goals underlines global commitment and hence, serves as a blueprint to achieve a more equitable and sustainable future for all, abiding by the principle that “no one is left behind”. The 17 SDGs are fully integrated and the outcomes in one would likely affect the others, aspiring toward several life-changing “zeros”, globally including zero poverty, zero hunger, zero AIDS, and zero discrimination against women and girls. We strongly believe, that the achievement of these SDGs is feasible with the right tools of adaptive creativity, know-how, technology, and financial resources from every society in every context.

The Asia-Pacific region has made significant progress toward the attainment of SDGs, especially on the improvement of quality of education and access to affordable and clean energy. However, it has been argued that the region fell short regarding the share of renewable energy and is moving backward on two aspects: responsible consumption and production, and climate action. Although the region has achieved stable high GDP (as well as real GDP) growth rates over the past decade,3 it is severely lacking in term of human well-being and environmental sustainability. The “Asia and the Pacific SDG Progress Report 2020” released by the United Nations Economic and Social Commission for Asia and the Pacific (ESCAP) anticipated that the region is believed to miss the set SDG targets by 2030, given the current rate of improvements, and the lack thereof, in key areas related to poverty, hunger, gender equality and development gap within and between countries.4 Extra efforts from all concerned would be needed in order to mitigate challenges to effectively implement the 17 SDG targets by 2030 across the region.

With regards to environment, it was reported that 35 percent of countries in the Asia-Pacific region experienced a drastic loss of forest and it is the only region with a declining share of forest area; namely in Cambodia, Myanmar, Indonesia, and Timor-Leste.5 Air pollution remains to be a critical concern in the ASEAN region with its unceasing population growth and the concentration of urban density. The volume of hazardous waste generated has increased fivefold between 2000 and 2015, reaching nearly 40 million tons, with very limited efforts toward efficient waste management plans and the lack of capacity to recycle.6 ASEAN countries should put more emphasis on the sustainability-related goals, ensuring that they are not being sidelined for other interests. Failure to do so will put ASEAN at risk of losing its good record in relation to global sustainable development efforts.

Another point of discussion this issue touches upon is the allocation-policy of aid-to-trade funding in the region. It has been argued that the ASEAN countries, whom received around 30 percent of all aid-to-trade funding in the Asia-Pacific over the past five years,1 should allocate these resources more efficiently to increase their impact on behalf of achieving the SDGs by 2030. The same criticism has been voiced over personal remittances, which accounted for more than US$60 billion, approximately 2.8% of the total GDP in 2017.2 More inclusive stakeholder engagements, including government officials, regional analysts, and national experts, are needed in order to project appropriate methodologies and revise national and regional approaches. A change of direction is needed to better address the priority areas such that the acceleration to implement effective measures in order to fulfill the 2030 Agenda for Sustainable Development Goals.

We hope this second issue makes for a just as interesting read than the first issue, bringing together fresh perspectives and insights into the futuristic aspects as well as the worrisome development constraints that the SDGs face at the forefront. We welcome debates, thought-provoking dialogue and diverse perspectives, in order to make this Diplomatic Briefing live up to its standard: Fostering concrete and pragmatic ideas that make Cambodia, as well as the ASEAN region as a whole, a better place by forwarding its future development. 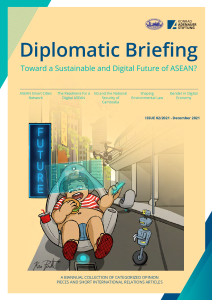