Lebanon’s Fiscal Deficit; How to address this urgent challenge

In collaboration with the Konrad-Adenauer-Stiftung (KAS), the Lebanese Forces Party organized a round table on “Lebanon’s Fiscal Deficit; How to address this urgent challenge”. The workshop took place on Wednesday 06, February 2019 in Citea Hotel Achrafieh and discussed ways to reduce the fiscal deficit in the budget. This workshop was the beginning of a series of workshops that will address the challenges of the economic and financial sectors affected by the economic development and growth in Lebanon.
February 6, 2019 Ordering Information 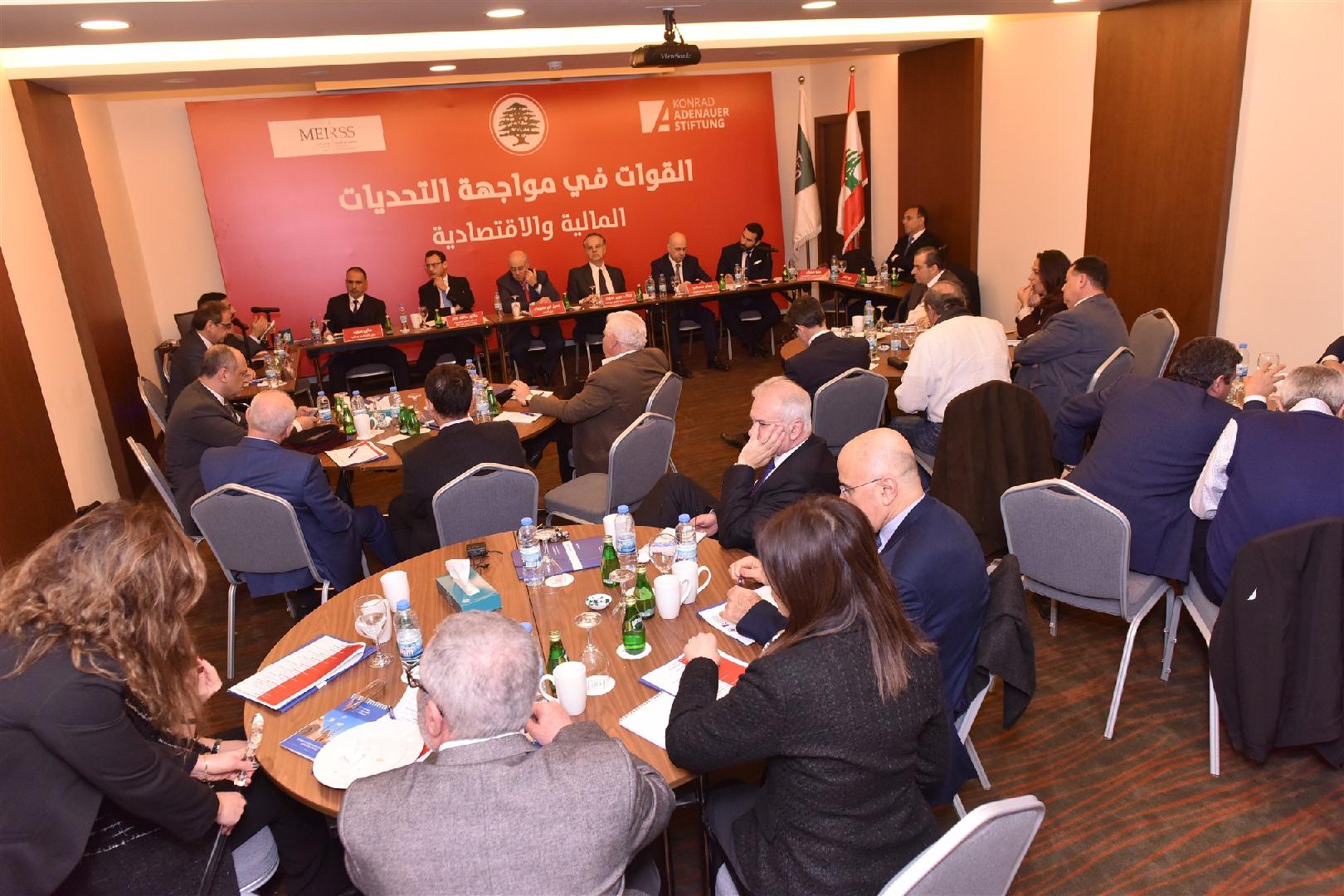 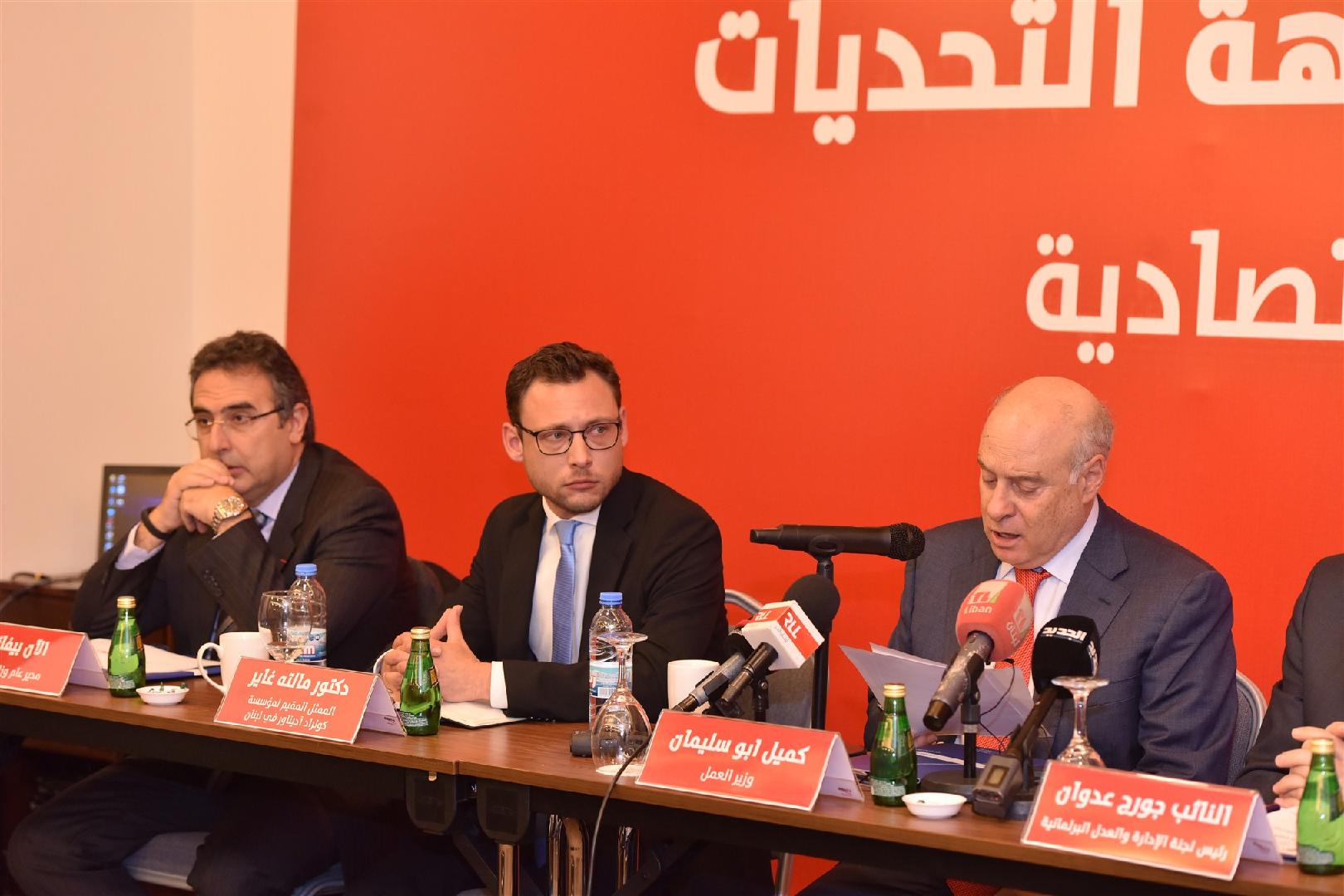 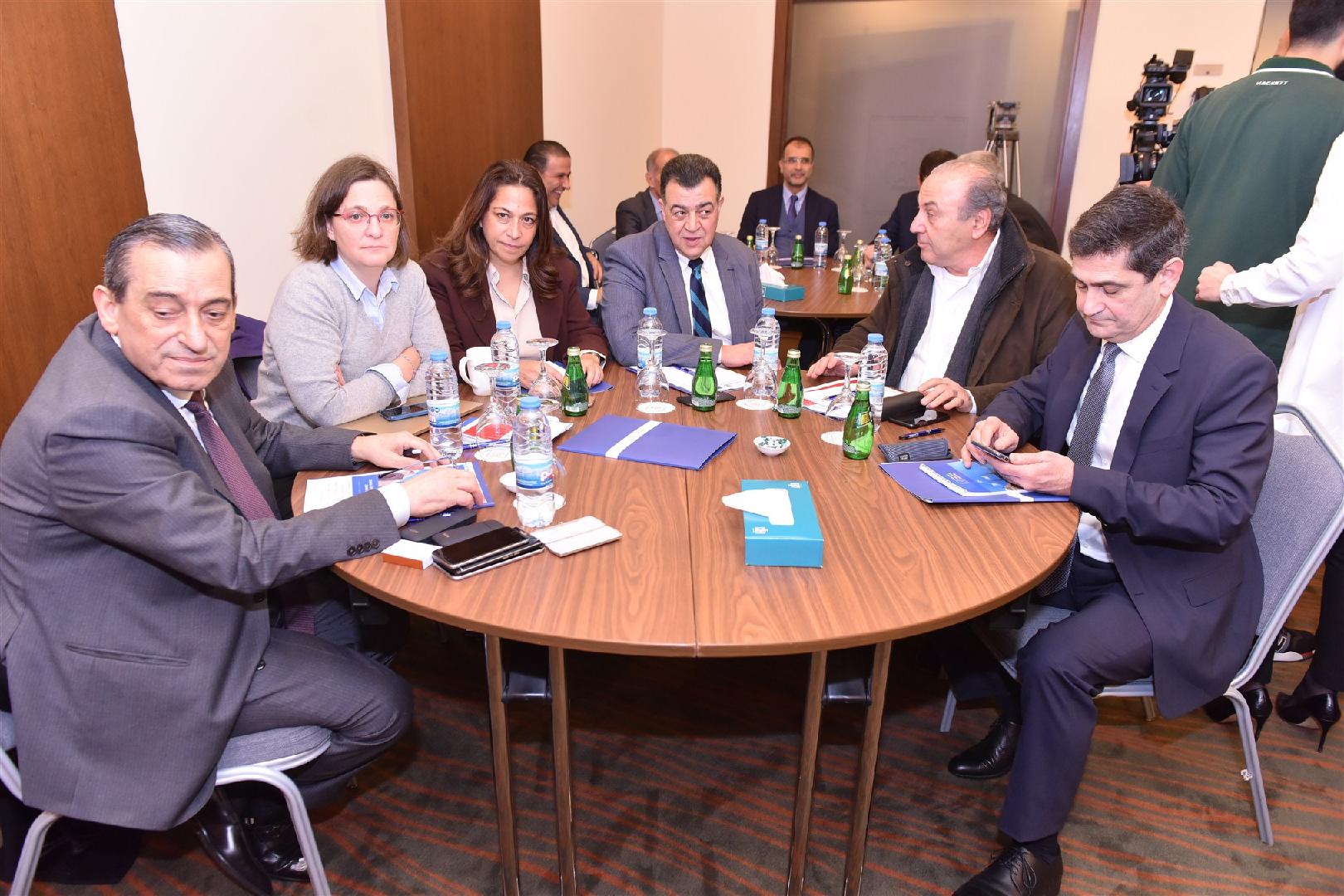 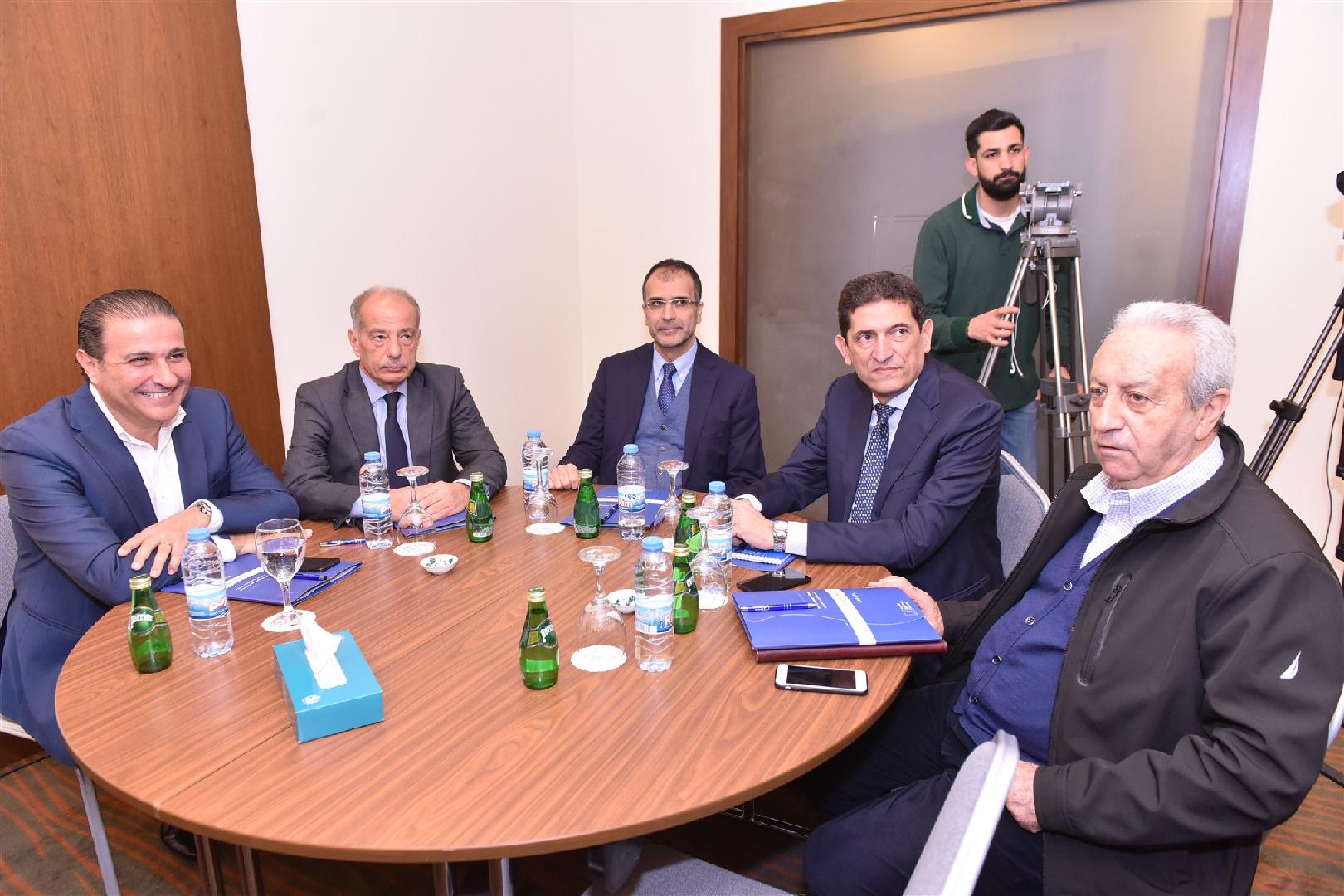 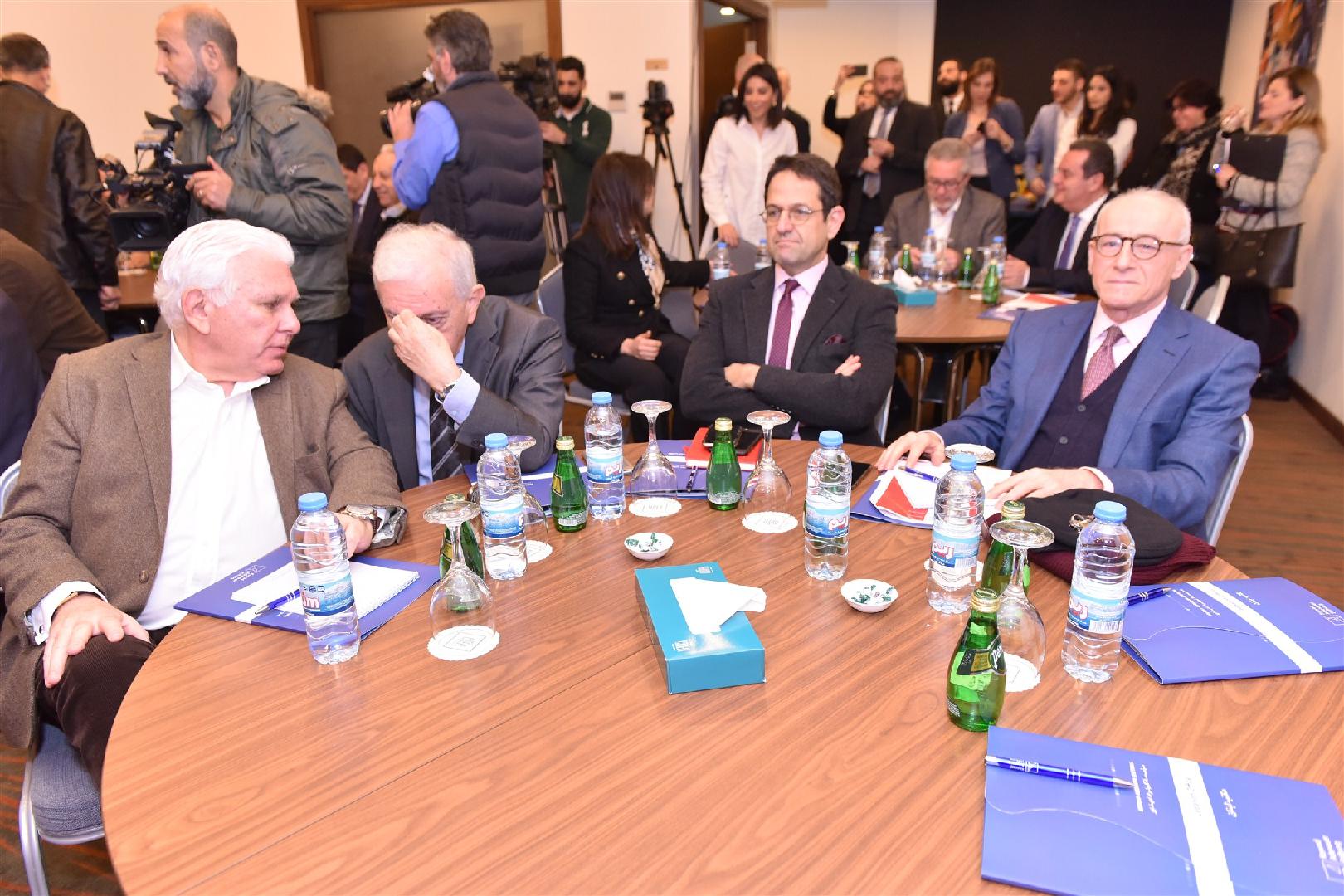 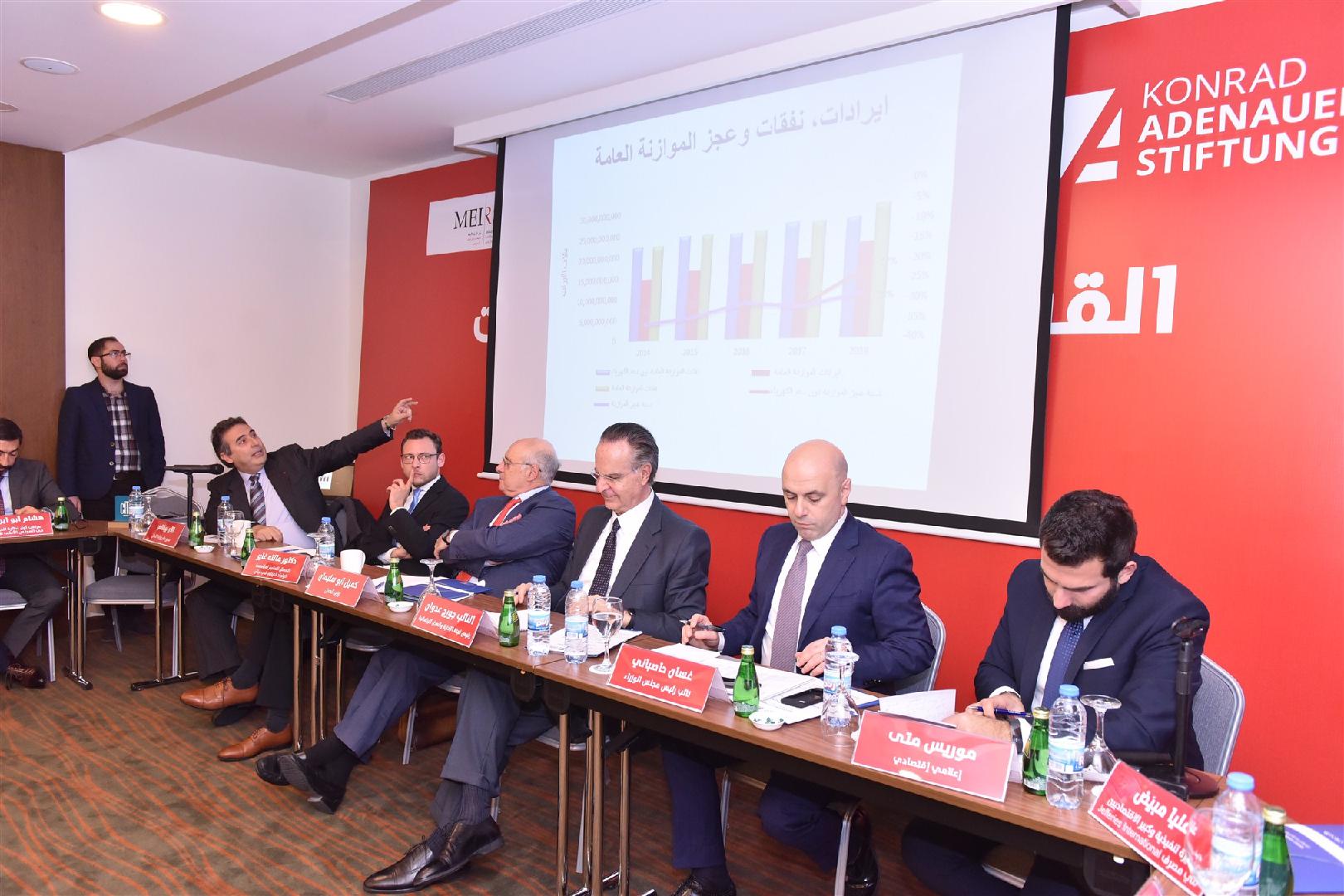 The workshop was moderated by the business news producer and presenter, financial analyst and economic media expert Mr. Maurice Matta and was opened by the Lebanese National anthem followed by the opening remarks of the minister of labor, Mr. Kamil Abou Sleiman and the resident representative of the Konrad Adenauer Foundation to Lebanon, Dr. Malte Gaier.

Mr. Abou Sleiman started by emphasizing the importance of this workshop to explain the economic and financial situation in Lebanon in public and to reach, after the deliberations, proposals on reducing the deficit. He then referred to the severe and worsening financial and economic crisis that Lebanon is facing and the warning of the relevant international financial institutions, including the World Bank, to the seriousness of this situation and the lack of action by successive Lebanese governments.

Mr. Abou Sleiman stated that one of the signs of the current situation is that the ratio of public debt to gross domestic product (GDP) in Lebanon exceeds 150 percent, the third highest in the world, and is on a continuous rise. The budget deficit has risen rapidly from 7 percent at the end of 2017 to more than 10.5 percent in 2018 and the general deficit will exceed 6 billion dollars. Debt to total income is expected to exceed 50 percent in 2018, therefore the highest in the world. It is likely that this ratio will continue to increase rapidly. He added that the government is facing large dollar debt benefits in the period from 2019 to 2022 and the Lebanese economy is in a recession, which can be seen by looking at the thousands of businesses that went bankrupt. Therefore, the view of the financial markets to sovereign risks in Lebanon is negative. This explains the reduction in the rating of "Moody's" for Lebanon in the month of December.

As a conclusion, Mr. Abou Sleiman affirmed that for the afore-mentioned reasons, the Lebanese Forces Party called for radical and urgent steps, away from political strife and for the benefit of the Lebanese people and that today they are fortunate to have experienced experts from both the public and private sectors to listen to their proposals on ways to cut costs and boost revenues. Based on their views and deliberations, he hoped that a vision and a series of measures will enable the ministers of the Lebanese Forces Party and their deputies to adopt serious, courageous and deliberate proposals.

The opening remark of the Konrad Adenauer Foundation was given by Dr. Malte Gaier, who expressed his pleasure to cooperate with the Lebanese Forces party to organize this seminar which analyzes the financial situation and policies and the budget for Lebanon, which witnessed nearly a week ago the birth of a new government.

Dr. Gaier pointed to previous events between the Lebanese Forces Party and KAS which tackled several topics, including e-government and the rule of law and public policy. He also considered that the confidence in politicians and political parties begins when citizens who live here see that there are people who care about their needs and listen to their aspirations and expectations to secure basic needs, including electricity and telecommunication.

Dr. Gaier concluded that Germany is interested in having a strong and stable partnership with the Mediterranean region and that it looks forward to cooperate at various political, economic and security levels to support all kinds of reforms.

Six contributions followed the opening remarks. The first one was by Mr. Alain A. Bifani, the Director General of the Ministry of Finance on “The Lebanese General Budget in Figures and Facts”. The second contribution was made by Dr. Nassib I. Ghobril, Head of Group Economic Research and Analysis of Byblos Bank SAL on “Salaries and wages in the general budget”. The economic and financial expert Mr. Mazen Sweid talked about the structural reforms in the Lebanese public budget. The first observer of the Department of Studies at the Supreme Council of Customs, Mr. Hisham Abu Ibrahim, stopped at the reality of customs evasion and countering the procedures. The head of the Lebanese Association for rights of taxpayers Mr. Karim Dahir’s contribution was on "Tax evasion in numbers and means of control and prosecution". The final contribution was given by Mrs. Alia Moubayed, the Managing Director, Sovereign Analyst, and Fixed Income Strategist at Jefferies on “Budget deficits, global financial markets and foreign investors' expectations for solutions”. The floor was then opened for discussions.

The rich discussions, conclusions and directives from the first workshop will be collected in a paper that will be included in the reform program to be presented by the Lebanese Forces Party during the closing conference. 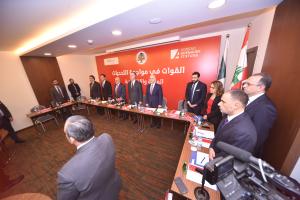 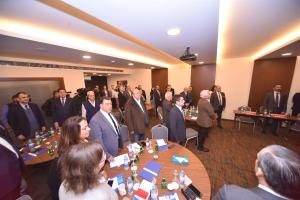 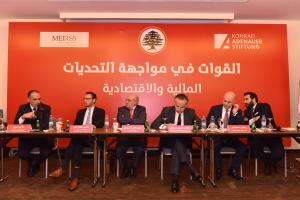 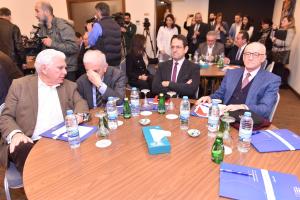 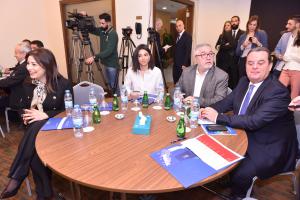