On the 31st of May, the Konrad-Adenauer-Stiftung, the Middle East Institute for Research and Strategic Studies (MEIRSS) & Regional Forum for Consultancy and Studies (RFCS) held a closed roundtable discussion to exchange ideas about the Policy Paper “Lebanon’s stability between international resolutions and regional tensions” by Former Brigadier General Khaled Hamade.
June 1, 2018 Ordering Information 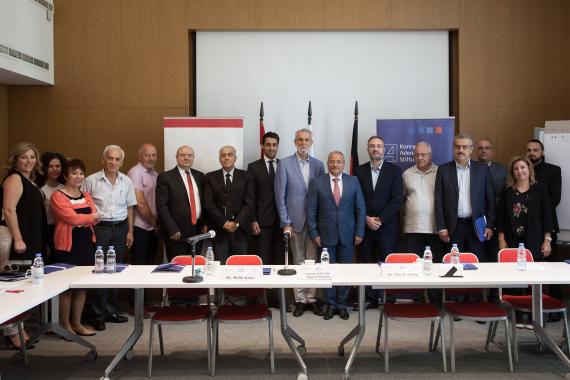 The event started with some welcoming words by Dr. Elie El Hindy, the director of the Middle East Institute for Research and Strategic Studies (MEIRSS), and by Dr. Malte Gaier, the Resident Representative to Lebanon office of the Konrad-Adenauer-Foundation. Both of them highlighted the importance of the topic and their wish for a constructive dialogue after the presentation of the policy paper published in cooperation with KAS and MEIRSS.

In his paper General Khaled Hamade, Director at Regional Forum Consultancy and Studies, takes as starting point the political compromise that was reached in order to elect the Lebanese President General Michel Aoun. He considers this settlement as the conclusion of a series of compromises expressing regional consensus, notably a Saudi-Iranian one supported by the international community that aimed at finding a solution to the two and a half year power vacuum. Following that, he presents six factors putting the presidential compromise at stake: Firstly, Lebanon witnessing, for the first time, a phase of convulsion from the Gulf countries. Secondly, the continuing “security vacuum” and lack of control over the eastern borders. Third, the ongoing situation in the south of Syria. Fourth, the capacity of Lebanon to implement international commitments. Fifth, international and regional stances on the expansion of Iranian influence. Sixth, Russia’s comeback on the international stage and the contradiction of Russian–Iranian interests.

In the debate following the presentation of his paper, the role of Saudi-Arabia, Iran, Russia and the international community, as well as the impact of international commitments and the war in Syria on Lebanon’s stability were also discussed among the participants.