There is seething unrest in South East Europe and immediately it is called ”Balkan Spring.” Many people are protesting in the capitals of Serbia, Montenegro, Albania and Croatia out of dissatisfaction with their governments. This frustration is targeted towards the media in these countries as well – especially the public service media which are frequently considered a mouthpiece of the government. The protesters therefore call for resignation of the general directors of the broadcasters.
March 12, 2019 Ordering Information

“There won’t be a Balkan spring,” says Maja Kocijančič, Spokesperson for Foreign Affairs and Security Policy/European Neighbourhood Policy and Enlargement Negotiations at the European Commission. “Protests in every country have their own characteristics and I would not compare those situations.”[1] But she admits that there are common elements like corruption, opaque power structures and lack of media transparency. Due to the wish of more media freedom, public service media (PSM) are also caught in the crossfire of the protesters. From their viewpoint, the PSM are too close to the government and are not reporting critically enough.

Since 2 February, every Saturday up to 10,000 citizens rally against the government in the Montenegrin capital Podgorica. This is a remarkable number considering the fact that the city has only 150,000 inhabitants. The cause for these protests was a bribery scandal which resulted in the initiative „Odupri se – 97000“ („Resist – 97000“). They demand resignation of president Milo Đukanović, who rules the country already for 30 years, and of further high-level officials from the government and judiciary. More than that, the protesters criticise general structural issues like the poor media situation. Hence, they request resignation of the Director-General of the public broadcaster „Radio Televizija Crne Gore“ (RTCG), Božidar Šundić, and the dissolution of the RTCG Council. One of the march’s organisers Omer Šarkić explains: “This is not a public service broadcaster, but a propaganda service. For 30 years it disinforms, disputes and divides us, instead of informing, educating and uniting us.”[2] Opposition parties called for boycotts of the broadcaster. Furthermore, they started a campaign against RTCG by putting stickers onto the RTCG building and other places in Podgorica.

Afterwards, RTCG released following statement: “The management as well as the editorial office of the public broadcaster warns the national and international public that RTCG is put under unseen pressure by media, political parties and civil society. It’s about open calls for boycotting the public broadcaster and for workers to ignore their tasks. With this model they want to create chaos in our media house. We understand the need of the protesters to express their wish for non-institutional change of government which is their choice; however we raise our voice against the manner by trying with explicit threats to influence the programme of the public broadcaster.“[3] Director-General Šundić told Dnevne novine daily that nobody would resign. The management did its job professionally and that only those who elected them can judge them. In addition he admits that it was legitimate to strike, criticise and request resignations.[4]

In Serbia people are already rallying for quite some time and demonstrating against President Aleksander Vučić. The protests began on 8 December in Belgrade – with the slogan „Stop krvavim košuljama” („Stop the bloody shirts!” “). The cause was an attack on the party leader of the Leftists Borko Stefanović. Since then protesters meet every Saturday in the streets of Belgrade and every Friday in the regions with paroles like „1 od 5 miliona“ („1 out of 5 million“) und „Počelo je“ („It has started“)[5] and ask for the full investigation of the attack. In the meantime other demands were added, e.g. more media freedom. On the website of the protest movement the explicit demands are listed. One of them is directly targeted towards public broadcaster „Radio Televizija Srbije“ (RTS):

On top of that protesters were also showing their unrest against public service media by putting stickers („1 out of 5 million“ or „censured!“) on the RTS building. By this campaign not only RTS was affected, but also pro-government private „Pink TV“ and daily „Politika“.

Additionally there was an one-hour blockade of the RTS building to which the broadcaster reacted with following statement: „ This blockade crosses the border between legitimate protest and illegitimate pressure on employees of the public broadcaster.“ RTS hasn’t commented yet on the protesters‘ demands of management resignation. In January, the Director-General was supposed to retire due to grounds of age. However the council prolonged his mandate for another six months. Organisers announced further demonstrations.

Meanwhile in the EU country Croatia public service media were also criticised and on 2 March it came to first demonstrations. Compared to the neighbouring countries where the initiatives are rooted from the society and citizens, in Zagreb it was a journalists‘ protest und opposed primarily the public broadcaster „Hrvatska Radio Televizija“ (HRT).

In the last couple of years criticism against HRT increased, especially due to the appointment policy of the general management which was switched often after government change. Particularly in 2016 the dismissal of the director-general caused international outrage, after already 70 journalists and editors have been demoted or reassigned at HRT. The current demonstration was caused however by lawsuits which were filed by HRT against other media as well as their own journalists. 36 court proceedings are ongoing where HRT is suing for overall 2.227.500 Kuna (ca. 300.000 Euro)[6] for defamation and acts against HRT's honour and reputation. Lawsuits are also filed against the president of the Croatian Journalists Association (HND) Hrvoje Zovko and the president of the HND branch at HRT Sanja Mikleušević Pavić because they were criticising their employer publically. The Association is one of the main organisers of the protest and explains that the goal of these lawsuits is to intimidate and discourage journalists to write critically about the public broadcaster.

Hence, one of the main requests of the initiative „Novinarstvo ne damo“ („We aren’t giving up journalism“) is to drop the lawsuits. At the beginning this initiative consisted of 30 civil society organisations which weren’t only calling for demonstrations but also a boycott of HRT for two weeks. Opposition parties have also joined the boycott. It went so far that the MP of the Social Democratic Party (SDP) Gordan Maras kicked out a HRT crew from his press conference. A lot of people condemned this – also HND president Zovko. Maras later apologised.

In the parliament the current situation with HRT was also discussed. Civil society actors and politicians from the opposition blame the government of Prime Minister Andrej Plenković for appointing a management close to the government for this political dependence. The protest march thus passed buildings of the Ministry of Culture and the government where eight demands were left.[8]

Prime Minister Plenković reported after the protests that in Croatia media freedom exists and he’ll discuss it openly with everyone who doubts it. He condemns the lawsuits however he knows too little to judge the processes correctly. Moreover, he explained that he is not living in a country where the prime minister can demand somebody not to take legal actions. He furthermore cannot prohibit a court to pass its verdict. Considering the protest's demands the government will check possibilities to improve media policies and funding of media.

In Albania there are also regularly rallies happening. Students were starting to demonstrate against high student fees and bad housing already in last December. Furthermore, some construction projects caused unrest among citizens, e.g. a new city highway in Tirana. This led to bigger protests which were directed towards the government of Edi Rama. The situation got even worse because members of the opposition have been boycotting the parliament. Contrary to the other countries public service media hasn’t been criticised yet.

Structural issues of PSM as a cause

In conclusion Maja Kocijančič is right when she says that this is not a “Balkan Spring.” It is not a regional movement with common actors because the causes are local. However, there are similarities, as it was caused in all countries by frustration over economic and political circumstances. In the end the reasons are due to structural problems; despite being nominally democracies the formal control mechanisms are influenced by state leadership. It is apparent in all countries that laws are easily passed in parliament, the judiciary is not always working independently and public service media are often functioning as a mouthpiece for the ruling parties. These structural issues and lack of political will for reforms allow these dependencies. In the case of PSM it occurs due to the way of funding and the appointment of control bodies. Comparably small budgets and the fear of further reductions promote this dependence. It is thus understandable that the public is dissatisfied with this appropriation und demands reforms. Only independent and well financed PSM can fulfil successfully its tasks in a democracy –information, education, culture and entertainment.

It can be seen positively that citizens are recognising media freedom and independent journalism as a democratic value because in the three countries where PSM are criticised and resignations are demanded the wish for media freedom is one of most wanted requests. The KAS Media Programme South East Europe is thus reassured in its activities to improve the media situation and promote independent PSM. In the upcoming years it will intensify its glance on the current situation and developments of PSM in South East Europe and will put this topic on the agenda of many events.

[5] When Vučić was asked if he listens to the demands of the people he answered that he’ll never do it even if there are five million people protesting. In a country with 7 million inhabitants this is a surprising statement which is why the organisers named themselves “1 out of 5 million”.

[8] Overall 1160 lawsuits are filed against media and journalists in Croatia. 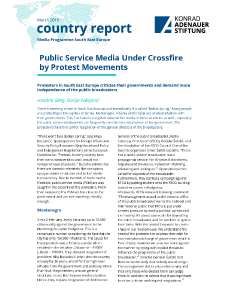