In the past years, China has continuously expanded its presence in South East Europe. China's influence in the region, however, goes beyond infrastructure and science and has gradually expanded in various areas, including the media.
December 8, 2020 Ordering Information

The study is based on qualitative research methods. Vladimir Shopov conducted more than 40 face-to-face and online interviews between September and November 2020. Interviewees included media experts, journalists, political analysts and researchers, university lecturers, diplomats, politicians and entrepreneurs. In addition, previous policy and research experiences on China by the author were also utilized.

The study shows for the first time that China has been positioning itself specifically in the media sector in South East Europe for some time. There are more and more reports about the country, which are taken directly from Chinese sources. Using different methods, China tries to publish its own themes, perspectives and narratives. These efforts are reinforced by the structural weaknesses and dependencies of the media systems in South East Europe. Even the first attempts to buy large media companies in the region could have already taken place, reports Vladimir Shopov.

The paper was presented during an online discussion on 9. December 2020, organised by KAS Media Programme South East Europe and ECFR. 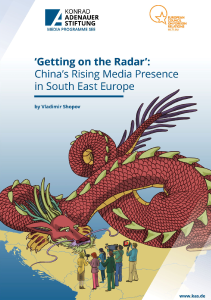 Media Policy, Freedom of the Press and Freedom of Expression China's role in the world