The UN’s Call to Climate Action

When, if not now?

On the 23rd of September 2019, the UN Climate Action Summit was held in New York with the clear statement by UN Secretary General António Guterres that the time for rhetoric is over and action is needed. Speaking slots were only allocated to countries that came up with a clear plan of action on how to tackle climate change.
October 25, 2019 Ordering Information

The overall outcome included pledges from 77 countries, ten regions, and more than 100 cities worldwide to commit to zero carbon emission by 2050, and 70 countries announced they will boost national determined contributions (NDCs)  by 2020. Additionally, 2.000 cities committed to put climate risk at the center of decision making and more than 100 leaders from the private sector committed to accelerate their move towards a green economy.

A group of the world’s largest asset owners also announced a move to carbon neutral investment portfolios by 2050. Multilateral and National Development Banks also announced an acceleration in their climate action, while all Multinational Development Banks (MLDBs) vowed, inter alia, that all their activities will align fully with the Paris Agreement and the SDGs by 2020. The International Development Finance Club also promised to mobilize 1 trillion USD in clean energy funding by 2025 for the 20 least developed countries in order to promote carbon neutrality.

Furthermore, one third of the global banking sector signed up to the Paris Agreement objectives and the SDGs. Asset Managers asked leaders to put a meaningful price on carbon, faze out fossil fuels as well as coal, and give a strong mandate to climate SDGs. Even though these pledges seem impressive on face value, the world is set to miss the target of carbon neutrality by 2050 which would limit global warming to 1.5C by the end of the century.

Pollution as the biggest problem

It becomes evident when one looks at the three biggest greenhouse gas emitting countries China, USA and India[1] (source), that these goals will not be reached. China has made no promise to take stronger climate action and will only stick to the goals set in the Paris agreement. This is likely due to its worries about its slowing economy. The USA left the Paris Agreement on June 1, 2017 under President Trump and has since rolled back climate protection legislation. This trend is especially sobering when considering that only a few years ago, the USA was a leading force on climate protection and nudged other countries, such as China, in that direction. India will increase its share of renewable energy by 2020, but has made no promise to reduce its coal dependency. They are, however, on track to stay within the greenhouse gas emission target agreed to in the Paris Agreement. It is worth mentioning in this context as well that both China and India are still establishing new fossil fuel power stations.

Raising the issue of financing a greener economy, Turkey’s President Recep Tayyip Erdoğan made it clear that Turkey will not ratify the Paris Agreement until it is reclassified as a developing country and therefore eligible to access green finance. Turkey’s use of coal is expanding faster than anywhere else in the world[2].

With the US having left the Paris Agreement a mere two years ago, it is telling that Russia ratified the Paris Agreement on the day of the UN Climate Action Summit. During the speech at the Summit, there was, however, no mention of reducing emission from the state-owned petroleum industry, which is the biggest polluter in Russia. Countries who are stalling their action to combat climate change and who are building and financing new fossil fuel power plants or neglecting their emission commitments such as the USA, Brazil, Saudi Arabia, South Africa and Japan, were not given an individual speaking slot at the summit.

The EU and Germany

Seven EU countries received individual speaking slots as well as the President of the European Council, Donald Tusk. Tusk clearly stated that the EU will exceed its 2030 climate targets. He also advocated the proposal by the EU Commission President to raise the target of emission reduction to 50% or even 55%.

This target, however, is subject to approval by all member states, and so far, a large majority of members have endorsed it. Some of the individual pledged from EU member countries were steeped in wider political issues, such as France announcing that it will not enter new trade negotiations with countries who run counter to the Paris Agreement. This was a thinly veiled jab at the US, which is already involved in difficult trade talks with the EU.

Angela Merkel, who had the fourth individual speaking slot, presented her government’s new climate package which includes a 55% cut to emissions by 2030, a 2050 carbon neutral target, as well as phasing out nuclear power by 2022 and coal power by 2038. The climate package also sets carbon pricing for sectors which are not already covered by the EU emission trading scheme. Additionally, Germany will double its financial contribution to the Green Climate Fund for developing countries, and showed also its preparedness to withhold funding to the Amazon Fund due to Brazil’s lax enforcement of environmental protection.

The climate package presented by Merkel at the UN Climate Action Summit has received criticism from the opposition and some civil society organizations for not being stringent enough. However, the coalition partners are still discussing amending the document. What is unique for Germany and will stay in the pact, as assured by Angela Merkel[3], is that there will be a monitoring mechanism for each sector to ensure that it does not produce more greenhouse gas than agreed. Should the sector overstep the maximum amount, the responsible Ministry has three months to produce a new plan to ameliorate the issue. The amount exceeding the maximum allowed amount has to be made up the following year.

Much more than just emissions -other aspects of the Summit

The UN Climate Action Summit was not only concerned with action plans and initiatives from governments; private sector and several other initiatives, especially concerning the effects of climate change on humans, featured prominently. One such initiative, which has the private sector and the United Nations World Food Program (WFP) work together is the “Hunger Map LIVE” which will be launched by the Ali Baba Group and WFP. By utilizing artificial intelligence, machine learning and data analytics, the map shows in close to real time information about the magnitude of hunger and food security in more than 90 countries. This information can be used by the WFP, the humanitarian sector and global leaders to prepare to identify negative trends early and enable better decision-making to improve response times and cut costs. Eradicating hunger, achieving food security, improving nutrition and developing sustainable agriculture falls under Goal 2 of the UN’s Sustainable Development Goals.

The video gaming industry was one of the unusual suspects to pledge to go green at the Summit. Some of the biggest names in the video games industry such as Sony Interactive Entertainment, Microsoft, and Rovio (Angry Birds), with a combined audience of 970 million players, have voluntarily committed to harness the power of their platforms to take action in response to the climate crisis. Combined, these commitments from 21 companies will result in a 30-million-ton reduction of CO2 emissions by 2030, will see millions of trees planted, new “green nudges” in game design, and improvements to energy management, packaging, and device recycling[4].

The Summit also highlighted that Climate Change action and climate protection can be used as a tool to increase security by establishing trust and cooperation in post-conflict settings. This is done through environmental peacebuilding which is a natural resource governance concept that aims to bring two or more previously adversarial parties together to collaborate over a natural resource in which each party has a stake. There are many complex pre-conditions for peacebuilding through natural resource cooperation, but crucially all parties must be actively willing to cooperate.

The Great Limpopo Transfrontier Park in Mozambique, South Africa and Zimbabwe, the Kagera Transfrontier Conservation Area in Rwanda, Tanzania and Uganda and the Cordillera del Condor Peace Park on the border of Peru and Equator are some examples of forested landscapes that have been used for environmental peacebuilding. The result of the establishment of these protected areas has been transboundary natural resource cooperation and biodiversity conservation with the co-benefit of added carbon sequestration[5].

Throughout the UN Climate Action Summit, governments and private sector representatives highlighted what they are already doing and how they are improving their performance on climate action, nudged on by civil society leaders, the Pope and the UN Secretary General Antonio Guterres to do more and to do it faster. However, one aspect was absent from all the speeches: the urgent need for a cultural shift to curb consumerism. This would incentivize companies to produce goods that will not only last one year, or until the next upgrade is available, but for a lifetime. It is also our responsibility as consumers to change our single-use, throw-away society which is not sustainable; there is a dramatic need to realize, live and teach this. 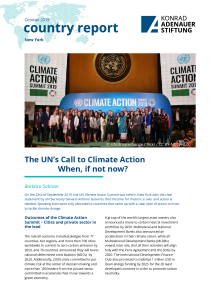