Navigating the Complex Response to Extremism

For such a complex problem as violent extremism, there is no simple solution. This became clear during a three day exchange between West African terrorist experts, representatives from the UN and other relevant think thanks in New York. It takes comprehensive responses, starting at very different levels of state and society, to tackle this problem. The experts also agreed that exclusively relying on military security approaches to terrorism does not provide long-term solutions.
May 31, 2018 Ordering Information The first meeting was with representatives of the Counter-Terrorism Committee Executive Directorate (CTED) of the UN Security Council. 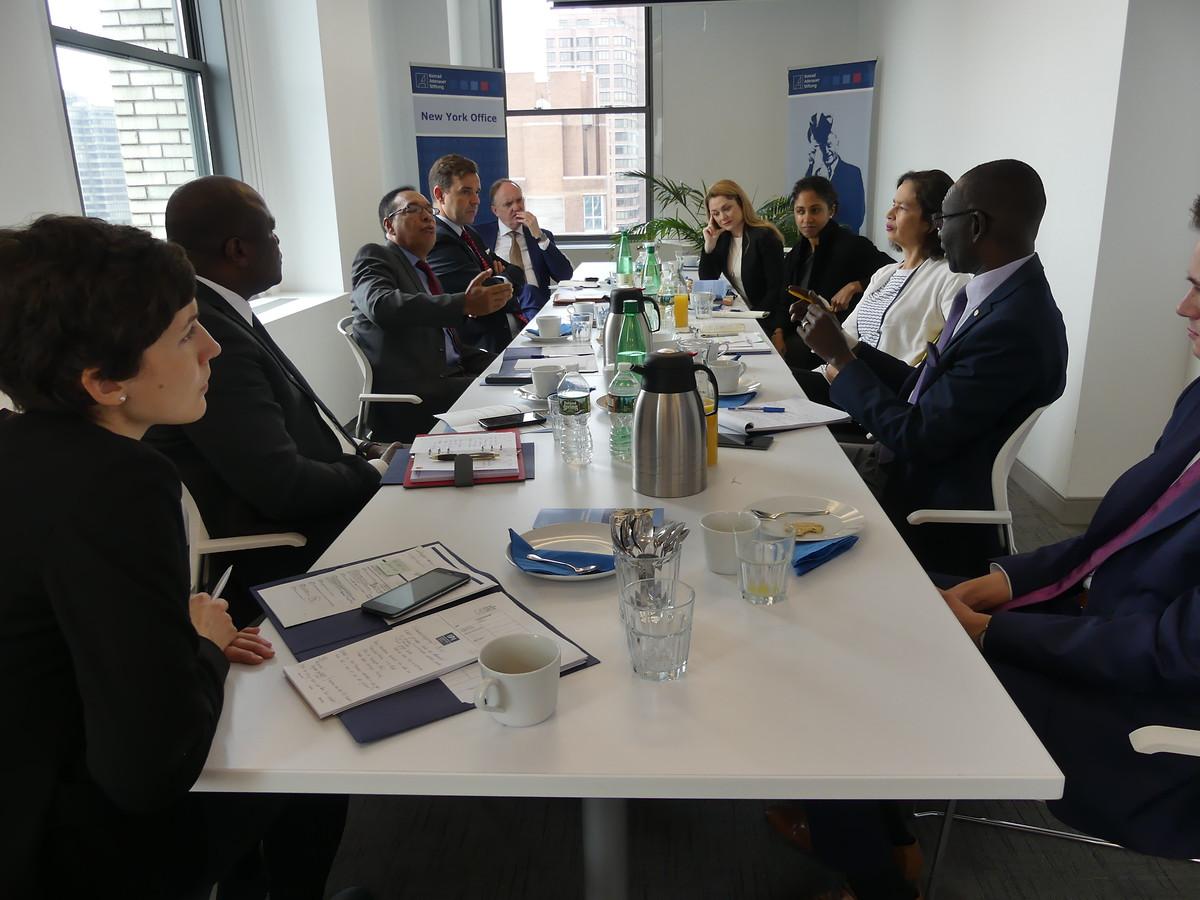 Meredith Stricker, Executive Director of The Soufan Center, spoke among others on funding opportunities for small and local organizations focused on the prevention of violent extremism. 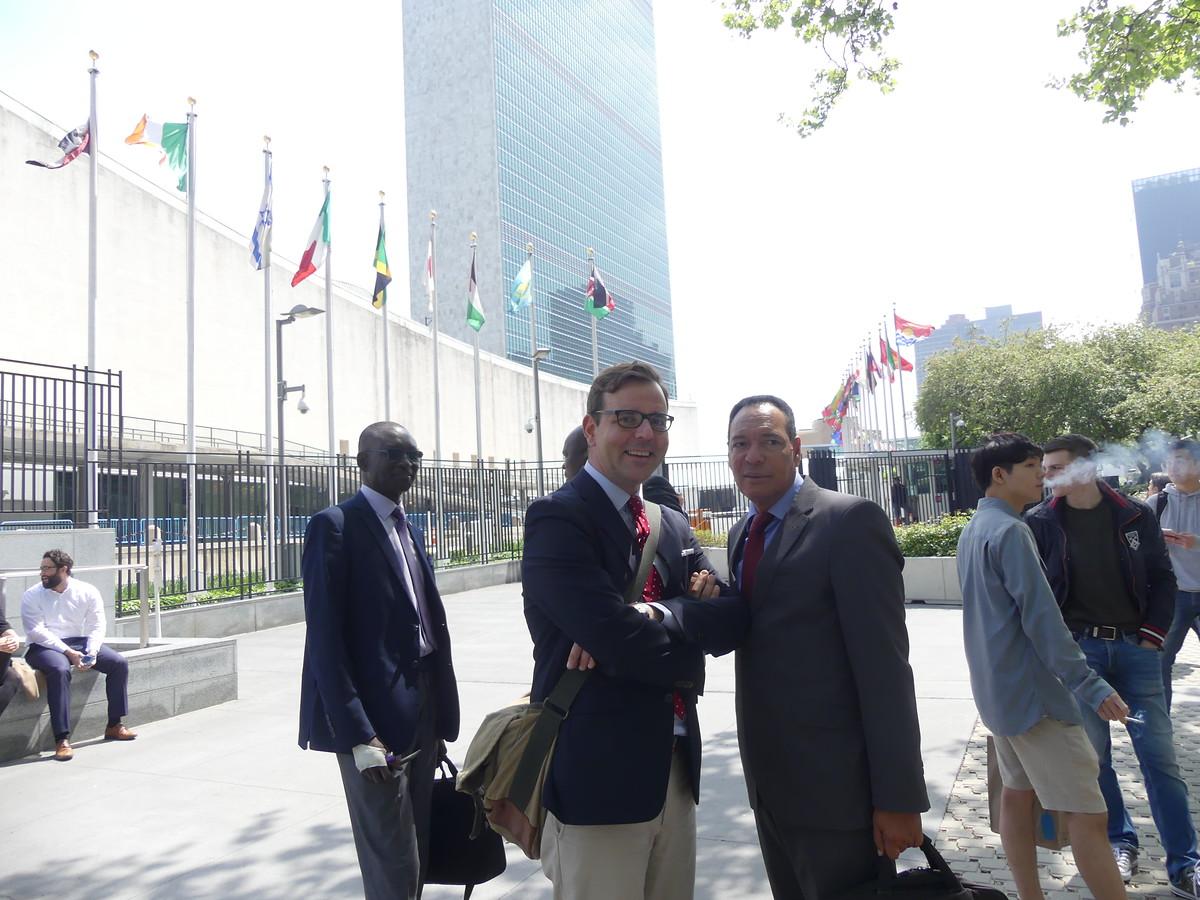 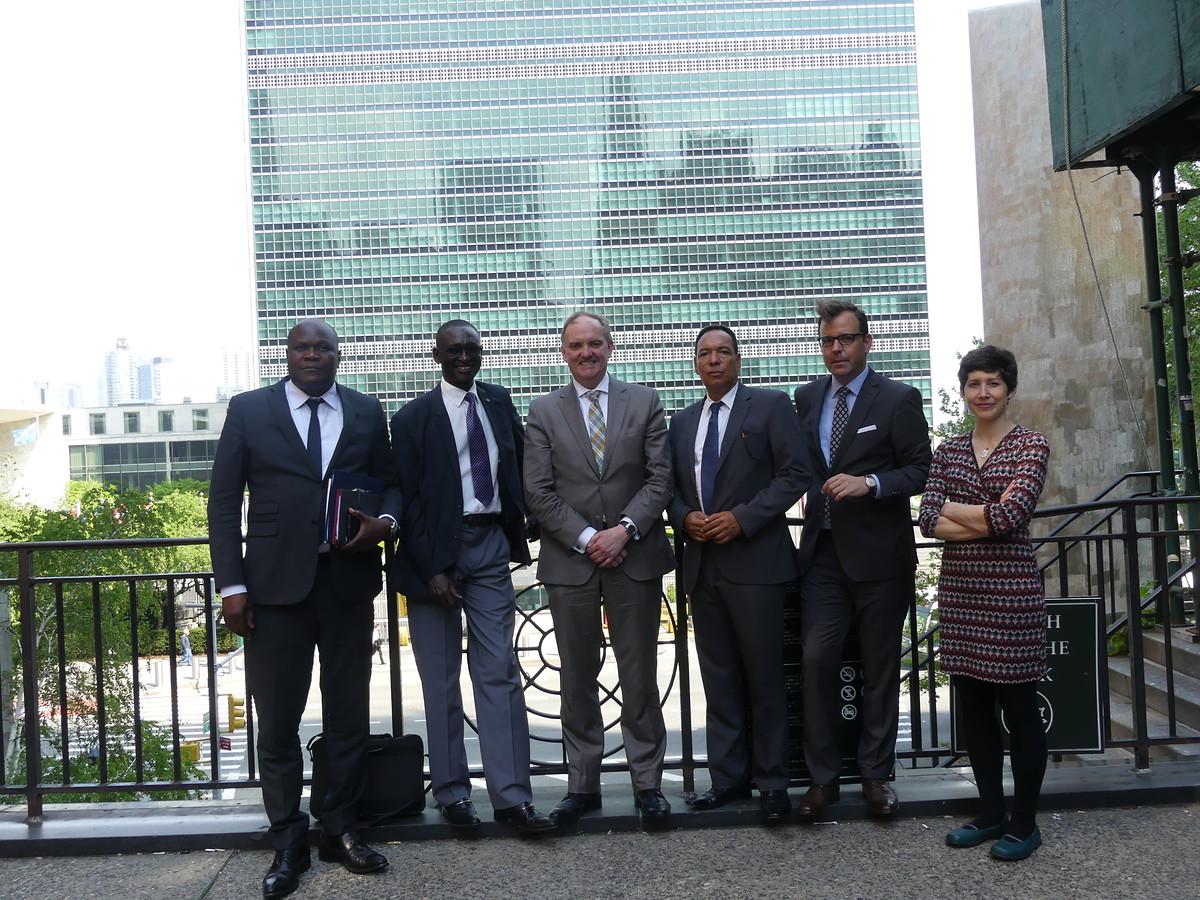 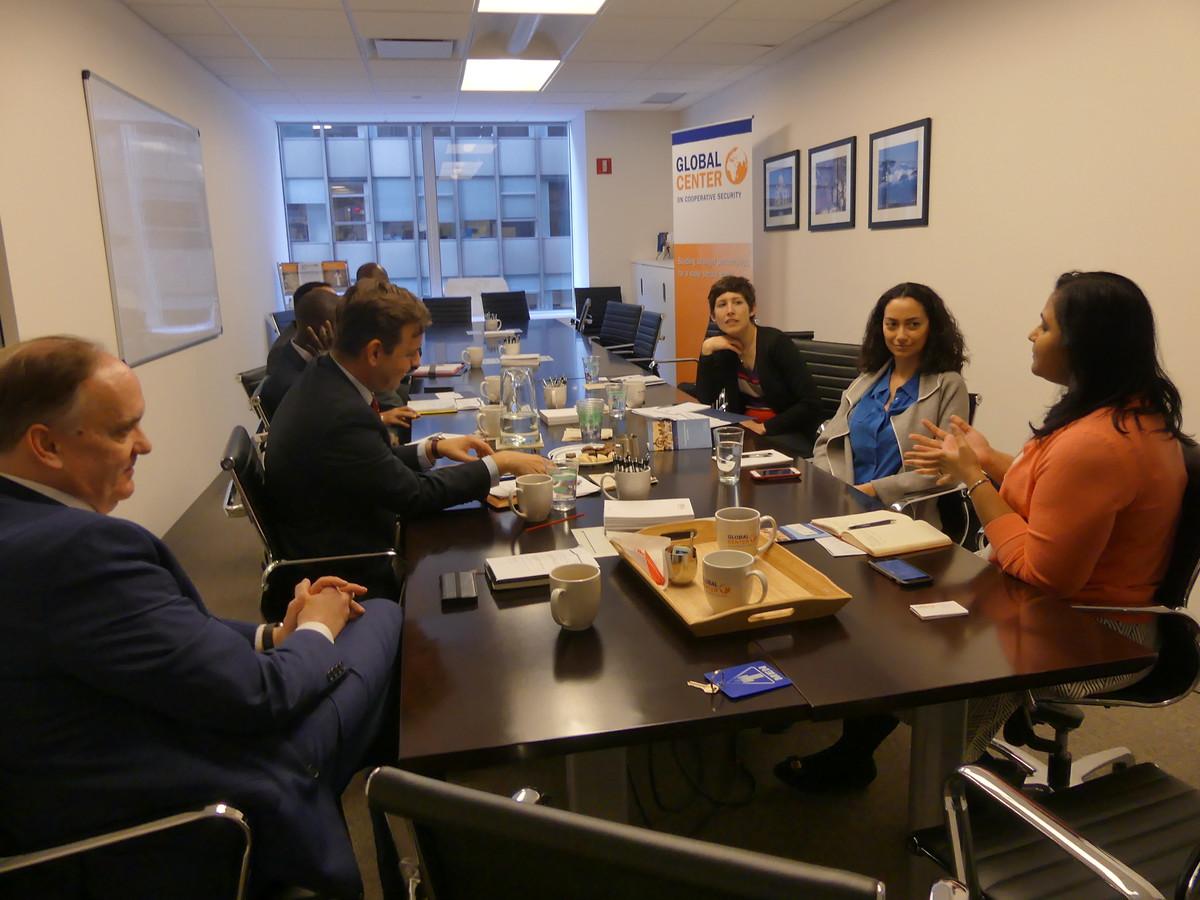 The question of the role of women in the military sparked a lively discussion with Christina Nemr, Senior Fellow, and Rafia Bhulai, Senior Program Officer, both from the Global Center on Cooperative Security. 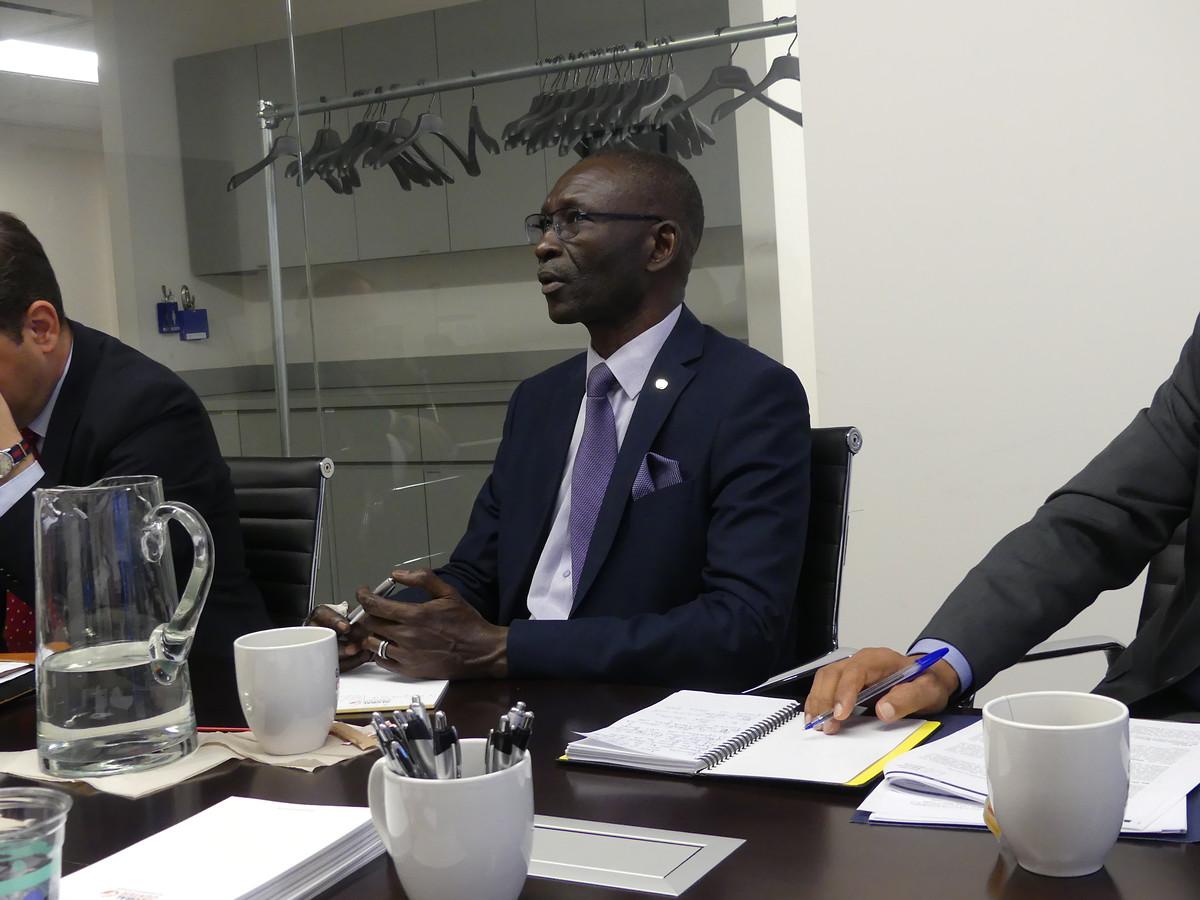 Col. (retd) Babacar Diouf, Advisor to the Director-General of the Center for Advanced Studies of Defense and Security (CHEDS) in Dakar, Senegal, Director of the Research Unit. 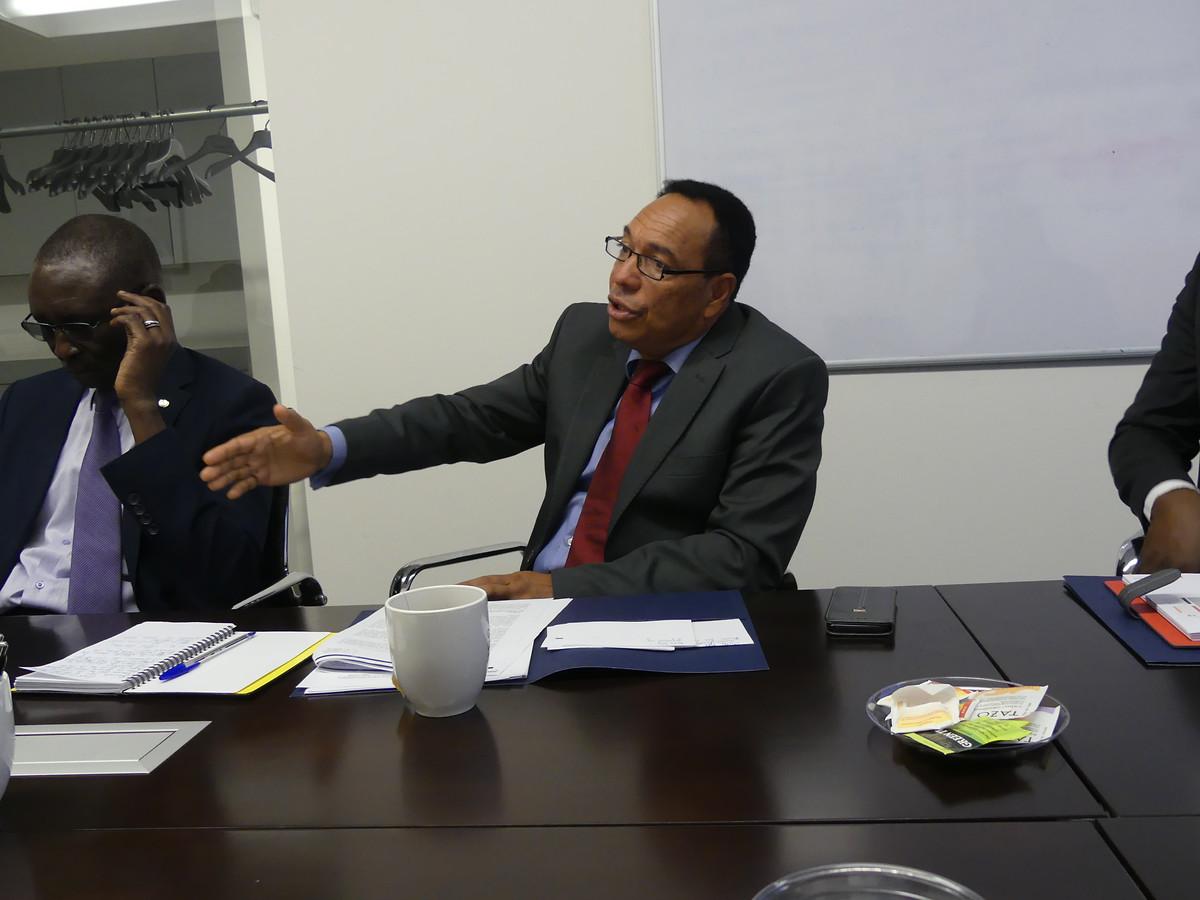 Dr. Botiagne Marc Essis, Director of the Institute for Political Science, Institute Universitaire d’Abidjan, and editor for the “Ivorian Review of Governance and Strategic Studies (RIGES).” The topic of discussion with representatives of the UN High Commission for Refugees UNHCR was the protection of refugees that are forced to leave their homes due to violent extremism and terrorism. While at the office of the UN Development Program (UNDP), Alexander Avanessov, Special Adviser on the Prevention of Violent Extremism, emphasized the importance of exchanges between his department and local actors - as in this case with the West African delegation. 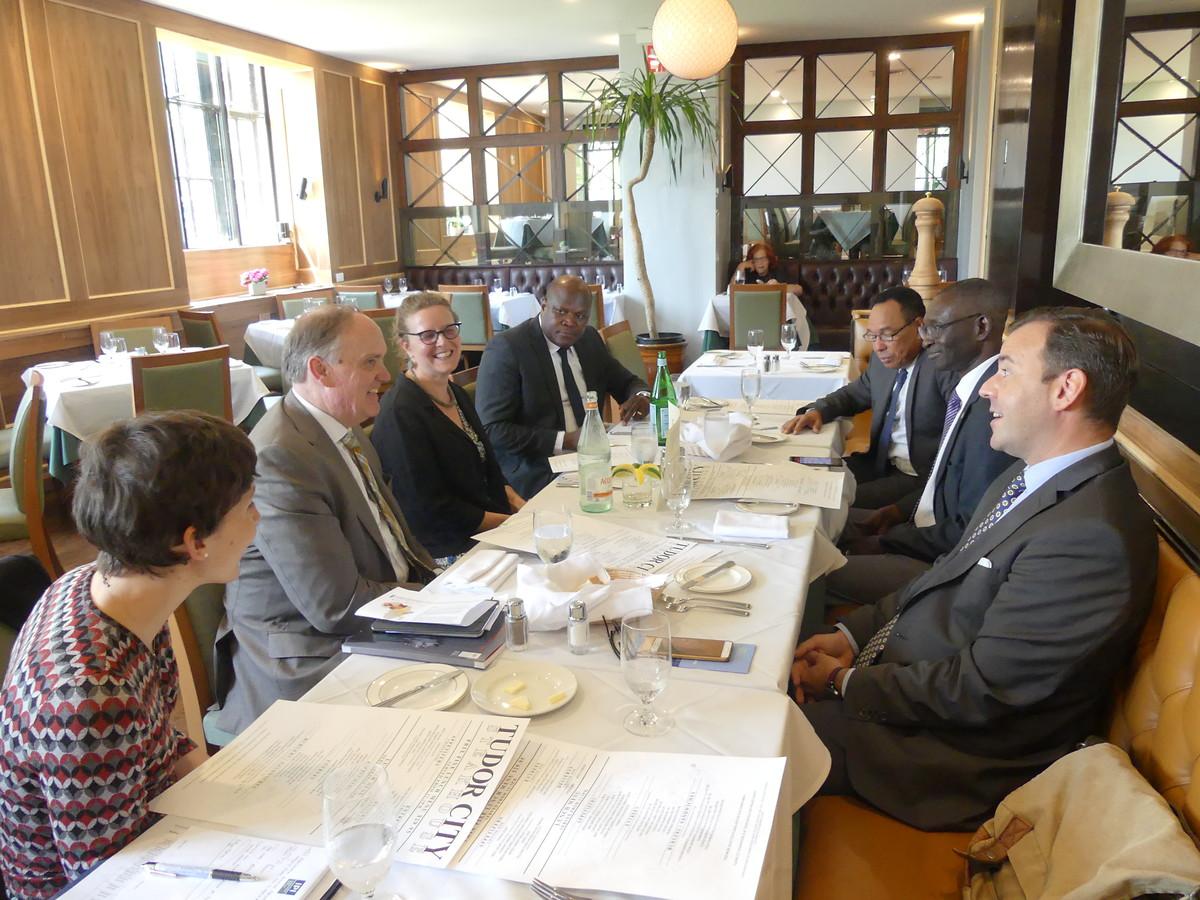 The delegation showed great interest in the work of Virginia Fortna, a professor at Columbia University, who focuses on terrorism in her research. 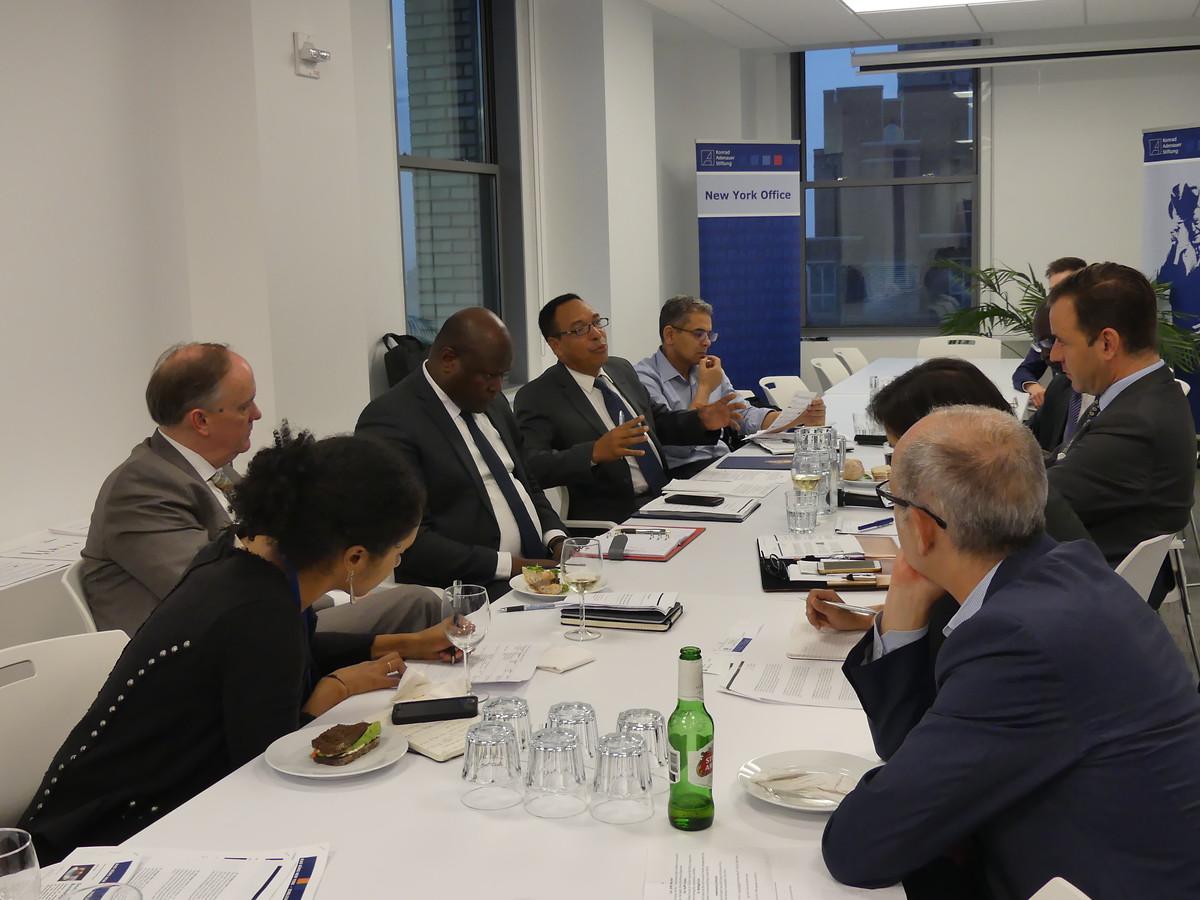 On one of the evenings, the KAS office hosted a round table on "Partners in Security Building in West Africa - UN, EU and the G5 Forces", where the delegation shared its experience and expertise with a knowledgeable audience. 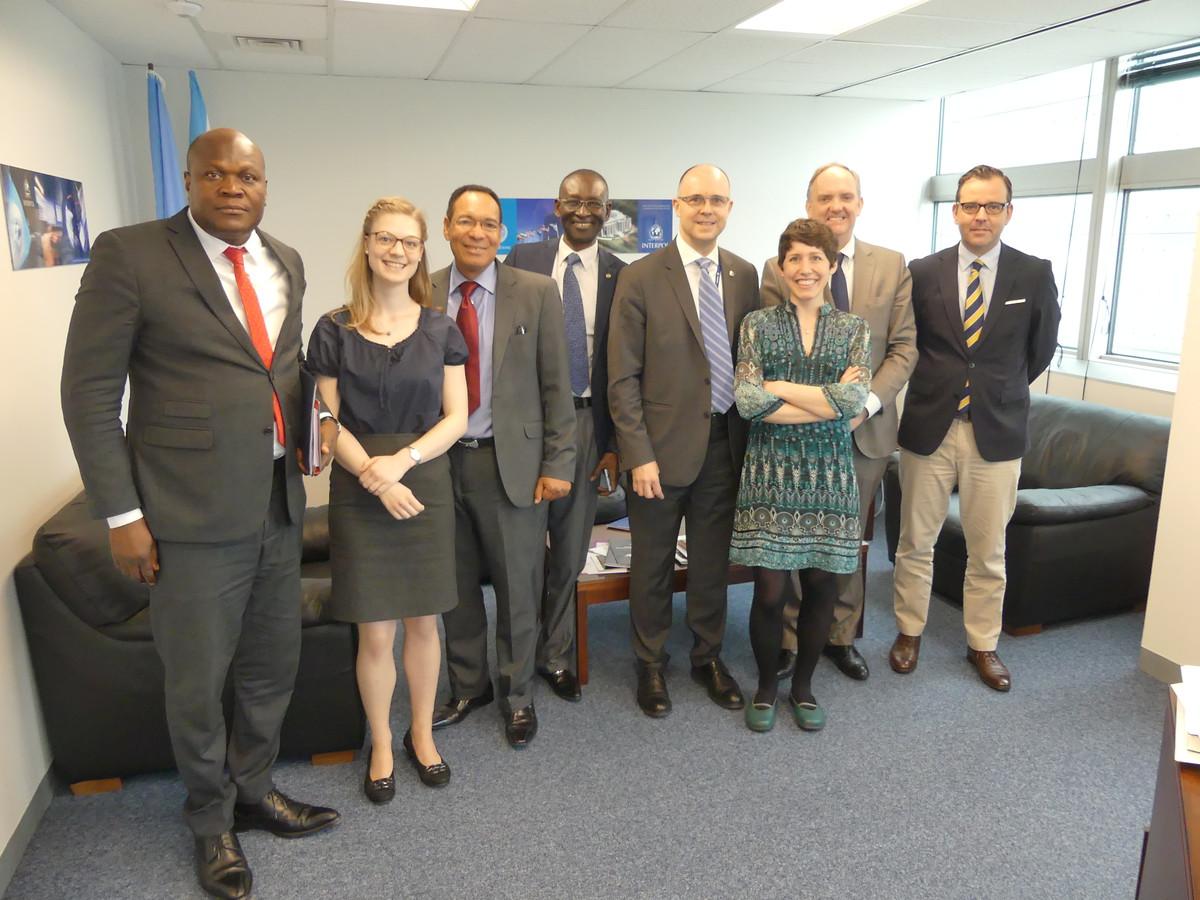 Interpol is an important international actor in the fight against terrorism. The delegation was received there by its United Nations Representative, Emmanuel Roux, and had an informative talk with a member of the Terrorist Network CT Directorate. The delegation also met with representatives of the UN Department of Political Affairs, the UN Task Force on Boko Haram, as well as experts for the Chad Basin and different countries in the region. 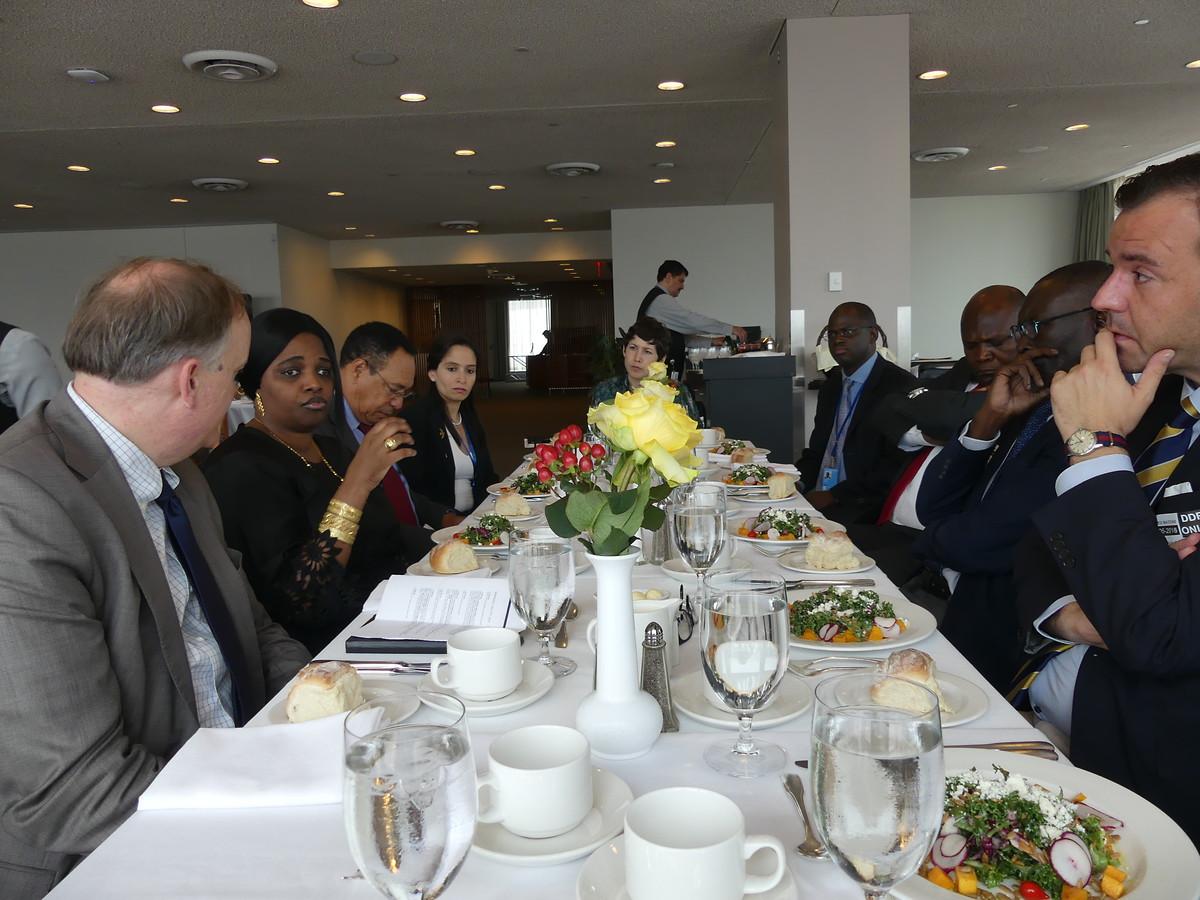 CNN journalist Paul Cruickshank, who reports regularly on terrorist activities, exchanged views with the delegation on the current trends and developments of international terrorism. 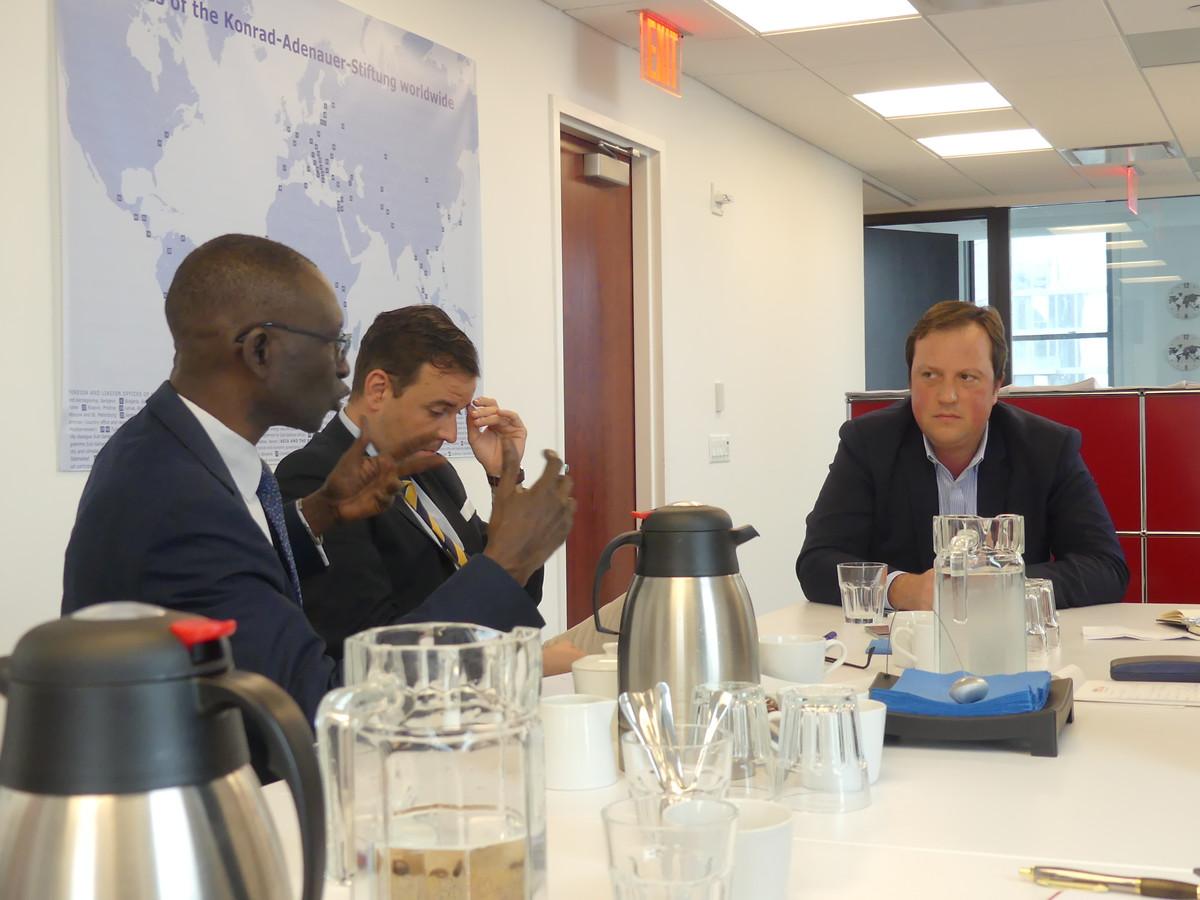 West Africa is considered one of the areas of the world where the risk of terrorism could increase in the years to come. Countries in which peace is fragile after long-lasting civil wars -such as in the Ivory Coast- offer an attractive terrain for terrorist groups. The same is true for areas characterized by tensions between different religions or any other form of conflict, as well as by poverty. Representatives of the United Nations Development Program (UNDP) confirmed furthermore during the talks that social injustices create an even more fertile breeding ground for violent extremism than poverty. According to a terrorism researcher from Columbia University, who met with the West African experts, the changes we are experiencing to the global order today are fueling the spread of terrorist groups. Enhanced cooperation and strategic partnerships in the fight against terrorism are therefore more important today than ever, as many experts agree.

The following challenges about counter-terrorism were identified during the talks with representatives of various UN organizations and think tanks in New York:

Together with the West African experts from the network of the Konrad Adenauer Foundation, recommendations were formulated for the fight against terrorism in West Africa, some of which are outlined below:Of course, where these medium- and long-term solutions are to be found and what they might look like could not be exhaustively addressed within the framework of this dialogue program. However, it became clear that in order to prevent the spread of extremism and terrorism, many different actors, from the village school to high-ranking UN staff, must work together to develop and implement comprehensive approaches. The insight gained and contacts made from this dialogue program about the work of the United Nations in the field of counter-terrorism are an important resource for the work of all participants on the ground.

More information on the dialogue program

From 13. to 16. May 2018 the following individuals participated in the „Violent Extremism as a threat to Global Security and Development: Counter strategies for Western Africa“ dialogue program launched by KAS New York in cooperation with the Sub-Saharan African Regional Security Dialogue KAS program (see more under "On Topic"):

In addition to the dialogue, there was also a discussion in the KAS office on “Partners in Security Building in West Africa- UN, EU and the G5 Forces” in which various experts from the United Nations field participated.

Partners in Security Building in West Africa - UN, EU and the G5-Forces