Dinner with Mr. Martin Jäger, State Secretary in the Federal Ministry for Economic Cooperation and Development

by Sebastian Borchmeyer
During a small gathering with German UN staff members at the KAS New York Office, State Secretary Jäger reaffirmed his ministry’s strong commitment to the United Nations system and multilateralism. No major country can benefit more from a rules-based world order than Germany.
February 1, 2019 Ordering Information 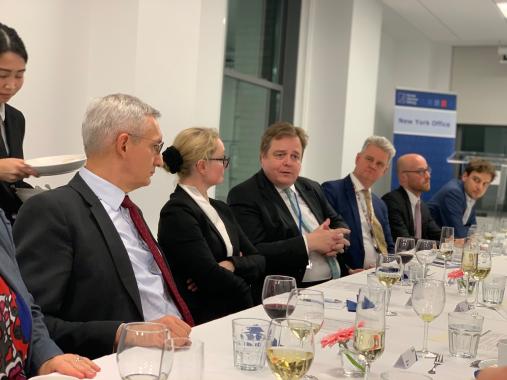 Embedding the work of the Ministry in multilateralism also becomes an objective for the pending BMZ reform process. It is already reflected in the priority for multilateral topics – especially those related to climate change, but also in the enhanced financial contributions to multilateral and regional financial institutions. The strong focus on Africa that the Ministry has developed since the last legislative period, is also reflected now in the budget. 57% of BMZ funds are dedicated to development assistance in African states.

Participants remarked how important it was that Germany acts as a role model by putting aside national interest in favor of multilateral solutions during intergovernmental negotiations, in particular at the EU level. Thus, Germany’s reputation has been growing much due to its sense of responsibility to protect the global order. Mr. Jäger praised the reform efforts of the UN Secretary-General and reassured the support of the German Government, also financially. He highlighted the current favorable leadership constellation with key actors, who not only have the right skill set and but also form a management team that works together effectively. At a time when multilateralism comes under threat, trust of member states in the United Nations and its reform processes are key. The large presence of Heads of State at the last General Assembly in 2018 therefore has been reassuring.

Multilateralism under Scrutiny. Germany's role in development policy role with the United Nations