The humanitarian catastrophe in Libya and the continued high numbers of migrants leaving its coast on course to Europe was the main topic of a cross-regional dialogue program between the KAS Regional Program South Mediterranean, based in Tunis, and the KAS Office Rome.
February 15, 2018 Ordering Information 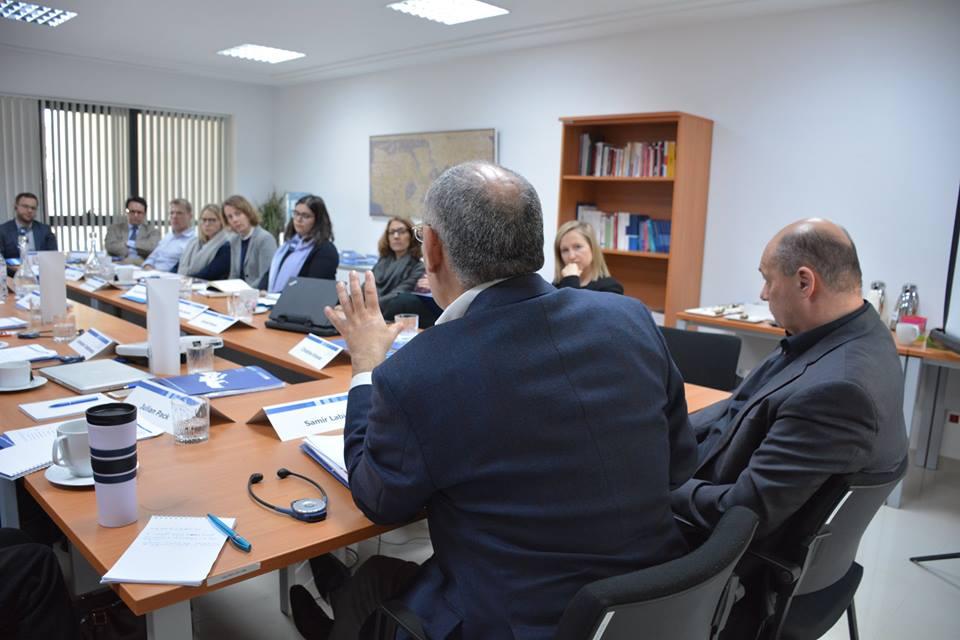 Representatives of Doctors Without Borders (MSF) talk about their work in Libya, the conditions in migrant and refugee detention centers and humanitarian rescue operations in the Mediterranean. 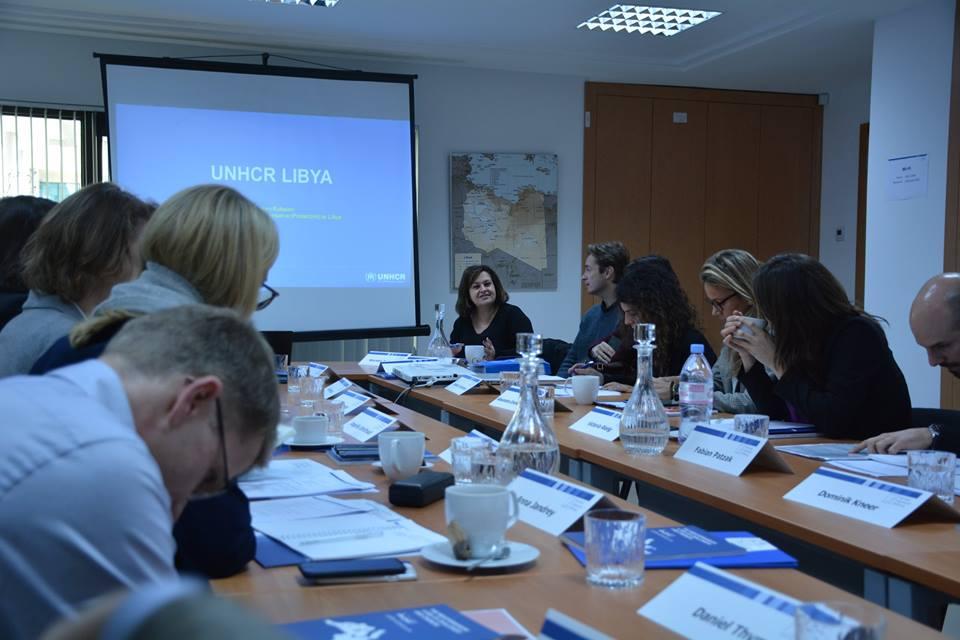 The delegates discuss the current situation in Libya and the possibilities of the European Union and its member states to take action. 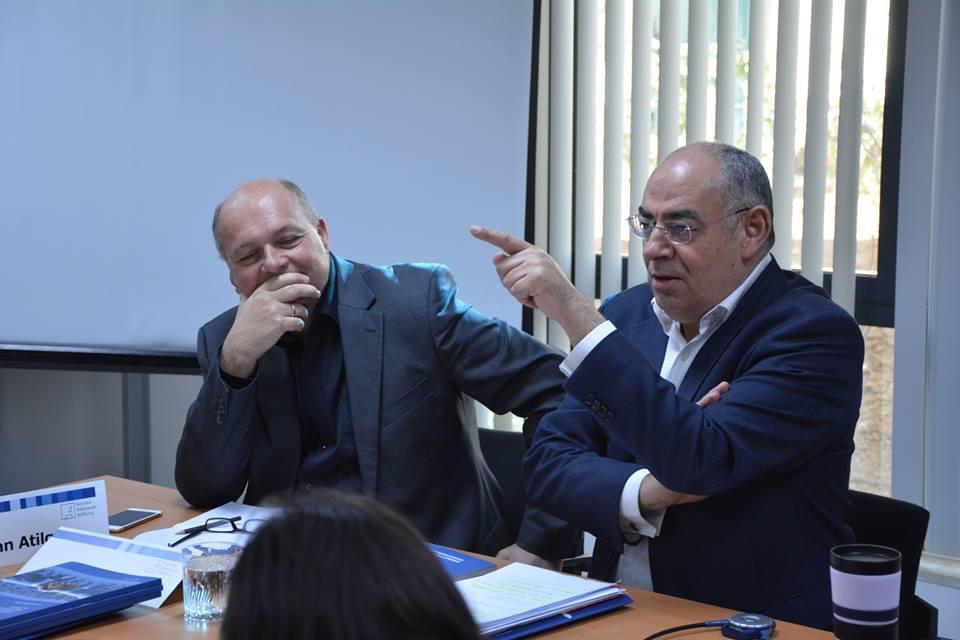 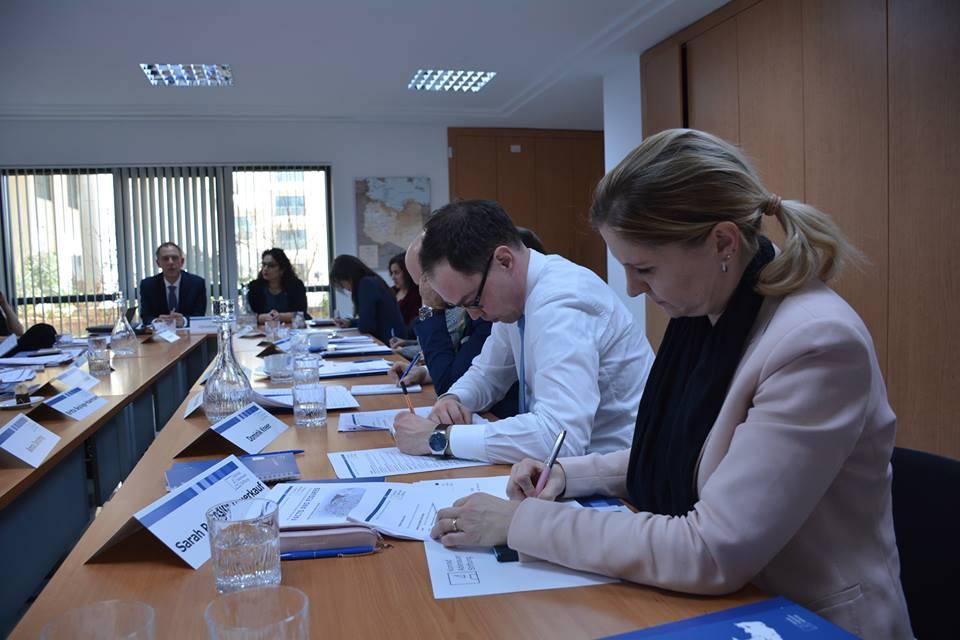 Nisreen Rubaian and Julian Pack from UNHCR Libya during their presentation on the work of the UN Refugee Agency in Libya. Matilda Bogner, Head of the Human Rights, Transitional Justice and Rule of Law Division at the UN Support Mission in Libya (UNSMIL) Members of the delegation of the dialogue program in Tunis Ambassador Bettina Muscheidt, Head of the EU Delegation to Libya, meets the delegation for an informal background discussion. In Rome, the delegation is received at the Italian Ministry of the Interior. Delegates discussed, i.a. with Mario Morcone, Prefect in the Italian Ministry of the Interior. Other bilateral meetings in Rome included a visit to the Municipality of Sant'Egidio,

a visit to the Italian Ministry of Foreign Affairs,

and discussions with German liaison officers in the Italian ministries.

Ferruccio Pastore, Director of the International and European Research Forum on Migration participated as a participant in Rome.

In view of the humanitarian situation in Libya and on the Central Mediterranean as well as the continued high numbers of migrants trapped in the country or attempting to cross the central Mediterranean towards Europe, the KAS Regional Program South Mediterranean in cooperation with the KAS Department for Migration and Refugees and the KAS Office in Italy invited a delegation of European migration experts from 5 to 9 February to Tunis and Rome. As part of the four-day dialogue program, a 17-member delegation of representatives of German and European ministries, think tanks and scientific institutions held bilateral discussions with experts from governmental institutions, UN agencies and non-governmental organizations on the current situation in Libya and developments concerning migration across the Mediterranean as well as the state of reception and distribution of migrants and asylum-seekers in mainland Europe. Dividing the program into a North Africa and a European component made it possible to trace the transnational migration routes from sub-Saharan Africa through Libya to Europe in order to facilitate a deeper understanding of the conditions, challenges and trends of irregular migration along the central Mediterranean route.

Over the course of the ongoing migration and refugee debate in Europe, Libya has come back to European and German public attention. The country, itself suffering from a precarious economic situation, a lack of state structures, and the spread of armed and terrorist groups, has turned into the main transit country for migrants and refugees leaving Africa towards Europe under life-threatening conditions via the central Mediterranean route. The number of migrants currently in Libya is unknown; estimates vary between 300,000 and 1.1 million. Many are detained in detention centers under inhumane conditions and without any legal basis. Humanitarian organizations and the United Nations have limited access to the sites.

In Tunis, the delegation held talks with representatives of the International Organization for Migration (IOM), the United Nations High Commission for Refugees (UNHCR), the UN Support Mission in Libya (UNSMIL), the EU Border Assistance Mission in Libya (EUBAM), a former Tunisian minister, the German Ambassador as well as the Head of the EU Delegation to Libya. The discussions provided a comprehensive picture of the current political and humanitarian situation in the country and the impact of prolonged political instability on regional security and migration routes originating from sub-Saharan Africa. Particular attention was paid to the catastrophic conditions in the countless official and unofficial detention centers holding arrested migrants and refugees around the country. Representatives of Doctors without Borders outlined the practical challenges of their work on the Mediterranean as well as in detention facilities and depicted the risks of humanitarian rescue in volatile conflict situations, such as off the Libyan coast.

In Rome, the delegation's perspective shifted towards a European approach to migration and refugee movements from the countries of the south Mediterranean. In talks with representatives of the Italian interior and foreign ministries, speakers of religious civil society organizations active in refugee work such as the Sovereign Order of Malta and the Community of Sant'Egidio, Italian and German migration experts and German liaison officers from the Federal Ministry of the Interior, the Federal Police and the Federal Office for Migration and Refugees, the delegation was able to gain insights into the reception and integration of migrants and asylum seekers at the local level in Italy. Delegates were briefed on the setting up of so-called humanitarian corridors and discussed bilateral and multilateral cooperation efforts of European institutions and governments on issues of migration.

The socially and politically fragmented nature of Libya as an area of limited statehood lacking a universally recognized government exercising effective control over the vast array of violent non-state actors in the country as a partner to Europe leaves European leaders with a de facto inability to act, in particular with regard to migration management. Against the backdrop of the inflationary spread of armed groups and their active participation in the burgeoning business models of people smuggling and the establishment of unofficial detention camps for refugees and asylum seekers, an effective handling of migration flows inside Libya and a prioritization of migration on the part of Libyan actors seems a long way off.

In order to prevent human rights abuses in the detention camps under the dislocated Directorate General for Combating Illegal Migration (DCIM) and through the controversial Coast Guard supported by the EU and Italy, efforts must be made to accelerate the stabilization process in Libya with sustainable state formation being the number one priority. The multiple interests of players in the ‘Libyan game’ and the convoluted political environment in the country prevent any coordinated action with Libyan counterparts tackling the challenges of migration. The documented inhumane conditions in detention centers and reported crimes against refugees and migrants in Libya continue to increase the urgency of a coherent approach on the part of the EU.

While the prospects for an early stabilization of Libya are hardly improving, the difficulties of the European countries of arrival, mainly Italy, persist. From an Italian point of view, in addition to a common strategy to strengthen the fight against human smuggling on the Mediterranean while respecting the norms and values dictated by international law, a clear commitment to a sharing of the responsibility for vulnerable migrants and refugees coming to European shores is needed. Support for African partner countries to deal with intra-African migration issues and the need to open up legal immigration pathways to Europe must go hand in hand with a revival and a strengthening of the European institutions. Migration as a transnational and cross-regional issue calls for cooperative, European solutions.

The different perspectives of the bilateral meeting partners as well as the knowledge of the delegation participants representing different disciplines and professions made a significant contribution to a better understanding of the conditions and realities along the Central Mediterranean migration route - from the countries of sub-Sahara African to the transit country Libya and through the life-threatening crossing by sea into the local host communities Europe. The discussions emphasized in particular the urgent need for action for international and European actors.