by Katharina Naumann
Five weeks ago, Germany has decided. The CDU stayed the strongest party. But on 24 September 2017, the people´s parties had convinced less voters than expected, whereas the so called “race for the third place” was won by the AfD, a euro critical and right wing populist party, which has not even been in existence five years ago. It had gained more votes than the liberals, the greens and the leftist party, who all still made it into parliament.
November 2, 2017 Ordering Information 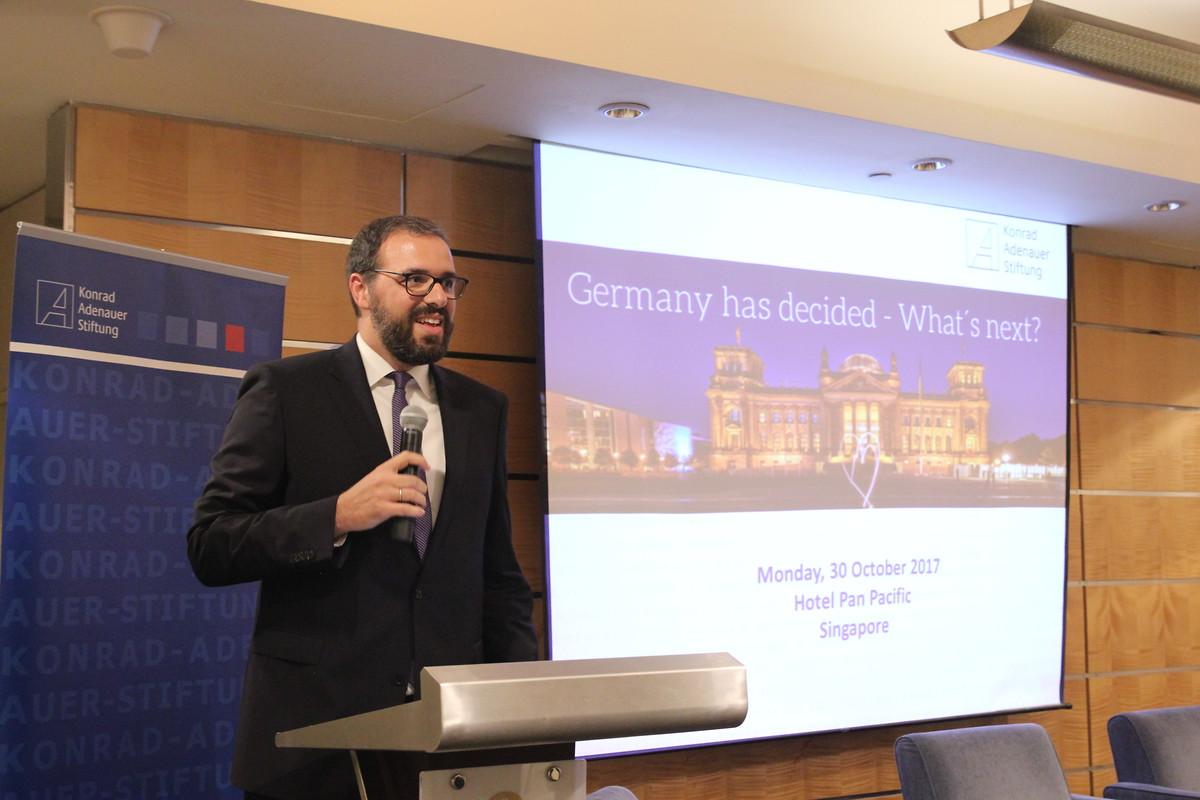 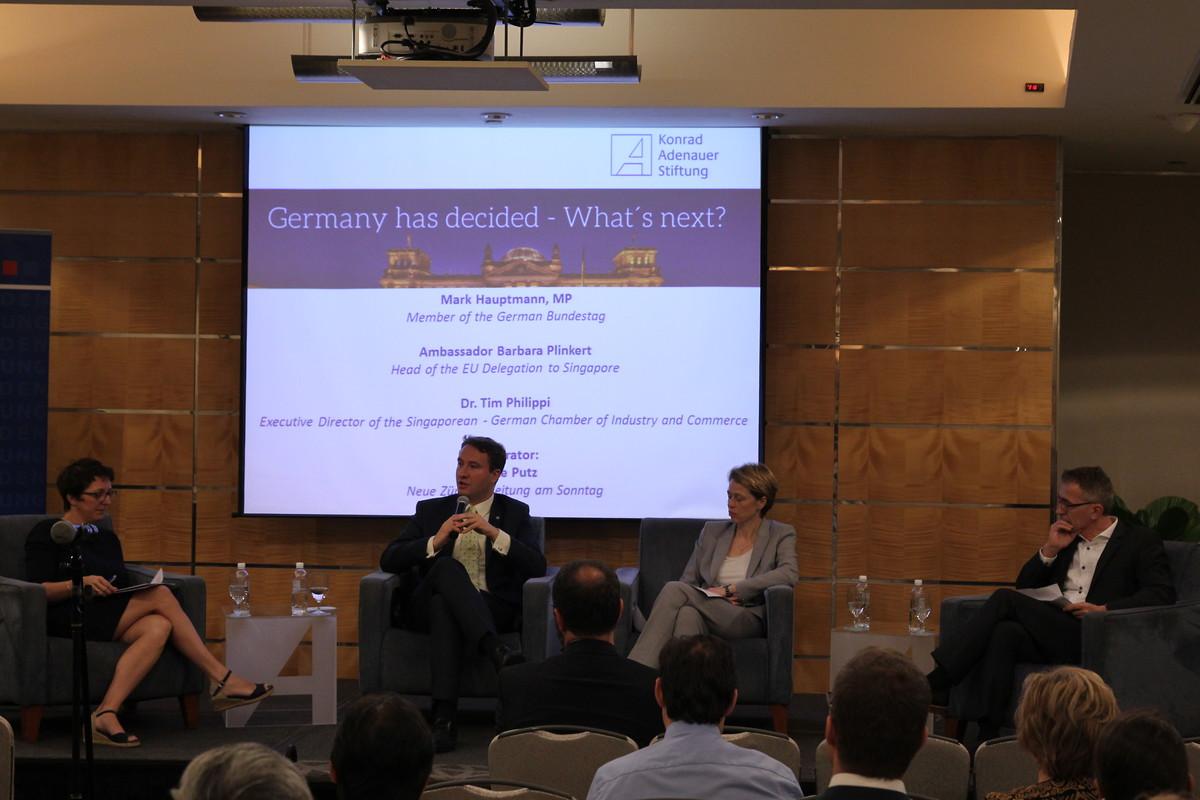 What´s next? The panel discussing future policies for the new Bundestag 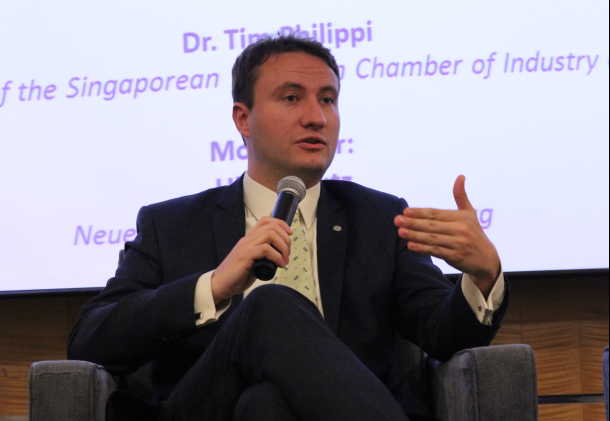 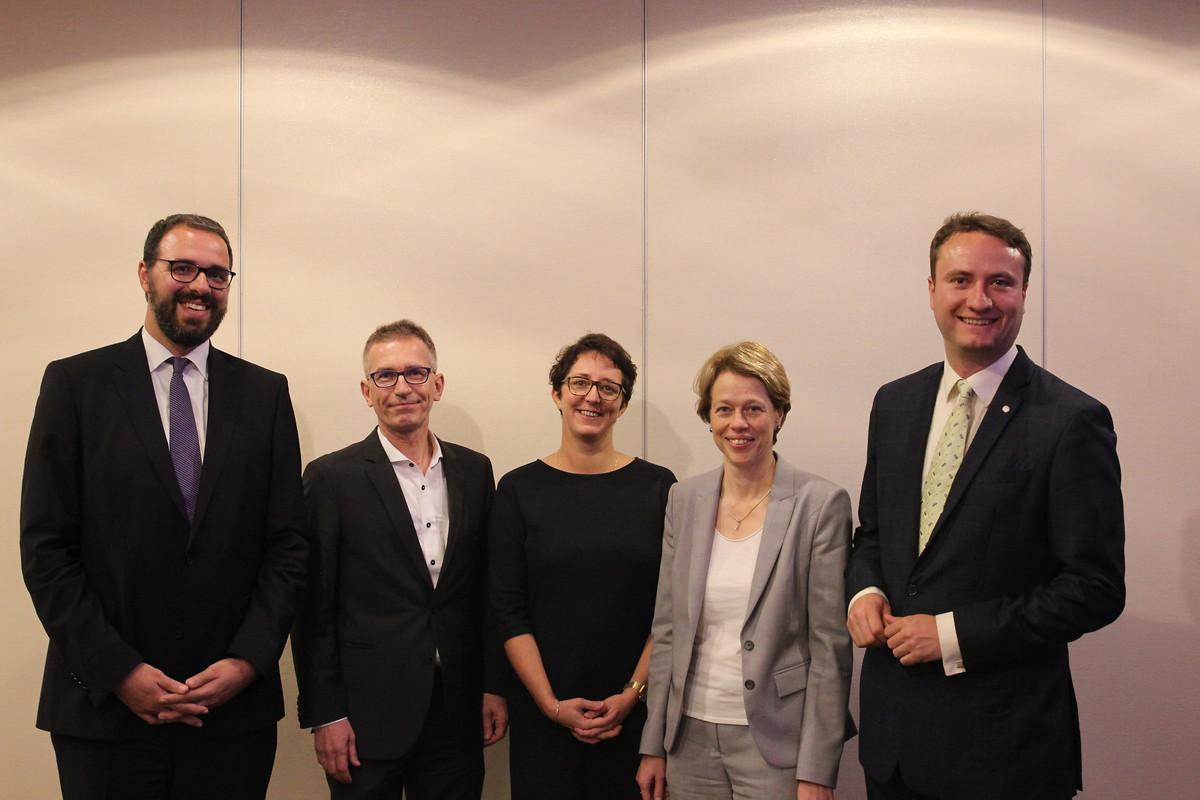 Thus, the Germans will find themselves to be in a very different political situation than what they had used to be in: The political competition has widened and for the first time in 60 years, the new German Bundestag has six factions, ranging from far-left to far-right. For the first time since the establishment of the Maastricht Treaty in 1993, a party with a clearly euro critical profile has entered the parliament. Also for the first time, the parliament has more than 700 MPs. It will be the world´s biggest democratic lower house of parliament for a single country, posing a serious challenge to the interior designers of the Bundestag´s plenary hall as well as the Parliaments administration in general. And lastly but most importantly: Angela Merkel´s CDU/CSU has entered unchartered territory with the start of negotiations toward the first-ever coalition between conservatives, the Free Democrats (FDP) and the Greens on a national level. Nicknamed a Jamaica coalition because the party colors correspond to those of the Jamaican flag, it won´t be easy to forge a stable alliance. Given all these firsts a valid question remains: What’s next?

To answer this question, KAS Political Dialogue Asia has invited three speakers to the panel discussion „Germany has decided – What´s next?“: Member of the German Bundestag Mark Hauptmann, Ambassador Barbara Plinkert, Head of the EU Delegation to Singapore, and Dr. Tim Philippi, the Executive Director of the Singaporean - German Chamber of Industry and Commerce.

Mark Hauptmann pointed out that this year the voters did not vote based on their economic situation. With topics like immigration and the state of the social welfare system it was rather a gut decision. Looking at the political landscape of Germany we can see a shift from the left to the right radical spectrum while the centrist parties are losing popularity. Hauptmann stated that is was thus important not to grant too much attention to deliberate provocations but to focus on policies tackling the people´s fears and dealing with challenges like immigration or terrorist attacks.

From the perspective of the European Union, Germany is now only one among several EU countries where EU-sceptical parties are powerful. But despite Brexit and the rise of populist parties, the member states have committed to strengthen the EU and with 2% annual growth and declining youth poverty the EU is on a path of recovery. Ambassador Barbara Plinkert, stated that the EU has to put an emphasis on reaching out to its citizens and to communicate its successes more clearly. The new German government now has to form a position on propositions that have been put forward like an EU Minister for Finance or a common Eurozone budget.

Dr. Tim Philippi, Executive Director of the Singaporean-German Chamber of Industry and Commerce, highlighted four chores for the new government in order to create a right framework for businesses to grow and be competitive: reducing bureaucracy, advancing digitalisation, enhance transport infrastructure, and allow flexible arrangements to bring family and career together through better childcare and flexibility in work laws.