by Patrick Rüppel
On 6-7 March 2014, the regional programme Political Dialogue with Asia of the Konrad-Adenauer-Stiftung Singapore, in cooperation with the Cambodian Institute for Cooperation and Peace, organized a conference on “Addressing Irregular Migration and Human Trafficking in Europe and Asia” in Phnom Penh / Cambodia.
March 7, 2014 Ordering Information 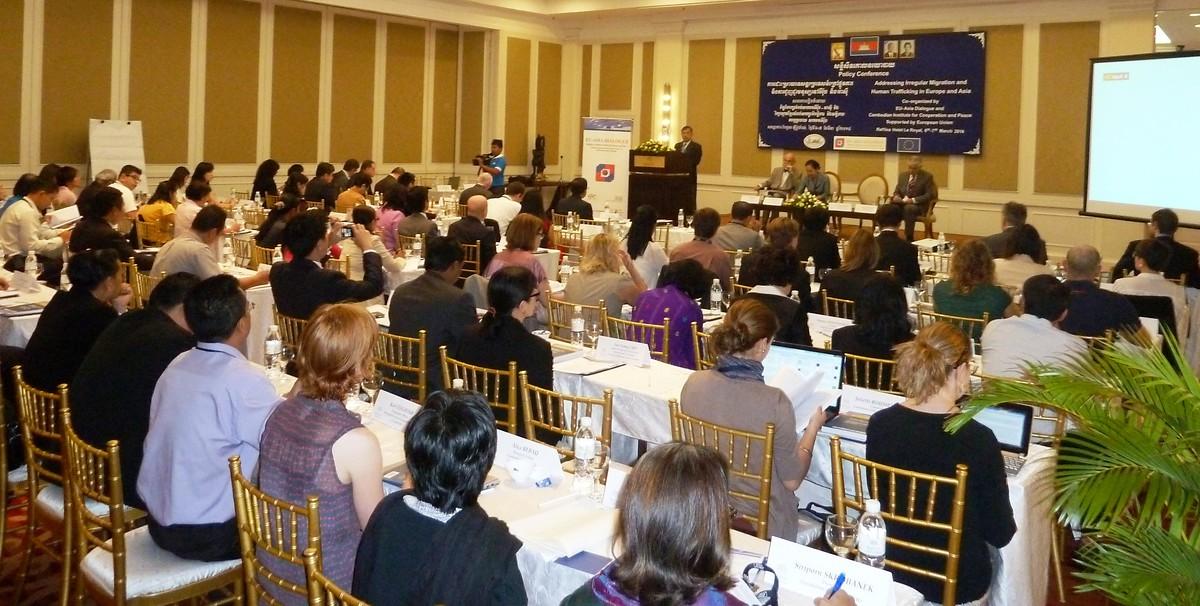 Eigenes Bild
Participants at the conference in Phnom Penh 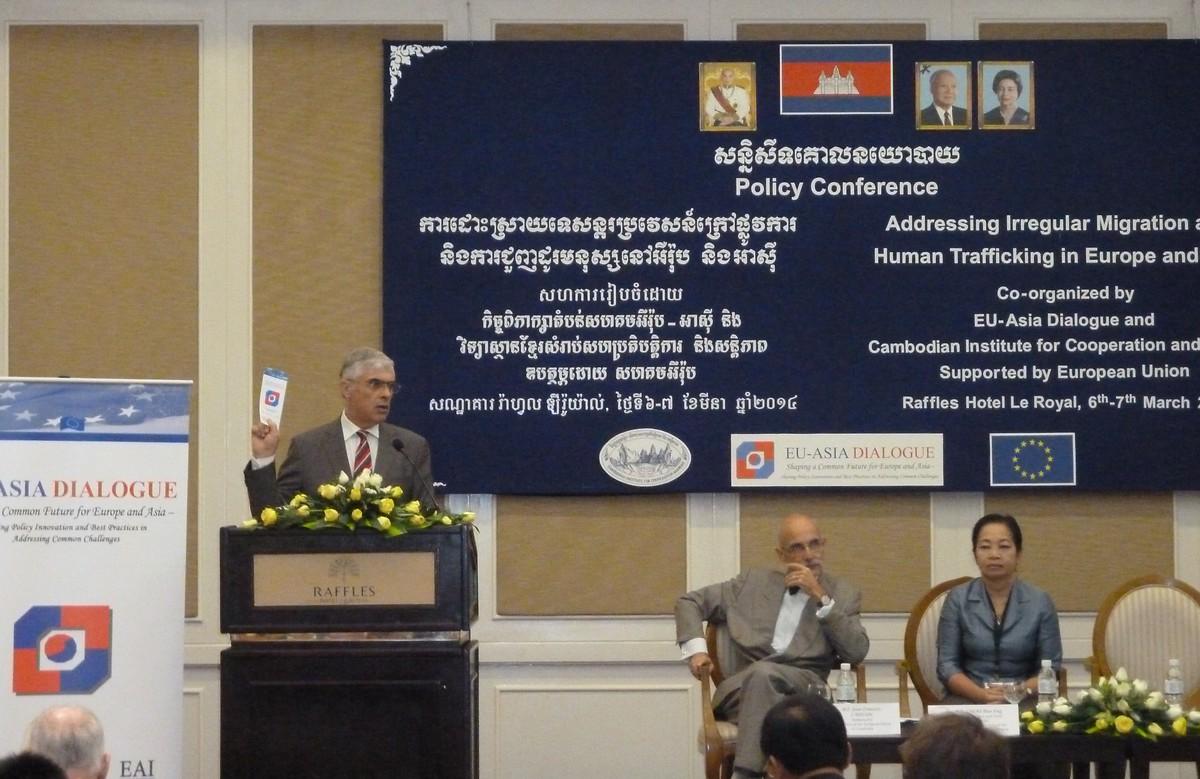 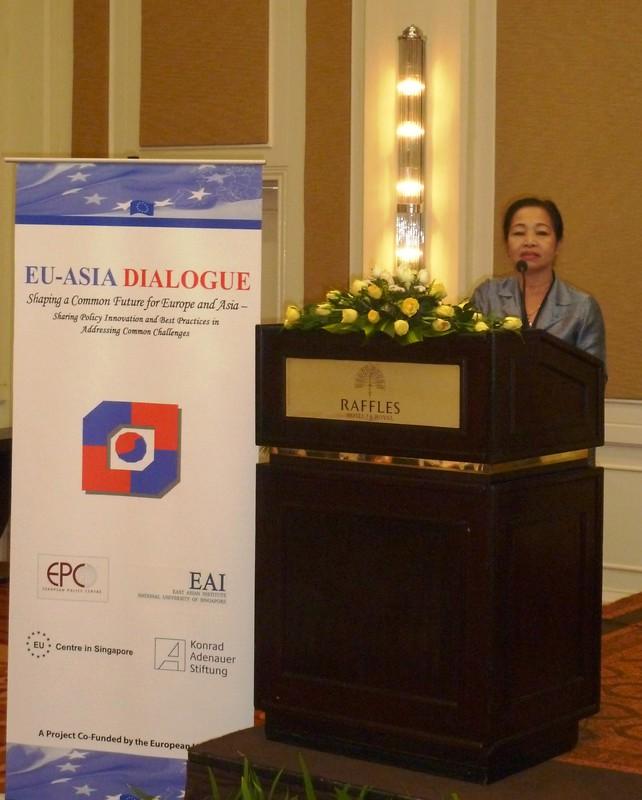 Eigenes Bild
H.E. Mrs. Chou Bun Eng (Secretary of State and Chair of The Secretariat of the National Committee to Lead the Suppression of Human Trafficking, Smuggling and Labor Exploitation and Sexual Exploitation in Women and Children, Ministry of the Interior, Cambodia) was the keynote speaker of the conference 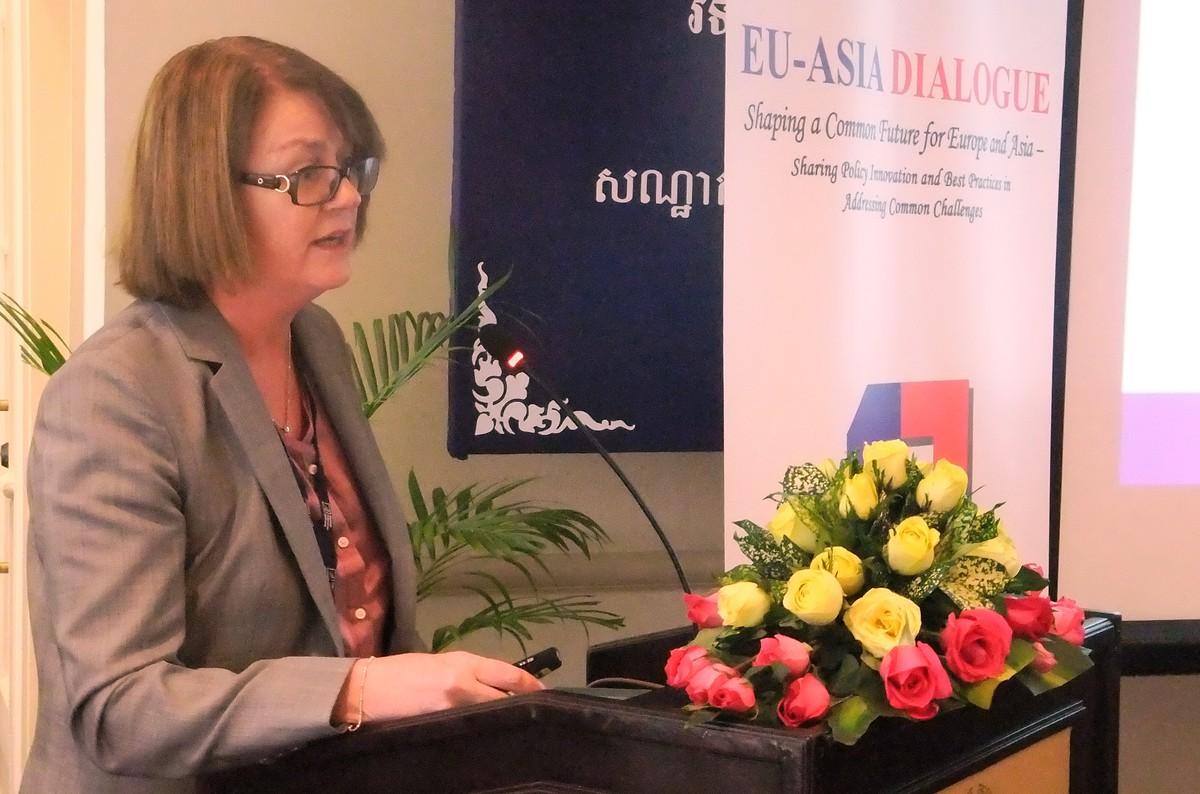 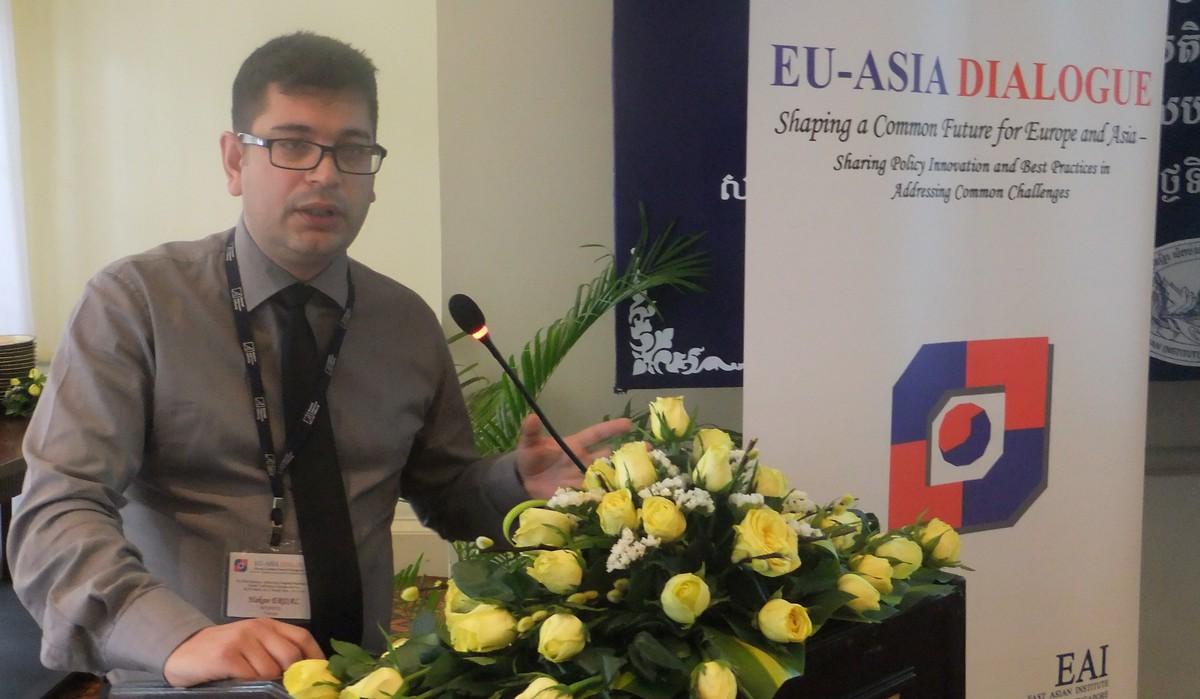 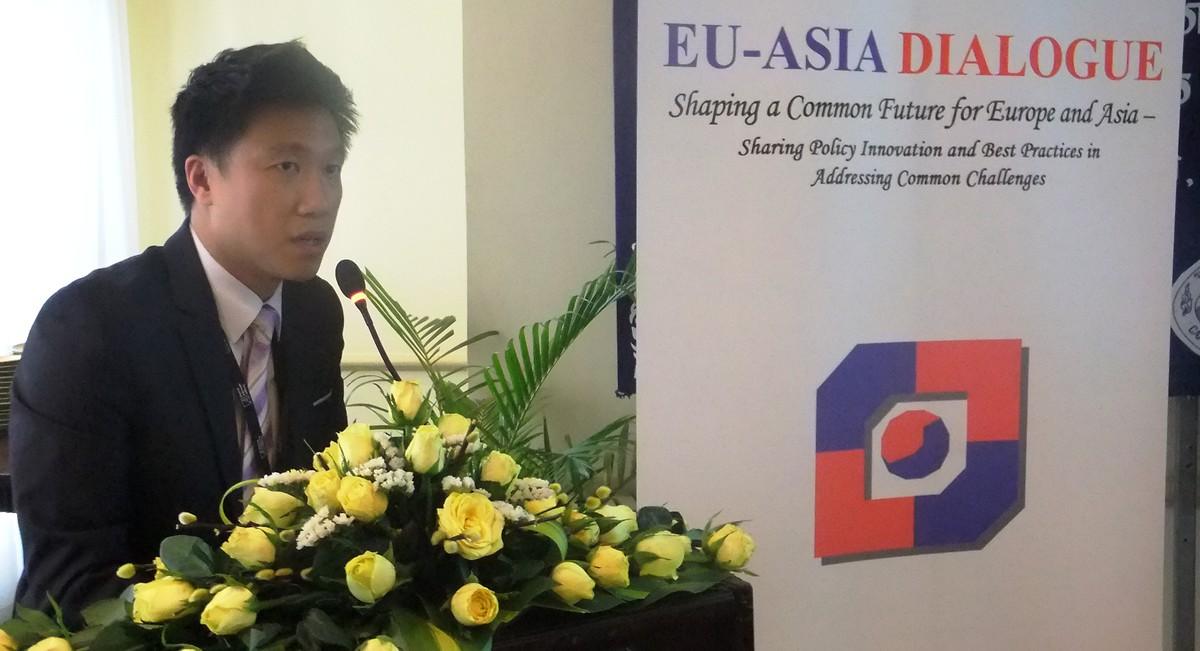 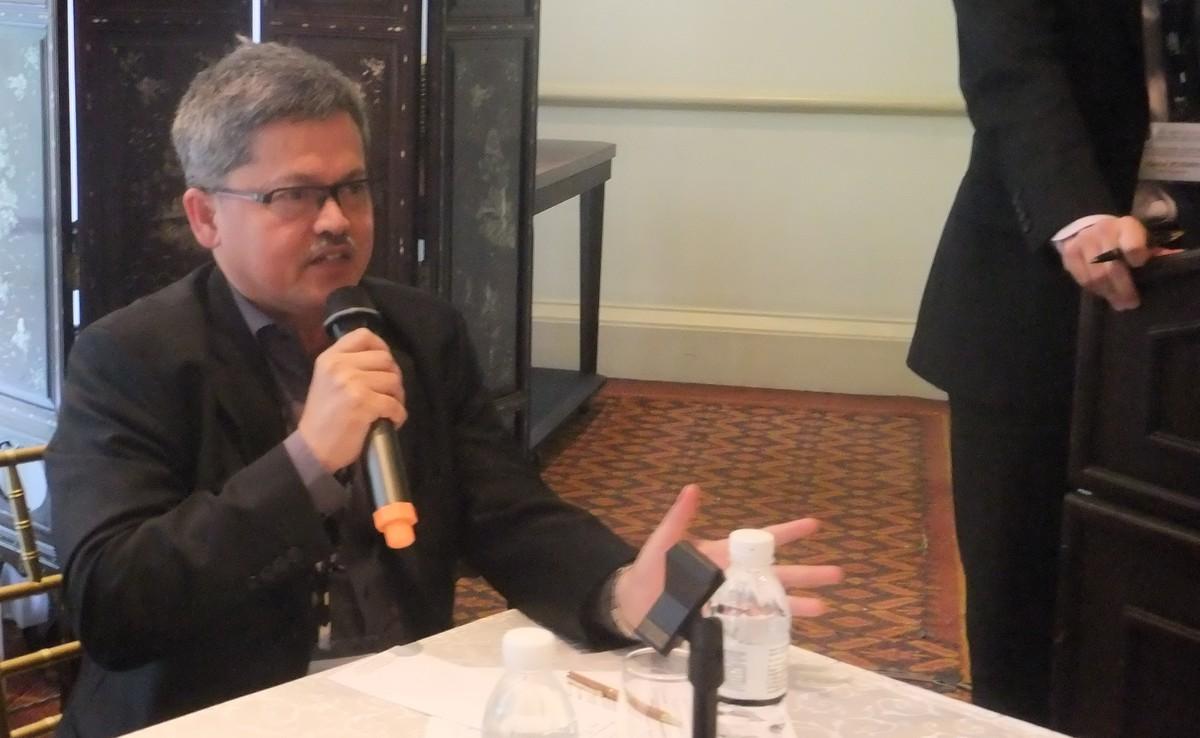 The key note speech of this event was delivered by H.E. Mrs. Chou Bun Eng, Secretary of State and Chair of The Secretariat of the National Committee to Lead the Suppression of Human Trafficking, Smuggling and Labor Exploitation and Sexual Exploitation in Women and Children, Ministry of the Interior, Cambodia. This event is part of the EU-Asia Dialogue, a project co-funded by the European Union. In total, 89 people attended the conference.

Chou emphasized that an efficient management of irregular migration and the combat against trafficking in human beings have to address the whole circle of migration. Therefore, transstate cooperation is a crucial necessity. It is a common problem that many actions focus on the recruitment process only. However, the decision to move and use irregular channels takes place at the country of origin. Not only the reasons for this decision, but also the help for returning migrants and victims of human trafficking are often being ignored. The management of this circle is one of the key challenges in Cambodia. Chou pointed out that it is also the task of the government to provide the potential migrants and victims with knowledge and assist them. Otherwise these people are highly dependent on brokers and extremely vulnerable. In addition, it is necessary to negotiate agreements with the countries of destination in order to ensure the safety of the migrants. The third problem for Cambodia is the comparatively easy border crossing due to the long borders with Thailand, Laos and Vietnam. Mrs. Chou underlined that the government released a new law in 2008 to tackle migration and human trafficking related issues. This led to the introduction of new measurements which are constantly being reviewed. In the future all measurements will be coordinated by the Ministry of Education to ensure policy coherence.

During the open discussion, Chou emphasized that the Cambodian government has started to implement reforms over the last years. These reforms will require some time to produce visible results. This is in particular the case for measurements to fight corruption and improve law enforcement. The government draws its lessons from such experiences and is constantly learning. For instance, there is an attempt to provide further services through decentralized offers such as job centres.

The participants of the conference welcomed this kind of informal exchange and agreed that the limitation of irregular migration and combat against trafficking in human beings require more international cooperation. This cooperation should be not only between states, but also between enforcement agencies, policy forces and prosecutors. Especially sharing of information and joint cross-border capacity-building programmes need to be enhanced and improved.

Besides recruitment agencies, companies have to be included in the process. For example, the aspects of working conditions and exploitation could be included in corporate social responsibility strategies. With regard to the recruitment sector, it is important to be more open-minded towards their engagement. Negative stereotypes and exclusion of agencies from the process due to their profit character will hinder a comprehensive response.

Further attention has to be paid to maintaining a good balance concerning the regulation of migration as overregulation and too many restrictions might results in more migrants using irregular channels. Often these people do not see themselves as victim of human trafficking or smuggling as their situation in the countries of destination is much better than before their departure. A warning example should be the tightening of asylum policies in Australia which will have a severe impact on migrants from Southeast Asia. This balance has to be accompanied by an improved protection of the victims. For instance, double victimisation through several testimonies and prosecution of victims for crimes committed under force should be prevented.

A general problem for law enforcement is the structural corruption. Fighting corruption also requires a certain level of creativity. Organizing queues at immigration counters in the form of a wiggly line instead of a row line can avoid a pre-selection of a particular officer. In addition, immigration officer should be replaced and shifted regularly to prevent the formation of networks.

Finally, besides the root causes for the vulnerability of victims, the demand side has to be addressed as well. As long as there is demand for prostitution, cheap labour and a lack of prosecution of companies employing irregular migrants, human trafficking and smuggling of irregular migrants will persist.