by Rey Padit
The 9th batch of KASYP (2018-2019) has concluded its final training in Germany last 25-31 August 2019 with 17 participants (9 males, 8 females) representing 7 Asian political parties and 7 countries namely Bangladesh, India, Malaysia, Mongolia, Myanmar, Nepal, and the Philippines For this batch, there were 6 completed political projects including individual and group work.
November 7, 2019 Ordering Information 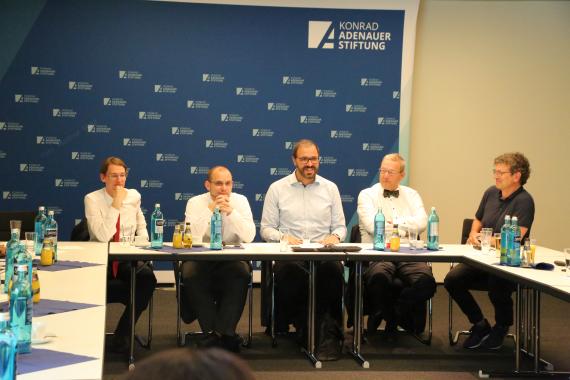 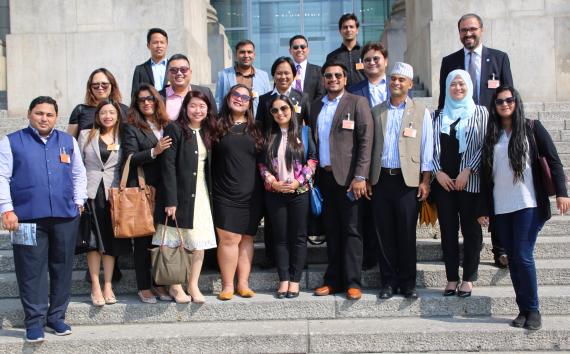 KASYP Group Photo in front of the Bundestag 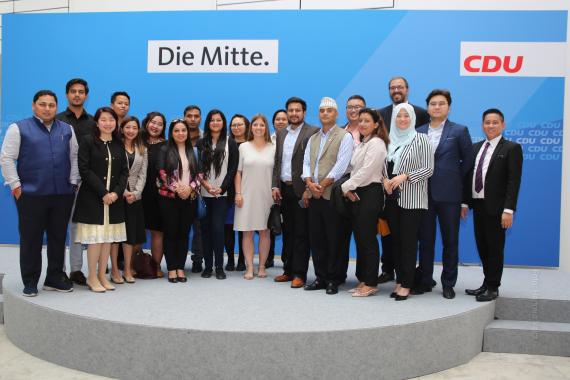 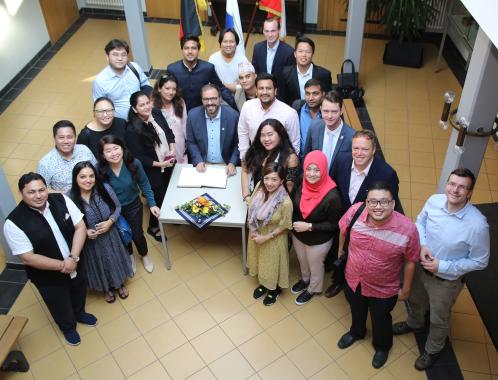 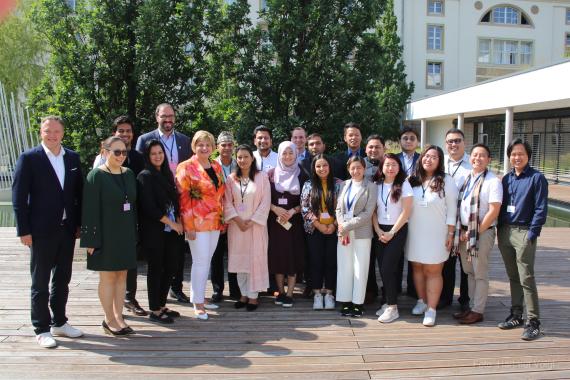 KASYP Group Photo with the Speaker of the Thuringia Parliament 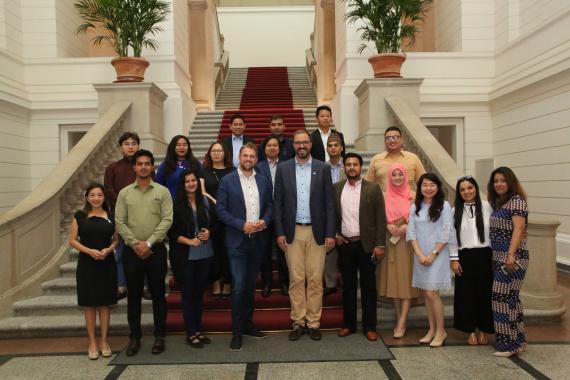 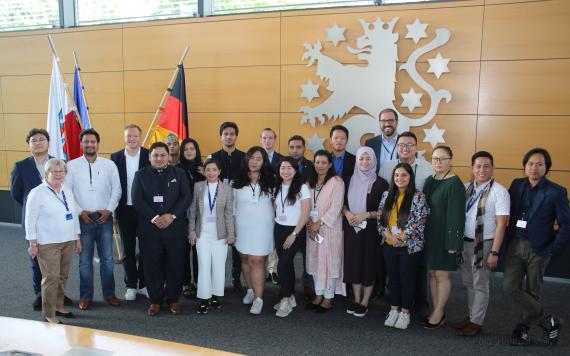 KASYPers with Prof. Dr. Mario Voigt at the Thuringia Parliament

The 9th batch (2018-2019) of the Konrad Adenauer School for Young Politicians (KASYP) has concluded its final training in Berlin and Thuringia, Germany last 25-31 August 2019, with 17 participants (9 males and 8 females) representing 7 countries namely Bangladesh, India, Malaysia, Mongolia, Myanmar, Nepal, and the Philippines. As a concluding training of a two-year programme, the design of the KASYP Germany’s programme was a mixture of different platforms to ensure more practical and experiential learning for the graduating class. The programme included lectures, dialogue with German politicians and civil servants, site visits, cultural-historical appreciation tours, and political meetings. Overall, the entire study visit was aimed at having a better understanding of the socio-political contexts of German democracy and the principles of subsidiarity, a broader international perspective, and a stronger commitment to international cooperation and democratic values through observing and experiencing good examples from the country.

The programme kicked-off with a historical guided city tour of Berlin followed by a welcome dinner on the first day.

The first leg of the study visit was conducted in Berlin where participants had the opportunity to gain new ideas, observe how these ideas are operationalised, and experience how the German system works. These new insights were supplied from the lectures on various topics such as the 2030 Agenda on sustainable development goals delivered by Ms Martina Kaiser (Desk Officer for SDG, European and International Cooperation); political participation presented by Dr Jochen Roose (Coordinator for Surveys and Party Research); and social market economy talk by Mr Martin Schebesta (Economic Policy Team).

Apart from lectures, the group went for a visit to the Christian Democratic Union Federal Headquarters to discuss with party leaders on the “strategic challenges for big tent parties and Germany’s role in the world”. During this visit, they also learned about the opportunities for participation in political decision making and challenges for young politicians from the sharing of Ms Nathalie Herberger (Political Desk Officer of the Office of External Relations of CDU Germany). Another experiential activity was a guided tour of the German Federal Parliament (Bundestag). It was the most exciting and meaningful tour for the participants where they had the chance to see for their own eyes the seat of power of the German Federal government. In addition to the tour, the group had a dialogue with some political staffs of the Members of Parliament. The team had a lively interaction with Ms Eva Keldenich (Managing Director of the Group of Young CDU MPs), Mr Patrick Moss (Office of MP Mark Hauptmann), Dr Adrian Haack (Office of MP Paul Ziemiak), and Ms Lisa Schutt (Office of MP Philipp Amthor). The exchanges among them varied from topics on Asian and German politics to managing intricacies of different bureaucracies, political party functions, and cultural matters too like food, travel, and traditions. The last site visit of the first leg was a guided tour of the Berlin City Parliament, where the participants had a dose of inspiration after having a meeting with Mr Danny Freymark (Whip of the CDU group in the House of Representatives). As always, Mr Freymark delivered a very convincing sharing of his political life journey which established a strong connection with the participants who are also young as he is.

The first leg of this training module ended up with a meeting with some members of the KAS European and International Cooperation Department and the Asia Pacific Team, led by Dr Peter Fischer-Bollin (Deputy Head of Department European and International Cooperation) and Dr Peter Hefele (Head of Asia & Pacific Team European and International Cooperation) to exchange notes and feedback on the works of the foundation in countries represented by the participants. Moreover, 2 initiatives from the 6 completed political projects of the participants Mr. Ms Charu Pragya from India shared her success story in setting-up legal clinics across the country where a volunteer of lawyers offered free legal services to women. While the delegates from the Philippines, Ms Regine Rodriguez, Ms Melagne Dianga, and Ms Hasminah Dimaporo presented their information campaign on federalism in the Philippines. Lastly, initial results from the on-going impact evaluation study of the KASYP training programme Ms by Ms Maria Isabel Villanueva who was commissioned to conduct the research.

For the second leg of the programme, the group travelled to the State of Thuringia to continue the study visit. There is no better way to understand and appreciate how federal system, the social market economy, and political party works for the whole country, without observing the experience of the people on different levels of society and in this case, on a state and town level.

The first order of business in Thuringian was a visit to the Thuringian Government Office, State Chancellery, and the Thuringian Parliament. It was a humbling experience for the participants to have experienced the hospitality, wisdom, and hear the insights of Ms Birgit Dietzel who is the Speaker of the Thuringian Parliament. She shared her own struggles and victories as a female politician and how she succeeded in forming a government by building a consensus among different political parties. From the State level, the group was fortunate enough to see how town levels are being governed in Germany. They visited the town of Burgel and was received by no other than the Mayor, his Honorable Mr Jonhan Waschnewski. It was an easy connection among participants with Mr Waschnewski. Coming from the same generation, they share the same challenges that the world is facing now, but at the same time, share the same enthusiasm and optimism on how they can help solve these problems as young political leaders.

Apart from these political meetings, there were other site visits to and meeting with Mr Ulli Sondermann-Becker (Chairman of the Thuringian Regional Press Conference), Mr Tino Zippel (Deputy Editor-in-Chief of Ossthuringer Zeitung), Prof Torsten Oppelland (Associate Professor of Political Science, University of Jena), and Ms Kristin Holzhey (Assistant to the CEO, Jenoptik).

Finally, one of the most significant experiences of the participants was meeting Prof Dr Mario Voigt, MdL and Mr Mark Hauptmann, MdB who have been the long-time trainers and partner of KASYP. As always, the two German politicians have continued to share their political life journey and inspired the young Asian politicians to continue their public service in their countries and become the agents of change for the better. The final interaction was also crucial in deepening the connection among these young political leaders despite the diversity of their backgrounds.