Translation of relevant decisions of the German Constitutional Court into Bosnian

The publication is inspired by the German book “Decisions of the German Constitutional Court: A Study Collection” by Prof. Dr. Jürgen Schwabe. In cooperation with Prof. Dr. Šarčevič from the Law Faculty at the University of Leipzig, the RSP SOE edited and expanded the collection to better meet the needs of the region. It now includes about 170 decisions related to the essential fields of the German Constitution: Constitutional dogmatics, the basic rights, the principles of state structure, jurisdiction, especially the compatibility of legislation with the Basic Law, and basic rights in legal procedures. In addition, the collection contains a section on the involvement in International Organisations. Professor Šarčević contributed also a detailed introduction.

The publication primarily addresses judges and research staff at the constitutional courts of the Western Balkans, but is also intended for other constitutional law experts in the region and is hoped to become a useful tool in all of the abovementioned areas. The collection offers systematic access to the decisions made under German constitutional jurisdiction, which holds a high reputation due to its quality and consistency – not just in Germany.

Two more edition in this series are still pending: The translation into Albanian and the one into Serbian. The Macedonian edition has already been released. The RSP SOE has presented the book to a broad audience in the Western Balkan on the 27th and 28th October 2009 at the regional Constitutional Judge Conference “Constitutional Jurisdiction in Theory and Practice”. The conference was the main project on the program's focus "Strengthening of the Constitutional Judiciary" in 2009. The opening speech was held by the guest of honour, Prof. Dr. Dres. h.c. Hans-Jürgen Papier. Further information about the conference can be found at www.kas.de/Verfassungsrichterkonferenz. 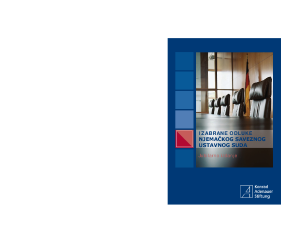