Corruption and Anti-corruption in the justice system

The publication represents an invitation to dialogue addressed to experts and political decision-makers, but also to every person who is affected by the public debate on the fight against corruption and by the reform in the justice system. Judge Danilet’s book describes the most common practices by which corruption in general takes shape in the justice system, offering thus a guide to those who want to identify and understand the different forms of the corruption phenomenon. This is also an attempt to systematize the international, regional and local anti-corruption instruments in order to emphasize the best solutions for the integrity issues with which the Romanian justice system is confronted nowadays. The current publication can be a useful instrument not only for judges, attorneys and court personnel, but also for all the professional categories in the public system. We hope that Mr. Danilet’s book and the debates it will lead to will contribute to the creation of a critical mass which will contribute to the development of adequate anti-corruption policies in the justice system and thus to the consolidation of a transparent, efficient and impartial juridical system, which also represents one of the main aims of the Rule of Law Program South East Europe. 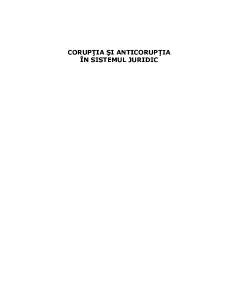