With a Preface by Stefanie Ricarda Roos, PhD

The publication at hand is the result of an international expert conference on the topic which was organized by the Political Science Research Centre Forum, Zagreb in cooperation with the KAS-Rule of Law Program South East Europe in Zagreb (Croatia) on May 24, 2007. It collects contributions of lustration experts from Albania, Bosnia-Herzegovina, the Czech Republic, Croatia, Hungary, Serbia, and Romania.
January 22, 2008 Ordering Information

The title of the publication implies one, if not the most important goal of lustration which the Council of Europe in one of his reports on dealing with the communist past has summarized as follows: "Lustration is meant to create a breathing space for democracy, where it can lay down roots without the danger that the people in high positions of power will try to undermine it. ... The aim of lustration is not to punish people presumed guilty – this is the task of prosecutors using criminal law – but to protect the newly-emerged democracy."

1. Lustration and Acces to Files in Central Europe, by Gabor Halmai

3.In Search of a Theoretical Framework of Transitional Justice: Toward a Dynamic Model, by Raluca Ursachi

4. Elite Groups in the Waves of Democratization and Lustration, by Andelko Milardovic

6. Dilemmas of Transitional Justice in post-1989 Romania, by Dragos Petrescu

as a Political Project, by Vladimira Dvorakova

8. An Unsuccessful Attempt of Lustration in Serbia, by Vesna Rakic-Vodinelic

9. The ROle of Civil Society and Anticommunist Political Actors in the Romanian Transitional Justice Partial Failure, by Raluca Grosescu

10. Stifting Through the Past: Lustration in Reunified Germany, by Katy A. Crossley-Frolick

11. Lustration and Vetting Process in Bosnia and Herzegovina, by Jakob Finci

12. The Limited Opening of the Files in Albania, by Neviana Dosti 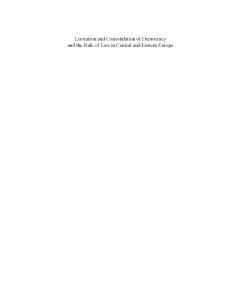