“A random searchlight, but no beacon” – Media and Conflict in Yemen

INTERNATIONAL WORKSHOP FOR JOURNALISTS AT THE DEAD SEA

In national as well as international conflicts media have great manipulative power. In Yemen, too, the different conflict parties are exploiting newspapers and television channels in their struggle for political influence. Against this background, the Regional Office Gulf States has invited journalists from Yemen, other Arab countries, Europe and the USA to analyse how narratives propagated by local, regional and international media contribute to the escalation of violence within the country.
May 31, 2016 Ordering Information 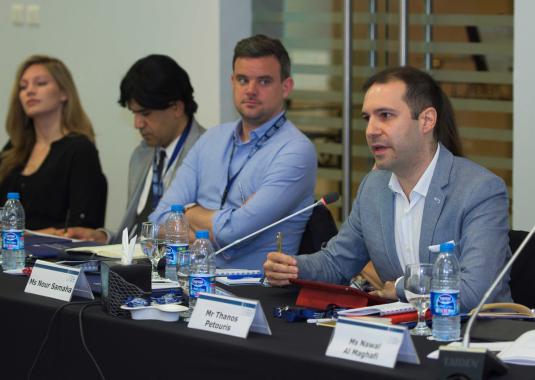 KAS_RPG
Yemen researcher Thanos Petouris (on the right) focuses on the difficult role, South Yemen plays in the ongoing conflict. Against the backdrop of increased polarisation between Houthi rebels and internationally recognised government, the interests and demands of the population of this formerly independent part of the country are said to have been marginalised. On the left: Peter Salisbury, experienced journalist for Yemeni affairs and Associate Fellow at Chatham House. 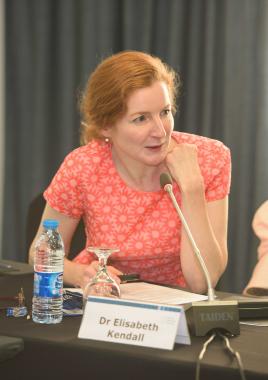 KAS_RPG
Dr Elisabeth Kendall, Senior Research Fellow in Arabic and Islamic Studies, Pembroke College, Oxford University, sheds light on “Al Qaida in the Arabian Peninsula’s” (AQAP) fundamental change in media strategy. She concludes that it is AQAP’s goal to market itself as a political actor who is capable of governing the country effectively. 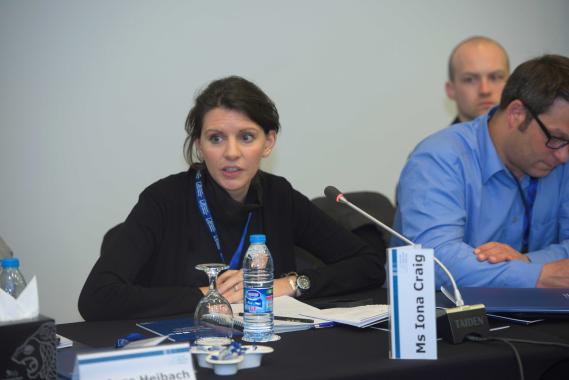 KAS_RPG
Iona Craig, winner of the Orwell Prize for political writing, gives her account of the tremendous difficulties that journalists covering Yemen face. In addition to the destroyed infrastructure, live coverage has to be avoided due to security reasons. Rarely do journalists receive reimbursement for their transport and living costs when travelling to the war-torn country. 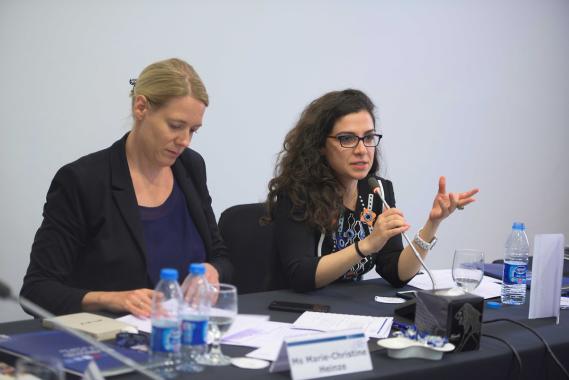 KAS_RPG
Maryam Jamshidi (on the right) introduces participants to the online magazine “Muftah”. The American lawyer established Muftah to create a platform for more nuanced coverage on events in the Middle East. Participants’ conference papers will also be published on “Muftah” and provide readers new perspectives on the Yemen conflict. On the left: Marie-Christine Heinze, President of the Center for Applied Research in Partnership with the Orient (CARPO). 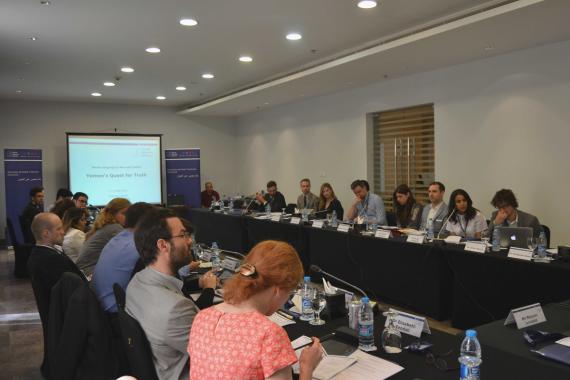 KAS_RPG
Conference participants prepare for the third session dealing with the regional context of the Yemen conflict. Via video call, journalists Hisham Al Omeisy, Baraa Shiban and Mohammed Al Qadhi from Yemen will also be taking part in the discussion. 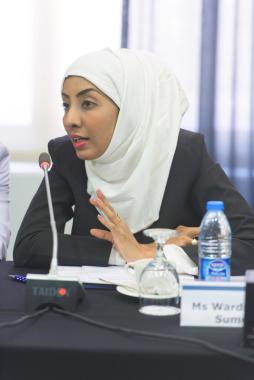 KAS_RPG
Yemeni lawyer and human rights activist Wardah Ben Sumeet explains the polarisation of the Yemeni media landscape as a result of the intensification of the civil war in Yemen. However, she remains optimistic: “Media can become a tool for peace and dialogue again”, she said. 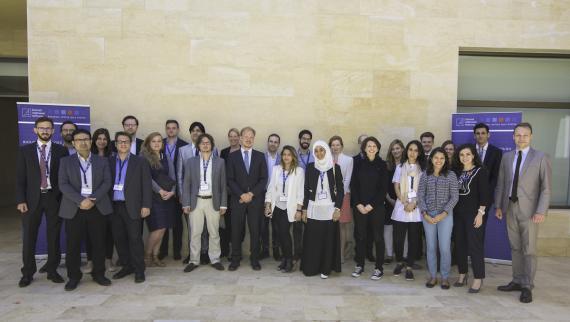 KAS_RPG
Group picture of all panellists, participants and organisers of the “Media Language in War and Conflict” conference at the Dead Sea in Jordan.

The results of the workshop were published by online magazine Muftah and can be read via the following links:

Since the failure of the peaceful transformation process in autumn 2014, many journalists had to flee Yemen and go into exile abroad. Those who have stayed in the country face increasing pressure to follow “narratives of truth” propagated by the different conflict parties. Media agencies in Iran and Saudi Arabia take up these contrary lines of discourse, enriching them with their own national ideologies. For international journalists, gaining access to reliable, objective information poses an ever increasing challenge. From May 17th to May 19th, the Regional Office Gulf States invited journalists from Yemen, other Arab countries, Europe and the USA to come together for a two-day workshop. In addition, journalists from Sana’a and Aden, who weren’t able to leave the country, were connected via video conference. The event aimed at discussing and deconstructing local, regional and international conflict narratives and to analyse them in the context of partisan interests in Yemen.

In his keynote speech, international media expert and former war journalist Jan Keulen provided an overview of the challenges of reporting about the Yemeni conflict. Based on findings by media researcher Gadi Wolfsfeld, he explained that conflict coverage is generally structured along three questions:

In the case of Yemen, it is difficult to answer any of these questions, as no objective truth exists. Instead, the different political actors are using the media as a random searchlight to shed light on singular aspects of the conflict. The proper role of the media, however, would be that of a beacon, offering orientation and interpretation for both an internal and external audience. If the media were used like this, there would be great potential to employ them for the promotion of peace and dialogue. Keulen quoted the assassinated Yemeni journalist Abdelkarim Al Khaiwani: “If we want a better future, then we have to create it with our pens. Yes, the prise is high, but the press is a tool for change. I am confident that any nation made by the ideas of its citizens would be much better than any nation forced by any ruler.”

After these introductory words, the first part of the workshop traced back the development of the media landscape in Yemen. Before the escalation of the conflict, Yemeni citizen were enjoying greater freedom of expression than many other states in the Arab world. Despite the fact that journalists were confronted with great challenges in their everyday work, media coverage was characterised by plurality and aimed at making a positive contribution to the country’s development. However, with the Houthi rebels’ rise to power the new regime took over both the state-owned Yemeni television and the Yemeni news agency in Sana‘a. Meanwhile, the former government is broadcasting from exile in Saudi Arabia. At the same time, terrorist organisations such as Al Qaeda and the so-called “Islamic State” are introducing their own narratives into the discourse. Local journalists tend to follow one of these many lines of reporting, thereby legitimising the various parties. In short, war in Yemen is not only fought with weapons, but also with words and the media, is becoming a battleground in and of itself.

The debate between Houthi and Hadi supporters is not just limited to traditional means of communication, but also gained momentum on social media, thereby reaching the broader civil society. In the aftermath of the Saudi Arabian intervention 2015, digital spaces of solidarity were forged on twitter, based on the political, religious and cultural identification with one party and the defamation of the other. This is but one example of how analogue and digital media is dominating public discourse and deepening the divides within Yemeni society. Journalists are no longer fulfilling their mandate to provide independent, objective information; to quote Jan Keulen: “truth becomes the first victim of war.”

In the second part of the workshop, the participants examined regional media coverage of the Yemeni conflict, finding that the challenges are not confined solely to Yemen’s media landscape. Iranian media focus their reporting on the presentation of the Shia minority in Yemen as victims of the military coalition led by Saudi Arabia. Consequently, Iran’s involvement in the conflict is understood as a humanitarian intervention, and Iranian soldiers are glorified as “saviours” of the oppressed. Saudi Arabian news agencies defend the Kingdom’s intervention with political and religious arguments: On the one hand, it is considered a legitimate means to preserve the national interest, on the other hand it is regarded a “sacred duty” to protect their Sunni brothers from the Shia militias. Moreover, both states are exploiting other regional media for their national propaganda: Already before the escalation of the conflict, Iran and Saudi Arabia had been propagating their diverging interests with regards to the Syrian war in Lebanese newspapers and television channels. Since the beginning of the Saudi-Arabian intervention, Hezbollah is making even stronger use of Lebanese publications in order to condemn the Saudi government. It is therefore necessary to understand current regional press coverage of the Yemeni conflict against the background of ongoing rivalries inside the region.

The third workshop section, entitled Lost in Translation, analysed international press coverage of the Yemeni conflict. Compared to other conflicts, as for example in Syria, international media interest in the Yemeni civil war is relatively scarce. Jan Keulen suggested that this might be due to the complex and multidimensional nature of the dispute, which is difficult to sell to an international audience. Second, if the conflict is covered, it is being presented as a proxy war between Saudi-Arabia and Iran. Such a simplified representation should be critically questioned: The war in Yemen began as a local conflict, which was then instrumentalised by other countries in the region. Iranian influence over the Houthi-rebels is by far more limited than Iranian influence over Hezbollah, for example.

The last part of the workshop was reserved for an exchange of ideas between a representative of UNESCO Communication and Information Sector Office Gulf Cluster and the workshop participants. Already in February, UNESCO had organised a conference on the possibility of quality journalistic work given the difficult living and working conditions in Yemen, the results of which were now presented to the audience. The majority of attendees agreed that security risks in Yemen pose great challenges to their everyday life. In addition, there are hardly any funding opportunities available for neutral, objective reporting. Organisations such as the Konrad-Adenauer-Stiftung are essential for the creation of transnational networks of support between journalists of different news agencies. The workshop in Amman was seen as one step further ahead towards the creation of such networks.

This was already the third of a series of events focusing on media, democracy and conflict in Yemen organized by the Konrad-Adenauer-Stiftung since 2014. 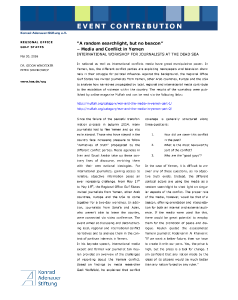 “A random searchlight, but no beacon” – Media and Conflict in Yemen (Pdf)
Download

Media Language in War and Conflict – Yemen’s Quest for Truth