With the aim of contributing to further high-level discussions on countering youth radicalization and as a follow-up to its previous conference on “Innovative Ways to Deal with Violent Extremism”, La Maison du Futur in collaboration with the Konrad Adenauer Foundation, organized this seminar, in order to provide a framework for countering the radicalization of at-risk youth populations across regional and global communities and explore new ways for preventing this new trend.
December 5, 2016 Ordering Information 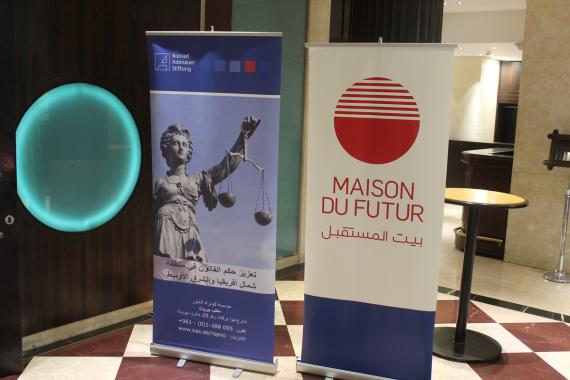 His Excellency President Amine Gemayel opened the Workshop on Preventing Youth Radicalization that has been organized by Maison du Futur in collaboration with the Konrad Adenauer Foundation's Rule of Law Program for the Middle East and North Africa. His Excellency President and the Administrative Director of KAS, Hana Nasser, welcomed the guests and the various University students that attended, and emphasized the importance of the Youth for Lebanon's future, but especially for the successful realization of a prevention of youth radicalization in tumultuous times of dynamic conflicts.

The first panel addressed measures and approaches that constitute as significant in preventing the onset of radicalization, and in reverting early radical mobilization, while recognizing that the current political and ideological environment favors the potential for recruitment into radical causes. Nabil Abdel Fatah, researcher on Islamic Movements at the Al Ahram Center for Political and Strategic Studies from Egypt, examined the role of education and religion, with a dual emphasis on education as a crucial prevention tool and influences of religious figures on the community. Makram Rabah, a PhD candidate at Georgetown University's history department, and a columnist for Now Lebanon, who analyzed the formation of Collective Memory in different contexts and underlined the importance that collectivity can play in pushing as well as preventing youth radicalization. The last panel contributor was Lea Baroudi, a political activist, certified professional mediator and founding member of civil rights NGO 'MARCH' Lebanon. She enriched the panel discussion with a presentation of a Project in Tripoli, where youth from the conflict parties of Bab-Al Tabbaneh and Jabal Mohsen were brought together in a theatre play, which truly can be considered a success story that raises hope for future developments.

In the cycle of radicalization, youth “in radicalization”, contemplating a transition from thought to action, represent the highest risk for society as well as the most difficult challenge for engagement. Rasha Al Atrash, Managing editor of "Al Modon" online, elaborated on online safety for youth and counter narratives in media, through empowering a new generation of digital citizens in an age of media radicalization. Ziad Majed, a political researcher that teaches Middle Eastern Studies at the American University of Paris joined the Panel through video connection. He dealt with the overarching concepts of Tolerance and Respect of Diversity and Democracy as well as Human Rights in efforts supporting de-radicalization among youth. Andrew Mikhael, a Consultant in political development issues joined the discussion as a post-doctoral associate from the Durham University in the UK. He draw comparisons and explained his contributions on the usefulness of coercive measures corresponding with youth radicalization prevention efforts by the UK, also with regard to former radicalization from the IRA in North Ireland. The risk of recidivism as well as the difficulties of re-integration into life and society, are at the foreground of concerns in any post-radicalization approach. The need for a comprehensive sustained approach, and the costs and unintended consequences associated were in the following discussed and examined. Sami Nader, Director of the Levant Institute for Strategic Affairs in Lebanon, who concluded the panels, guided the subsequent debate with contributions from the audience.