Constitutional Jurisdiction And Rule Of Law In Arab Countries

KAS Rule of Law Program Middle East / North Africa in cooperation with the Lebanese Constitutional Council hosted an international conference from 14th - 15th November 2014 on the topic of constitutional jurisdiction and rule of law In Arab countries taking into account the latest developments in the region.
November 17, 2014 Ordering Information 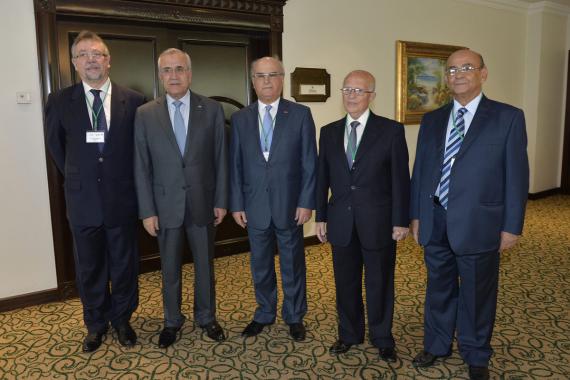 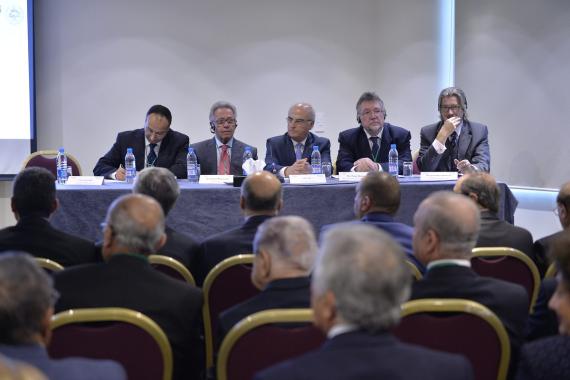 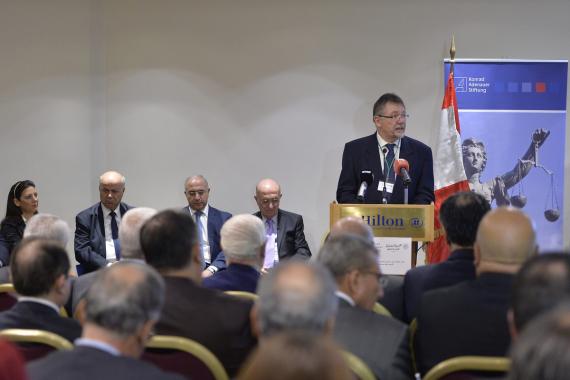 KAS Beirut
Director of the Konrad-Adenauer-Stiftung Beirut Office, Peter Rimmele, expressed his hope that this opportunity of exchange of experience would foster the development of the rule of law in the Arab countries... 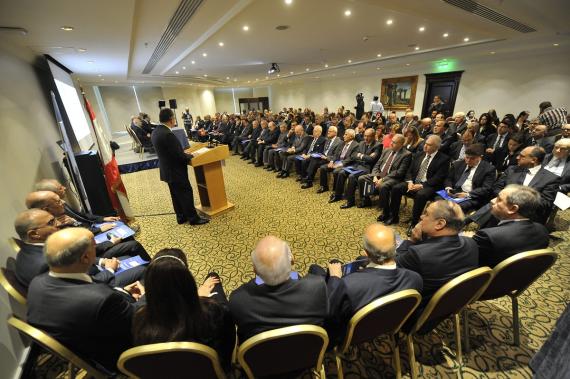 KAS Beirut
...and presented an instrument of constitutional complaint with legitimacy derived from the constitution as a mean to protect the civil rights of citizens. 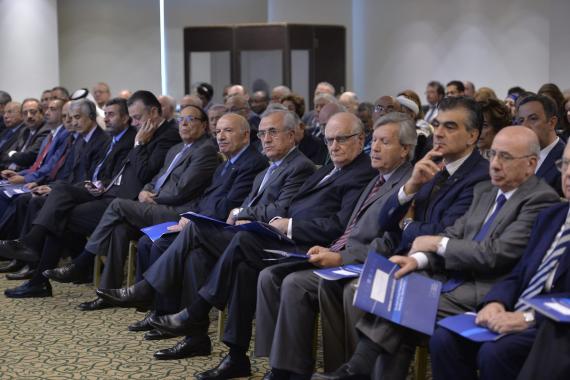 KAS Beirut
High-profile guests among the attendees, among others the former Lebanese President Michel Sleiman (middle). 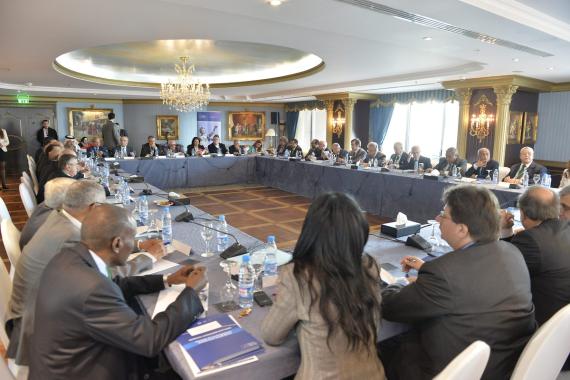 KAS Beirut
A discussion session during the conference at the Hilton Hotel Sin-El-Fil, Beirut. All participants underlined the need for democratic transformation and the insertion of additional fundamental freedoms for citizens in the constitutions, and expressed the hope that the transition will proceed in peaceful and civilized ways. 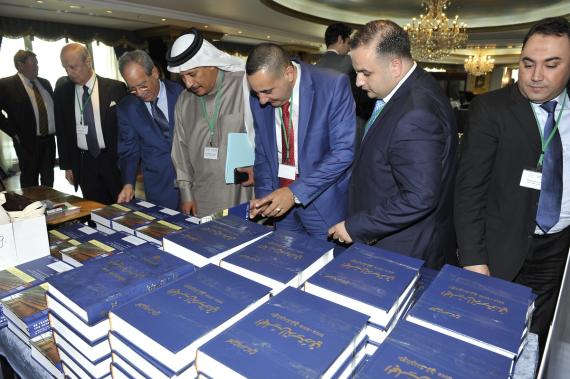 KAS Beirut
Huge interest on the book published by KAS, "60 Years of German Basic Laws: The German Constitution and its Court".

Presidents and representatives of constitutional courts and councils from the entire MENA region were invited to participate in the conference, as well as constitutional judges and lawyers from Lebanon. Several high-ranked officials attended the opening ceremony of the conference; among others, the former Lebanese President Michel Sleiman, deputies of the Lebanese Prime Minister Tammam Salam and of the Parliament Speaker Nabih Berri, as well as ministers and members of parliament, various ambassadors, and representatives of the Beirut bar association and of UNDP. The representative of the Konrad-Adenauer-Stiftung in Lebanon, Peter Rimmele, expressed his hope that this opportunity of exchange of experience would foster the development of the rule of law in the Arab countries and presented an instrument of constitutional complaint with legitimacy derived from the constitution as a mean to protect the civil rights of citizens. Opening remarks were also voiced by Dr. Rachid Medwar, representative of the Union of Arab Constitutional Courts and Councils, and Dr. Gianni Buquicchio, President of the Venice Commission, an institution of the European Council, both institutions support the constitutional processes around the world, as well as the representative of the German ambassador to Lebanon, Carsten Meyer-Wiefhausen. All of the attendees emphasized the outstanding importance of the conference.

Representatives from Tunisia, Morocco, and Egypt illustrated the often difficult process of transformation from dictatorial into democratic states, which all three countries have undergone in the last three years with varying degrees of success, and based on the local examples, indicated the important role of constitutional jurisdiction to regulate the legislation process. The new Tunisian Constitution that has been enacted in 2014, and includes also fundamental civil rights, has served as example and model in particular for the constitutional process in the Arab world.

However, it also became clear that the possibilities of constitutional jurisdiction and justice are often limited in the Arab countries. In many of these countries no constitutional court with trained judges actually exists and the constitutional oversight is done by councils, who provide advice and recommendations, but cannot make binding decisions. Also, some particular acts of the executive cannot be checked by the constitutional courts, due to lack of jurisdiction. The effectiveness of Constitutional courts is also limited, since they cannot get active by themselves, but must be called upon by political bodies by bringing up a complaint of violation of the constitution. So, not only in this are the courts subject to a certain dependency on prevailing political conditions and their activities cannot be separated from it. A large majority of the participants also expressed in this regard the broader problem of political influence and called for respect of the independence of the judiciary.

Another important issue that was raised was the separation of state and religion. Dr. Asma Ghachem, constitutional law professor at the University of Carthage, stressed that this balancing act, as it seems almost unimaginable in many Arab countries, was actually successfully achieved in Tunisia, and there is no longer any reference to Islamic Sharia law in the new Tunisian Constitution. She also emphasized that, not only religious believes, but also the freedom not to have any religion are protected by the constitution.

On the example of the Federal Constitutional Court in Germany, Dr. Jörg Menzel, constitutional law expert at the University of Bonn, presented the development of the court in Germany and its functions. Particularly the significant influence of the decisions of the court within the German society and the general acceptance by the civil population – which was partly achieved by the instrument of the constitutional complaint, that protects fundamental rights and liberties, aroused great interest among the participants. However, he recommended further on the example of the German constitution and its influence on constitutional development processes in Asia, not to copy it in its entirety, but also to take into account the country-specific characteristics. His remark received a well acceptance among those who were present.

All participants underlined the need for democratic transformation and the insertion of additional fundamental freedoms for citizens in the constitutions, and expressed the hope that the transition will proceed in peaceful and civilized ways. The participants showed great interest in the discussions and debates that followed and important stimuli for the further development of their own constitutional processes were given. At the closing session the President of the Lebanese Constitutional Council, Dr. Issam Sleiman, presented a catalog of strategies and measures that shall help in further developing an independent constitutional jurisdiction in the region.

During the event it became clear that despite the different dynamics and differences in content, the constitutional processes in the participating countries are sharing the same aim, namely to create constitutions that meet democratic requirements and value the rule of law.

For the Konrad-Adenauer-Stiftung Rule of Law Program Middle East / North Africa, the event co-organized with the Lebanese Constitutional Council was the first of its kind. To build on this highly successful cooperation, and in order to further promote networking in exchanging of rule of law-related topics, follow-up events are to be planned.