Annual Jurists' Conference 2016: The State of Democracy and Transition in Africa

The 2016 Annual Jurists’ Conference organised in partnership with the Kenyan Section of the International Commission of Jurists addressed the regression in African democracies from different perspectives. Speakers and panellists comprised of scholars, judges, politicians and representatives of the Civil Society from Africa. The discussions dealt with qualities of leadership, involvement of the citizenry in political processes and mechanisms of holding governments accountable which if left unchecked could easily lead to state instability thereby threatening national cohesion.
November 12, 2016 Ordering Information

One of the key note speakers Justice Jody Kallapen, of the High Court of South Africa and Vice Chairperson of South African Law Reform Commission reflected on the flaws of democracy that potentially disappoint and frighten the people. The role of elections in solidifying democracy came under scrutiny with questions being raised whether elections present sufficient participation in the process or is merely a matter of form instead of substance. It was observed that since many people live outside the comprehension of constitutional principles, the challenge is to show them how a democratic state works and make them understand the rules of the game in order to stop the trend of accepting anti-democratic systems for the sake of a better life. It was reiterated that the judiciary plays a preeminent role in checking the excesses of state power. It was pointed out that the constitution must be understood as a tool for transforming the society with clear manifestation of the supremacy of the law in the eyes of the ordinary people. The existence of many treaties and legal acts on their own cannot address the existing challenges unless they are sufficiently implemented and used by the citizens.

Hon. Dr. Kizza Besigye, Leader of Uganda’s Main Opposition Party, Forum for Democratic Change, focussed in his special address on the role and understanding of citizenship. He pointed out that citizens are the key actors and masters in any democracy and must therefore regain confidence to obtain power and cease fearing authority in order to hold their governments accountable. For that to be realised, the mind-set of the people must change towards a critical, independent thinking since the power of any government is over as soon as people stop obeying it. Mr. Besigye called on the jurists to support the non-violent struggle by providing pro bono services, improving the legal framework, defending activists and engaging more in public interest litigation.

In the different panel sessions, varied aspects of democratic failure in Africa were examined and potential solutions sought. Considering the promise of democracy, it was stressed that its persuasiveness must go beyond the force of a mantra and is much more than counting the votes. It was observed that elections being a key source of conflict, genuinely free choices and additional instruments such as petitions need to be provided and enhanced. To enhance legitimacy and credibility, the whole electoral process and system must be transparent. It was suggested that a combination of proportional representation and a constituency-based representative electoral system be used on the continent for fair representation.

Besides of bolstering the judiciary and the legislative power, the civil society was identified as a fundamental segment insofar as enhancing state accountability to improving of the social cohesion and ultimately contributing to national stability. In the light of the regional implications of many conflicts, strengthening solidarity networks and collaboration across borders were endorsed as being more promising than a pure national approach of civil movements. Corresponding with the qualities and requirements of leadership, the civil society’s function was identified as keeping watch for purposes of unveiling discrepancies and inconsistencies of the government and state powers. However, consistent criticism of the government can only be valid if the same standard is applied to the opposition as well. This awareness should already be present within political parties. In this context, participants stressed the role of political parties being the connection between citizens and those who govern them. They provided a sense for organisation, discipline training and preparing politicians for the offices strived for.

As far as governments are concerned, leadership was identified to be stuck between ideologies, bureaucracy and political values. The main challenge was explained to lie in transforming fragmented states in coherent communities and nations. Crucially, instead of ruling a country in auto-pilot mode, leadership should be result-based. This would facilitate the leaders to not lose sight of the concrete measures to take towards achieving definite results and for the citizens to control and value the leadership. This would also improve the conflict-ridden problem of overpromising and under-delivering by governments.

Related to the political significance of the civil society, the expectations articulated by the people must be the basis of leadership, which can only be achieved through good education and empowering of the people to help them match their expectations and shared values beyond tribe and other sectoral identification and affiliation. Due to the perception that power typically corrupts, strong mechanisms for limiting and controlling state powers must be put in place to make it possible for a country to liberate itself from a leader who goes astray. Different views were expressed concerning impunity of heads of state but there was a consensus that the general prosecution of the violation of international crimes must be undertaken without exclusions.

Justice (Rtd) Albie Louis Sachs formerly of the Constitutional Court of South Africa candidly shared his understanding of the role of a good judge based on his long experience both on the Bench and as a human rights activist. First, he pointed out that the main characteristics a judge has to bring to the court is courage, severity and creativity. Secondly, he emphasized that courts are the gatekeepers of justice and therefore a mere technical application of the law and too formalistic understanding of a court’s role are not enough. Instead, passion, empathy and human connection with public concerns and the issues in question are of preeminent importance to deeply comprehend the matter at stake and ensure justice is served. He called for continuous dialogue between judges of higher and upper courts as well as between the press and the judiciary.

The insight running through all discussions was that traditions and culture must not be pressed down and should not to be comprehended as being opposed to human rights principles. Ignoring local cultures was found to pose an imminent risk to stability and peace. Agreement was reached by reckoning the necessity of establishing self-confidence in Africa’s own abilities to transform to greatness. In summary, despite of negative developments, the conference did not stop at mourning about the flaws but produced optimistic, vibrant and practical explanations and proposals to take measures about the democratic regression.

A resolution was passed that can be found here: http://www.icj-kenya.org/jdownloads/Press%20Releases/AJCFinalCommunique.pdf

Moreover, a side event that acompanied the conference was the launch event of the publication that adresses and summarizes the issue of the Annual Jurists' Conference of 2015. The e-book "Gender Equality and Political Processes in Kenya: Challenges and Prospects (ed. Japhet Biegon)" can be downloaded here on the right side of this website. 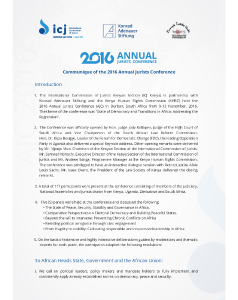 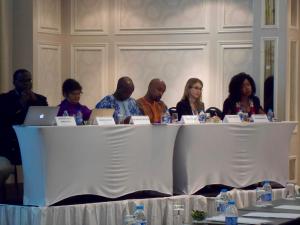 KAS
Panel Discussions at the Annual Jurists' Conference of ICJ (International Commission of Jurists) in Durban, South Africa in November 2016 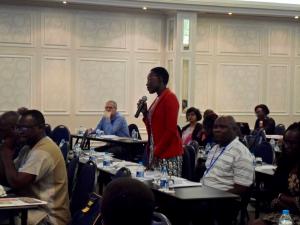 KAS
Discussions on State of Democracy and Transitions in Africa: Addressing the Regression