by
The EWoH2 sub-regional conference held in Lilongwe-Malawi on 26 and 27 February 2018 was organised with the aim of facilitating the exchange of knowledge, lessons and good practices among EWoH2 collaborating country partners of KAS, on one hand, and experts in land governance from Malawi, Namibia and Zimbabwe, on the other. It was also in part an evaluative conference to review progress, setbacks and prospects of realizing the project objectives after two years of implementing the One World – No Hunger Project in the three countries.
June 13, 2018 Ordering Information 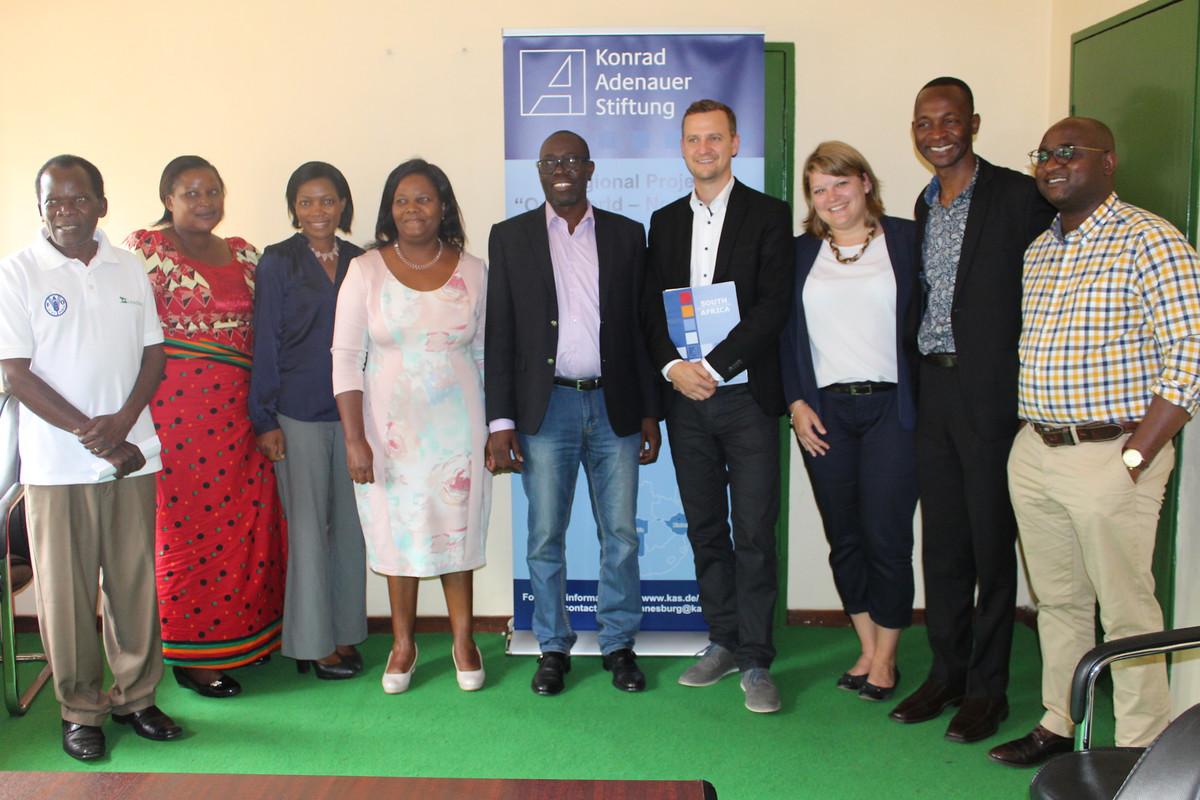 Malawi EWoH2 Project partners and the KAS Team after a media briefing on regional conference on 24.02.2018 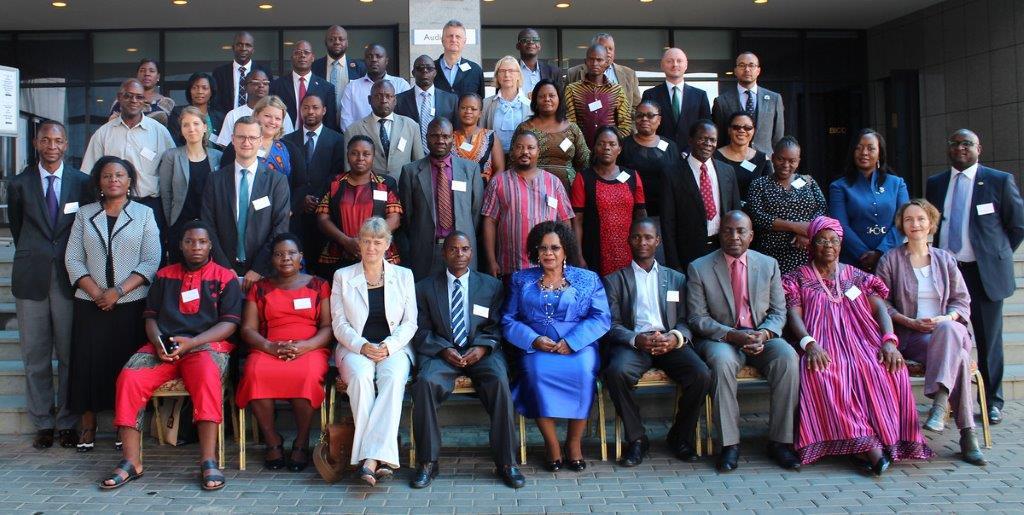 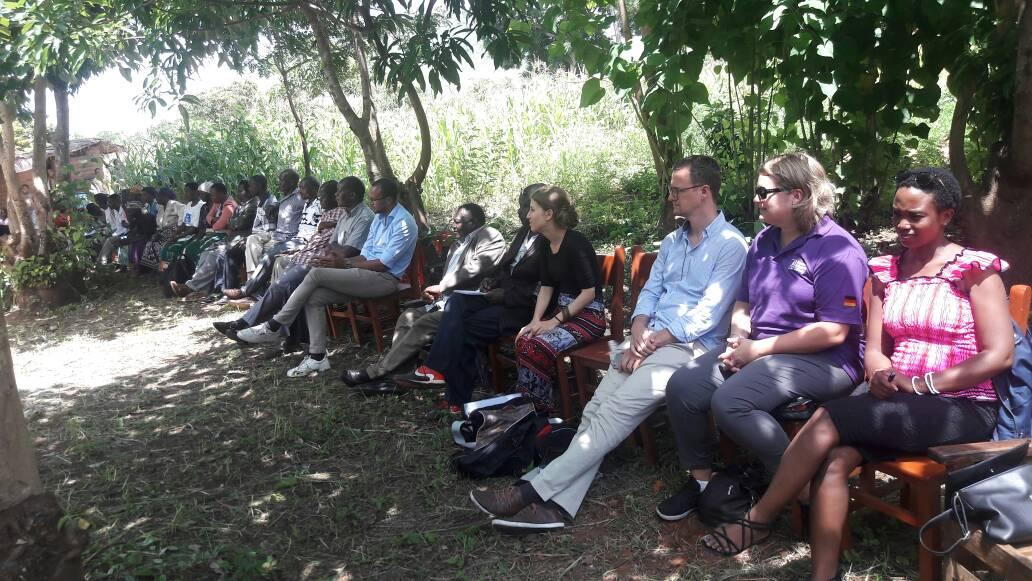 KAS Team and traditional leaders during the community awareness outreach in Zomba-Malawi on 22.02.2018 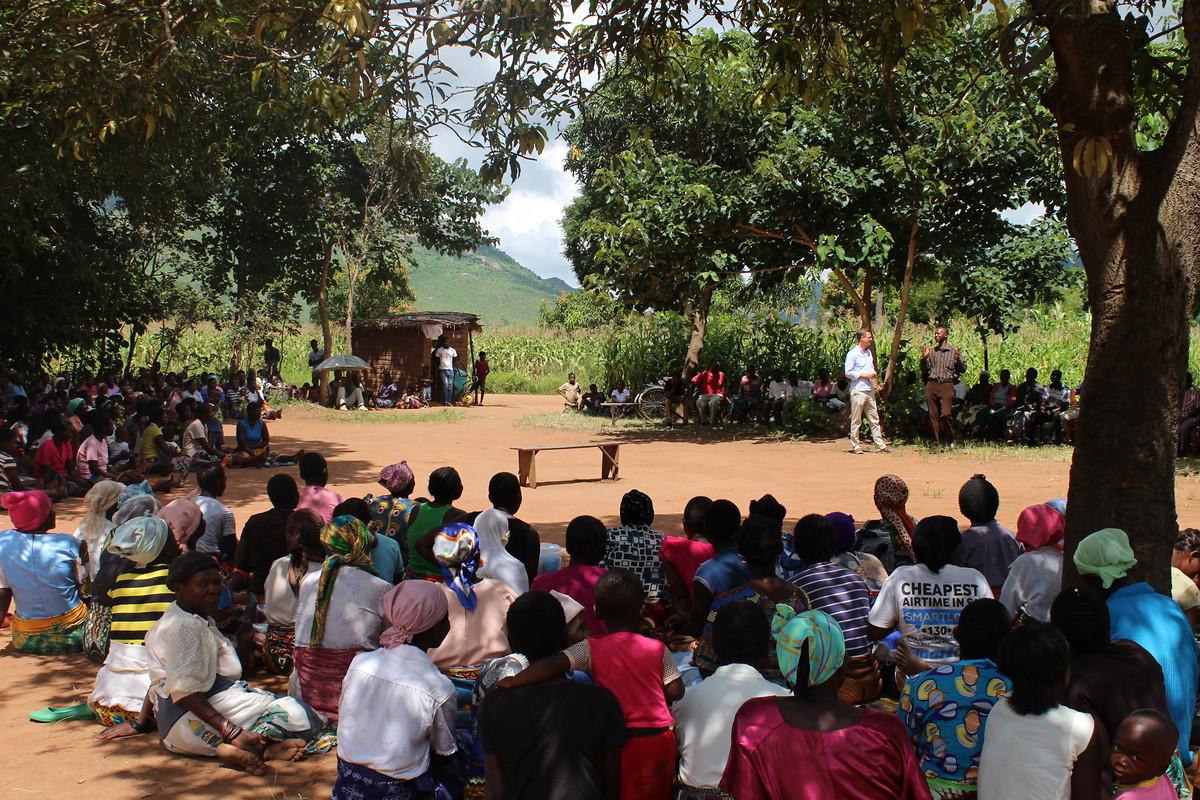 Part of the 450 participants who attended during the community awareness outreach in Zomba-Malawi on 22.02.2018 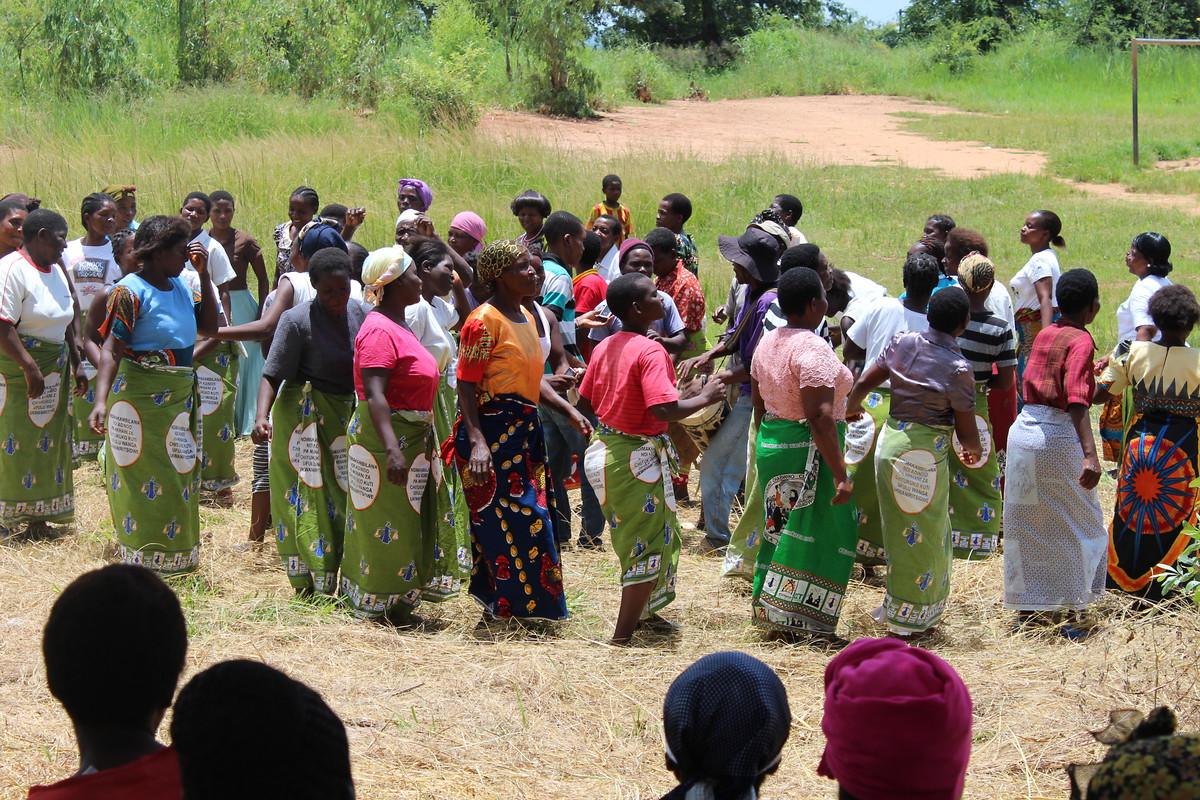 Traditional dance and songs during community awareness outreach in Zomba on 21.02.2018 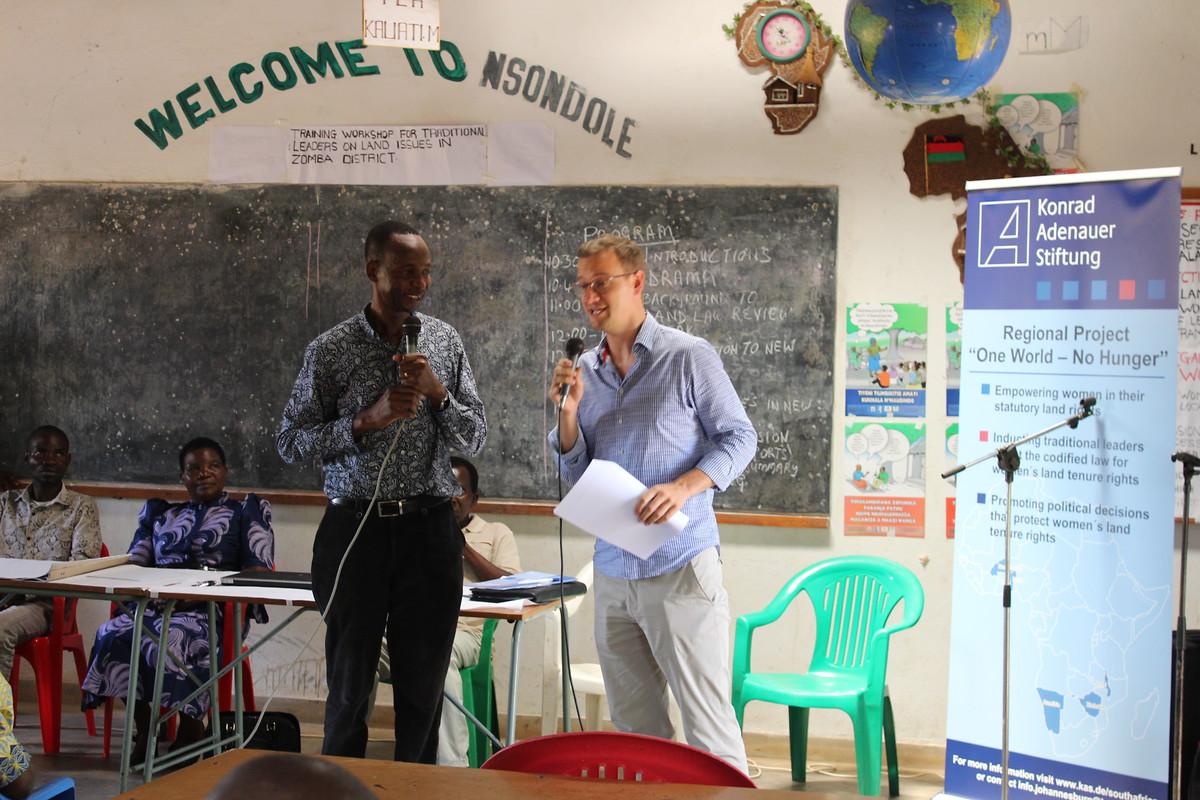 1. Rationale and intended outcome for the EWoH2 sub-regional conference

Although the regional conference was primarily organized to contribute towards the third project objective i.e. political decision-makers consider the basic interests and needs of women in land reform initiatives and the associated legislation, the combination of conference participants as well as the contents of the presentations and conference discussions were such that the other two project objectives were also being addressed. By simultaneously addressing the three project objectives it was envisaged that the conference would contribute towards the realization of the overall project goal i.e. improved, secure and just access to resources and land and land-use rights for women in sub-Saharan Africa

It was anticipated that through the conference presentations, discussions and interactions, the following medium term outcomes would be realised:

a. improved project implementation approaches and instruments shaped by the shared best practices among the participating countries,

b. enhanced knowledge and information on current and emerging developments in land politics that may in-turn shape further refinements to national land policy frameworks and land statutes towards improved customary practices, and

c. increased collaboration, networking and partnership building among partners and with government agencies in promoting equitable land governance in the three countries.

The conference was financed and organized by the KAS and was co-hosted in Malawi in collaboration with four Malawi project partners: National Smallholder Farmers’ Association of Malawi (NASFAM), Farmers Union of Malawi (FUM), LandNet and Women's Legal Resources Centre (WoLREC). The conference was preceded by a series of events which included project control field visits to Zomba by the KAS Team from Namibia, Zimbabwe and South Africa. Apart from participating in a sensitization training workshop for traditional leaders and two community awareness outreaches in Zomba, the KAS Team held fruitful discussions with the Zomba District Commissioner. Other pre-conference discussions were held in Lilongwe with the German Embassy, the Minister of Lands, Housing and Urban Development- Hon. Anna Kachikho, and the Principal Secretary for the Ministry and the country directors for GiZ and KfW in Malawi.

The conference targeted up to 50 participants In total, 47 participants attended the conference including representatives of international development agencies that support land governance projects in Malawi such as the European Union, UN-FAO and Oxfam, representatives of traditional leaders and KAS cooperating partners from the three countries, Malawi government officials, the German development agencies operational in Malawi, and KAS project teams from each of the three project implementation and the EWoH2 project managers from Namibia, South Africa Zimbabwe and Germany.

On the first day, there were four main presentations while the second day had three sessions in the following sequence.

The conference was officially opened by the Minister of Lands, Housing and Urban Development- Hon. Anna Kachikho, alongside the Deputy Head of Development Cooperation at the German Embassy, Mrs. Dagmar Krenz, In her opening remarks, the Minister gave assurance of the Malawi Government’s continued support to EWoH2 project activities in Malawi through her Ministry. Consistent with the workshop objectives, the Minister further urged conference delegates and development partners to explore and identify the best collaborating and coordination arrangements with her Ministry in ensuring the successful implementation of Malawi’s new land law. Mrs. Krenz who spoke on behalf of the German Ambassador reflected on the broad bilateral cooperation support provided by the German Government to Malawi. She added that the continued support towards fighting hunger and improved food security in sub-Saharan Africa through the EWoH2 Project was endorsed by the new coalition Government in Germany. On their part, the KAS Resident Representatives for South Africa and Namibia took turns to welcome the conference participants and providing the background information and rationale to the regional conference.

Following the official opening speeches, Dr. Henry Chingaipe, a governance and development expert Consultant made his keynote presentation themed “Unlocking land ownership and land tenure rights for women across Africa’s patrilineal and matrilineal society: obstacles and progress.” He premised his power-point presentation on the basis that issues of land governance have gained prominence in the discourse on property rights in Africa, emphasizing cardinal aspects such as access and control in land ownership. His presentation further expounded on how traditional customs and statutory institutional arrangements simultaneously create rules, processes and structures, which define and inhibit competing land ownership interests and rights. He stressed that land categorization across countries is a fundamental template by which land ownership rights are derived and sustained. He however stressed that notwithstanding the land law reforms in most African countries; customary traditions remain the major determinant to property and land inheritance rights through matrilineal and patrilineal customs. Thus, customary traditions have systemic biases that work against women’s land ownership rights than they do for men. He concluded his presentation by pointing that efforts to promote land tenure rights for women in Africa require a holistic engagement with the three aspects of social life namely anthropology, sociology and the politics of land. After the keynote presentation, there were lively debates and moderated discussions from the participants, including exchanges on examples of customary practices in the region, which conform to either matrilineal or patrilineal customs.

The two presentations for the afternoon session of the first day and first session on the second day were country presentations by Ms. Stefanie Braun for Namibia, Mr. Goodhope Ruswa for Zimbabwe and Dr. Samson Lembani for Malawi. The three country presentations were under the theme “The state of land tenure and land ownership rights for women in Namibia: lessons from baseline study, KAS interventions, interim results and expected outcomes for 2018.” They focused on the state of land law reform in those countries and highlights on their 2017 activities-including methods used and target groups reached. The presentations also gave an overview of 2018 planned intervention measures including synoptic evaluation of the achievements and challenges. After each country presentation, traditional leaders and collaborating partners from the respective countries were asked to comment, confirm or clarify on the presentations before the rest of the conference delegates would discuss the report. The plenary discussions which followed each country presentation included questions from delegates.

After the Malawi country presentation, the second session on the last day was an expert panel comprising three land experts: Dr. Chikosa Silungwe- EU Technical Consultant in Malawi assigned to the Ministry Lands, Mrs. Yvonne Mmangisa- UN-FAO Malawi Land Governance Expert, and Mr. Norman Munyikwa, Programmes Coordinator– Women and Land in Zimbabwe (WLZ). A fourth expert panelist from Namibia was unable to attend the conference. Each expert panelist presented their short reflections on the topic “Harnessing institutional synergies and support for land governance: emerging actors and progress on implementing land governance laws in Malawi, Zimbabwe and Namibia.” The panelists were responding to three points on

(b) the dominant and contested aspects of customary land laws and practices,

which are not adequately addressed by ongoing statutory, regulatory or policy reforms and suggesting any context-based structures (formal or informal) that can be utilized to engage adherents of patriarchal inheritance traditions and practices, and

The extended debates and discussions which followed the expert panel presentations gave rise to key issues which informed the discussion in the final session of the conference.

The closing session was a plenary discussion in which participants reflected on each of the following issues and points:

a) What is needed in the three project countries of Malawi, Namibia and Zimbabwe? What must be done by donor organizations and local partners?

b) Who should be the main target groups for the project? How do relationships among the various groups affect the implementation of the land law?

c) How can we stimulate, maintain and encourage targeted political level dialogue by the project in Malawi and Zimbabwe?

d) How relevant are awareness campaigns for women in the regions at this stage? Are 1-day sensitization workshops for traditional leaders in Malawi and Zimbabwe effective enough?

e) Will it be useful to have a written version of the customary laws for Malawi and Zimbabwe similar to those in Namibia?

f) Which instruments (manuals, radio programmes, brochures, comics, certificates, short films, comedy, theatre play, etc.) are successful and can be used as best practices? Which instruments would be best applied for which specific target groups?

g) Is there any role that the project has towards ensuring that the critical land laws in Malawi and Zimbabwe are in force?

h) Will the distribution of the constitution and the Land Act support the implementation/awareness raising?

From the perspective of both conference organisers and participants, the intended conference objectives were realized. The conference presentations and discussions fulfilled the desired results. Actual outcomes of the conference will however be observable through specific improvements changes that will result from project implementation, i.e. printing and distribution of brochures, comics and civic awareness materials to targeted groups with the effect of the beneficiaries being empowered enough to demand and claim their statutory rights. Other outcomes will be observed through the inclusion of the youth as a specific target group in project activities for the project to benefit both the present the next generation of women. Further, intensified search for and utilization of role models and goodwill ambassadors as change agents among traditional and civic leaders, women, men, elected duty bearers and the youth will guarantee community transformation and sustained impact of the project beyond its lifespan. Similarly, regular collaboration and exchange of information among project partners, respective government departments and improved dialogue with policy and law makers will ensure that conference gains are translated to positive outcomes in favor of women’s land tenure and land ownership rights. With one more year before the expiry of the current project cycle, it is evident that the three project objectives are being addressed by each of the EWoH2 project countries. It may be ideal that the next regional conference should take place in the last half of 2019 in order to provide more concrete evaluative results for the three years. 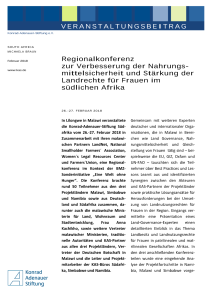